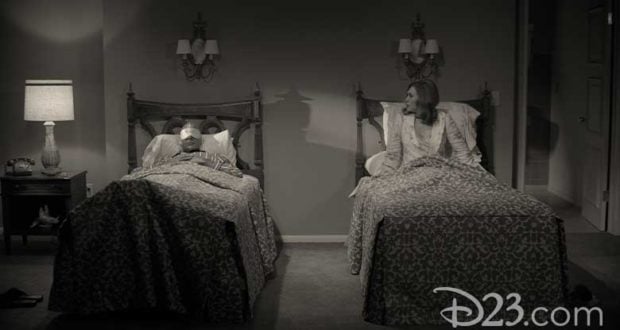 The New WandaVision Debuts on Friday: Here’s What To Know

We are thrilled for phase 4 of the Marvel Cinematic Universe to be starting on Friday with WandaVision. This is Marvel Studios’ first series for Disney+ and we couldn’t be more excited for the back to back episodes on Friday. Before then though, we have some stories from cast and creatives that will help us better understand the vision for this new era in MCU. Check out the details below as shared by D23.

1. The past and present collide in unique ways.
Each episode draws inspiration from beloved American sitcoms, beginning in the 1950s. In the early episodes, for example, Elizabeth Olsen (Wanda Maximoff) said her performance is like an “amalgamation” of Mary Tyler Moore and Elizabeth Montgomery’s roles in The Dick Van Dyke Show and Bewitched, respectively. “I think I accidentally threw in some [Lucille Ball] in the ’70s,” Olsen admitted, “just because there’s so much physical comedy.”

2. Vision is back—and different, too.
Paul Bettany was surprised when he was asked to reprise his role as Vision, given that his character died at the hands of Thanos (Josh Brolin) in 2018’s Avengers: Infinity War. And after he first read the scripts for WandaVision, Bettany said he was struck by how different Vision now seemed compared to his prior appearances in the MCU. In fact, he was a little worried about how to “keep him the same.” His concerns didn’t last long, though. “He’s always becoming something else,” Bettany said he realized. “He’s J.A.R.V.I.S., he’s part Ultron, he’s part Tony Stark. He’s omnipotent, but he’s also this sort of naïve ingenue.”

3. Wanda and Vision are now living their idealized suburban fantasy.
“I think Wanda and Vision are a couple of fan favorites because their love story is so tragic, but also really kind of warm and intimate,” said head writer Jac Schaeffer. “We’ve seen them in these really beautiful stolen moments in the MCU; it’s actually been a small amount of screen time, but very powerful and very soulful… We’re opening up the stage and space for them in this domestic sphere.” The series allows the leads to do normal things “you would never see a Super Hero participate in,” she said, like doing the dishes and befriend their neighbors. “And in WandaVision, it’s a lot of cute-cute… until it’s not.”

4. Beloved sitcoms were a treasure trove of inspiration and information.
Director Matt Shakman put the cast and crew through a sitcom bootcamp of sorts. “We wanted to be as authentic as possible. That was one of the biggest goals. Production design, cinematography, costuming, and everything was about going on this deep dive. With the actors, we all wanted to do the same thing. We watched a ton of old television episodes, talking about how comedy changes, because it really does; the approach to comedy in the ’50s, ’60s, ’70s is really different.” Citing I Love Lucy and The Dick Van Dyke Show as examples that influenced some of the earlier episodes, he said, “You can feel the energy of that sort of theatrical performance working with the audience. And then when you get into ’60s shows, like Bewitched or I Dream of Jeannie, there is a fourth wall and all of a sudden it’s much more like doing a movie these days; that laugh track is all canned and brought in. It changes the energy, the approach, the style—everything. We also worked with a fabulous dialect coach to work on how that people would sound in that era, how they would move.” To that end, Schaeffer particularly loved the “patter-patter” of the ’50s dialogue. “The rhythm of that, that sort of feeling like it was a play, I hadn’t done anything like that before,” she said. “And it was so much fun. It was like laughing gas, all the time.”

5. There’s a new girl in town.
Teyonah Parris (Monica Rambeau) is playing the adult version of a character first introduced in 2019’s Captain Marvel. “We actually do get to learn particularly what things Monica has seen and gone through and how they’ve shaped her life,” she said. “I don’t want to give too much away, because we will actually touch a lot on that through the course of the show.” Post-WandaVision, the actress teased, “We will get to see Monica join Carol Danvers (Brie Larson), Captain Marvel, and Ms. Marvel (Iman Vellani) in Captain Marvel 2.”

6. Wanda makes a new friend.
Kathryn Hahn joins the MCU as Agnes, a nosy neighbor in the suburban town of Westview. Luckily (or maybe unluckily), Hahn knew just how to play the role. “We had a neighbor who was very much like this as well, who would pop over unannounced,” Hahn said. “We would definitely pretend to be excited to see them—and it was always the worst timing!”

7. Practical effects were used as much as possible.
To honor their authentic vision, filmmakers studied practical effects and early days visual effects from each era. “I can’t wiggle my nose, so we had to figure out something else that was period appropriate,” Olsen joked, making a reference to Bewitched. “To watch our special effects team—who usually blow things up, set things on fire, and create wind and smoke—these guys became like puppeteers of things floating in the sky and dealing with magnets and different ways to make things spin. It was just so incredible to watch our special effects team adapt to the era specific ways of creating these practical effects by doing the research.” It led to some “silly” moments on set, she added. “I’m used to it all just coming together with CGI, so it was really fun to have all the practical effects there.”

8. Nothing is as it seems.
While trying to blend in with the residents of Westview, Wanda and Vision begin to suspect something isn’t right. In those moments, the tone moves away from the sitcom-specific styles of each episode. “We often talked about when we were in our period sitcoms, that when something shifted from say a Dick Van Dyke or an I Love Lucy style into something that was outside of that, it was going into kind of a Twilight Zone,” Shakman said. “We were thinking about, ‘What were the period shows that addressed the odd and the strange, and how could we embrace that?’” In fact, Schaeffer said The Twilight Zone had been an “enormous influence” on her when she was growing up. “It was so incredibly deft at that turn, right? You think you’re in one sort of thing, and then suddenly, it’s flipped on its head. We were all incredibly enamored of that,” Schaeffer said. “And then I think there are a lot of current shows right now—like prestige series—that are doing this very exciting thing where you watch a couple episodes and you think the show is one thing, and then and then by episode four or five, it flips the script. That’s really, I think, where the more contemporary references come in—in terms of kind of boundary pushing in genre.”

9. WandaVision is full of Easter eggs.
Several episodes feature “commercials” with winks to MCU history, referencing everything from HYDRA to Stark Industries. “If this is the very first Marvel MCU thing you’re watching, it’s just a strange version of a ’50s commercial or ’60s commercial that you’ll have to keep watching the series to understand,” Feige teased. But for fans who have watched all the films, he said, “You might be able to start connecting what those things mean to the past.”