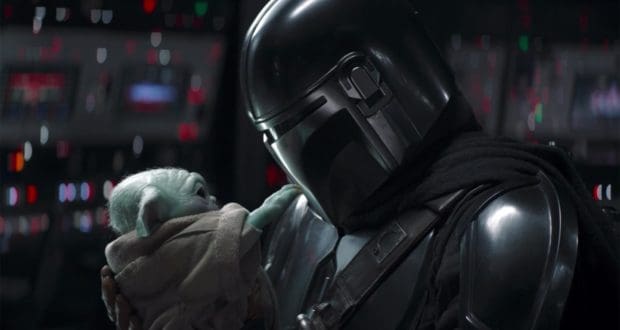 Since the Walt Disney Company purchased Lucasfilm “StarWars” fans have seen a lot of storytelling. Much of it has come with mixed reviews. The trailers always showed great promise, but there was often disappointment when the actual story was told. When Disney+ debuted in 2019, we were given “The Mandalorian”. The trailer looked fantastic, and fortunately, the series did not disappoint.

In the first season we watched the Mandalorian (aka Mando) turn from a hardened bounty hunter to a father figure. The series has a western feel, but anyone who watched knew that the heart of the story was the relationship between Mando and the Child (affectionately referred to as Baby Yoda). At the end he was quested to return the Child to his own kind. Whether that meant his species or a Jedi was unclear. Whatever was to happen, fans were hooked.

Season Two of “The Mandalorian” debuted on Disney+ on October 30. We saw the return of several characters from the first season, plus some animated characters became flesh and blood characters. The second season did have some controversy, namely when the Child ate some frog eggs that were supposed to keep a species alive. We learned that the Child’s name is Grogu. That led to plenty of fights on social media, since many people still referred to him as Baby Yoda. Whatever you want to call him, all that he has to do is peek around a corner or make a noise and there will be a collective “awww”.

In Season Two we learned that Moff Gideon wanted to use Grogu’s midichlorian-filled blood as an experiment. The Child was captured, and the Mandalorian enlisted in the help of some friends as well as former enemies in order to free him.

In Season Two we learned that Boba Fett survived the sarlaac, and Temuera Morrison took over the role. Morrison played Jango Fett in “Star Wars: Episode Two – Attack of the Clones”. Boba was an unaltered clone, and considered Jango his father. Morrison also played the clones in “Star Wars: Episode Three – Revenge of the Sith”. Seeing him as Boba Fett after all these years is one of the things that makes this series great. Lucasfilm is taking “Star Wars” history seriously.

The final episode of Season Two of “The Mandalorian” is called “Chapter 16 – The Rescue”. Mando and his group knew where Moff Gideon was holding Grogu, and they intended to get him back. They got more help and headed to Gideon’s cruiser. Things of course did not go according to plan.

In order to rescue Grogu, the Mandalorian needed to battle Moff Gideon. Mando was able to overtake Gideon, and take the dark saber from him. Whoever wins the saber in battle is the rightful leader of Mandalore, although Mando is not interested. Before that could be explored further, the robotic super soldiers known as Dark Troopers tried to take back the cruiser’s bridge. When all seemed lost, an X-wing arrived.

The next few minutes were filled with the type of action that made so many of us fall in love with “Star Wars” in the first place. A cloaked Jedi, wielding a green lightsaber, cut down the Dark Troopers left and right. The Jedi’s face wasn’t shown during the one-sided fight, but if you looked closely you might have noticed that he wore a black glove on his right hand.

When the Jedi reached the bridge he finally revealed himself. Of course it was Luke Skywalker, but I gasped anyway. Since Disney bought Lucasfilm the character has not fared well. The hero who saved the galaxy had been turned into what some have described as “the get off my lawn guy”. Luke Skywalker is my all time favorite character, and I could not stand what they did to him in “Star Wars: The Last Jedi”. I’ve been a “Star Wars” fan since 1977 in part because of Luke Skywalker. I loved the story of the hopeless small town farm boy who ended up making a bigger difference than he ever dreamed possible. With “The Last Jedi”, that feeling was all gone. I am so happy that “The Mandalorian” gave us a chance to see Luke as a hero once again.

The best part about Luke Skywalker being in “The Mandalorian” was that Mark Hamill reprised the role. At least he mostly did. Of course Hamill is much older than Luke at the time the story was set. From what I understand, Hamill provided the voice, while Max Lloyd-Jones (who is listed in the credits as “Double for Jedi”) was the physical Skywalker. CGI was used to make him look a lot like Mark Hamill did during “Star Wars: Episode Six – Return of the Jedi”. The effect mostly worked well, although you could tell that it wasn’t quite the same.

There was another cameo in “The Rescue” that I shouldn’t have been surprised about, but I still was. R2-D2 was always with Luke in his X-wing, and the droid made an appearance. In the end, Mando talked Grogu into leaving with Luke and  R2, and he took off his helmet so that the little one could finally see his face.

If this was going to be it for “The Mandalorian”, it would be a great ending. It was emotionally satisfying. Mando completed his quest by returning the Child to a Jedi, and Moff Gideon was captured. But…Disney has already announced that Season Three of “The Mandalorian” will debut around Christmas 2021. That leaves us with all kinds of questions. Will Mandalore be freed, and if it is who will rule? Will the bond that Mando has with Grogu be stronger than learning about the Force? (I honestly can’t imagine the series without the little guy.) Will Season Three still feature Din Djarin (Mando’s real name) or will it center around Bo-Katan Kryze, since she is a Mandalorian as well?

There was one other surprise in “The Rescue”. Make sure you watch the closing credits. After the normal information, there is an extra scene. It started with Bib Fortuna (played by Matthew Wood, the voice of General Grievous). He was sitting on the former throne of Jabba the Hutt. Boba Fett arrived, killed Bib Fortuna, and took the throne himself. The biggest surprise of all then appeared. The words “The Book of Boba Fett” then “Coming December 2021” crossed the screen. What??? Recently Disney announced several new “Star Wars” series that are coming to Disney+, but this wasn’t one of them. It’s a great time to be a “Star Wars” fan.

I need to mention actor Jeremy Bulloch, who originated the role of Boba Fett. He died on December 17. Bulloch was a fan favorite, and an all-around nice guy. Somehow, learning about “The Book of Boba Fett” a day later is a beautiful tribute, even though it’s a coincidence. Rest in peace.