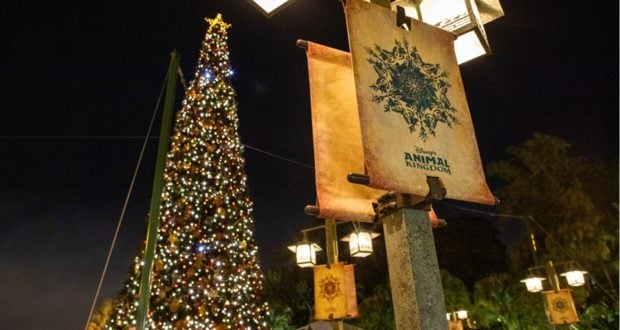 In 2019, Disney’s Animal Kingdom really upped the game when it came to celebrating the holidays. Merry Menagerie allowed guests to interact with animal puppets, and there were new decorations and other additions. Unfortunately, due to social distancing concerns, Merry Menagerie is not possible in 2020. That doesn’t mean that the Christmas Season is not being celebrated at the park. The holidays have arrived at Disney’s Animal Kingdom, and there is plenty of seasonal cheer.

The decorations start before you scan your MagicBand. Outside of the entrance you will find the giant tree. It has a dual theme, both Disney’s Animal Kingdom and Disney animals. The picture spot outside of the entrance now has a holiday scene. There are garlands and other additions on the buildings, and the sounds of Christmas favorites fill the air.

Inside the park, most of the decorations are in the main area of Discovery Island. There are no puppets this time, but there are extra bird sculptures. Last year animal inspired luminaries were added on the tops of the land’s buildings, and those have returned. They are everywhere, all that you need to do is to look up.

There are decorations in the other lands, but they are more subtle. Santa’s sleigh pulled by a banshee is back in Pandora. There are special touches in Asia and Africa. In DinoLand U.S.A. there are tinsel trees and a few other touches. Make sure you glance at The Boneyard sign for a cute Christmas addition. The dinosaur above the Discovery Island entrance to DinoLand is also ready for Christmas.

Disney promised us extras for the Character Cruises this holiday season, and these are sure to delight. You’ll find some of the regular cruises, such as Pocahontas. Other cruises have taken on a holiday twist. Disney is calling them Festive Flotillas. If your timing is right you might catch Mickey and Friends, Donald’s Dino Bash, Chip ‘n’ Dale, and Discovery Island Drummers. Click here to watch a quick video of the Discovery Island Drummers. The final Festive Flotilla is of course Santa Claus, who has a great sense of humor! He is happy to wave at everyone as he floats by. Click here to watch quick video of Santa’s Flotilla!

There are great places to watch the Character Cruises all along the Discovery River. One of the best is in the seating area for Rivers of Light. You can sit down for a while, and you will see the characters as they are both coming and going. If you’re lucky, you might be able to catch two cruises as they pass each other. There is no set schedule for the Character Cruises, but there will usually be another one soon.

One quick note about the Character Cruises. They may not take place if the weather is bad. If the weather is iffy, they could still run, but in a smaller capacity. That’s why you might not see all of the characters on a cruise if there is a light rain. It might still run, but with only one character. There’s a cover on the barges, and if the rain comes down too hard the character will still wave, but from under the cover.

Check the hours for Disney’s Animal Kingdom. Now that Standard Time has started, on some days the park is open after dark. If that is the case, make sure you check out the Tree of Life before you leave. Tree of Life Awakenings – Holiday Edition has returned. Winter scenes play out on the park’s icon. Just watch, you are sure to see a scene in a few minutes. There are many days when Disney’s Animal Kingdom closes at 5:00, which means you’ll miss out on the beauty of the park after dark. Other days it remains open until 7:00 or later, which will allow you that much more Christmas fun.