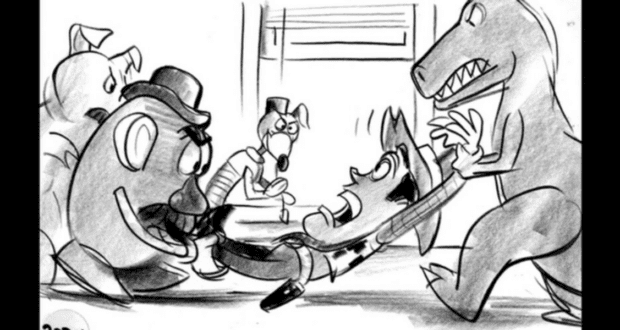 There are few moments in Disney history as fascinating as the infamous “Black Friday Reel.” The name refers to an early storyboard for Toy Story that was part protest, part attempt to appease impossible Studio direction. Disney did not yet own Pixar in the early ’90s when the film was in development, but they were in partnership. Pixar was still a fledgling company and needed Disney dollars to make it. This led to friction amongst Disney executives, who saw the film going in one (shocking) direction, and Pixar creative, who saw the film going in a different (much more wholesome) direction.

Disney intended the movie to be made for adults. They wanted dark and gritty. With every update the creators gave the studio about the film, the advice was always the same, “edge! It needs more edge!”

Pixar employees were literally working around the clock to make the film perfect and please the Studio. Director John Lasseter joked on more than one occasion that he had the best parking space at the office because his car hadn’t moved for over three days. Some of the writers and storyboard artists began to suffer from chronic insomnia. A few writers reportedly started seeing visions of Buzz and Woody taunting them on their lack of progress, chanting: “Edge! The film needs more edge!” due to sleep deprivation. 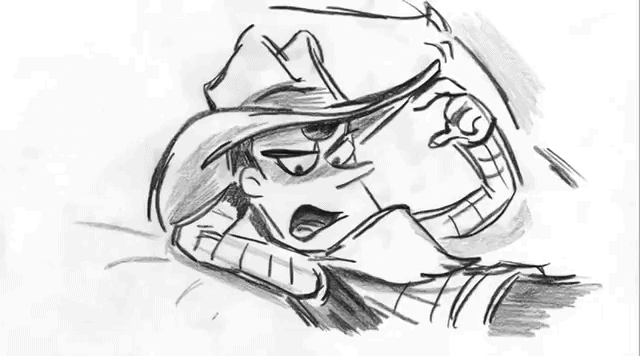 Pixar found it difficult to keep writers due to the stress it was putting on their personal lives. Many quit. By November of 1992, there were two of the five writers left, and only one of the three storyboard artists. Something had to be done. 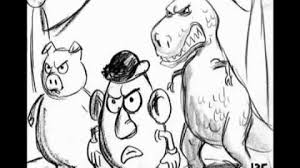 The stress was taking its toll on the team. Then came the final straw as Thanksgiving Day neared. John Lasseter went to a meeting with Disney where Disney expressed concern over the movie and threatened to pull the plug if they didn’t see progress in a week. He returned and told the team Disney was demanding a complete film in story reels (storyboards with audio) with massive revisions. Edgier! More grit! This was when things got interesting.

They’d give Disney what they wanted and make them live to regret it. The team worked furiously on the reel, day and night until what was left was nothing short of an abomination. They were (passive-aggressively) delighted. The reel was nothing like the Toy Story we know and love. Woody was a murderous villain, for starters. The toys cussed. Buzz dies. Woody makes eye contact with the audience as his flesh melts away while screaming, “is this what you want?” It’s horrible…but it was supposed to be. 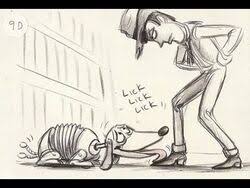 The day comes for Pixar to present Disney with the reel. It just so happens to be the day after Thanksgiving, Black Friday. They arrive at the meeting and present their reel. After it was over, there was nothing but stunned silence. Disney demanded to know what they had just seen. Lasseter explained that this was the movie they’d asked for. Roy Disney reportedly incredulously asked, “you actually listened to us?” Chairman of Disney at that time, Jeffrey Katzenberg, walked out of the screening quietly telling his colleagues, “Notes. They were following all of the notes we were giving them.”

After that, Disney considered canceling the film entirely. There was no way the reel they had seen could ever hit theaters. Instead, they decided to take a step back and let the fledgling Studio produce the movie as they saw fit. They stopped asking for edge, probably afraid of what the final produce

Curious as to what was shown? Footage is, understandably, hard to find. There is a special feature at the end of the Toy Story blu-ray edition that shows part of it (video below), but it is a very sanitized version. We managed to track down some dialog from the original Black Friday Reel:

Sergent: Cowboy, where is your honor, dirtbag?! You are an absolute disgrace! You don’t deserve to wear a 10-gallon hat on your pint-sized head! Men, search and rescue! I want a Medevac team on the double!

Woody: Hey, Spuds-for-Brains! What do you think you’re doing? Off the bed. Hey! Off the bed!

Woody: No. He is. Slinky! Slink. Slink… Slinky! Get up here and do your job! Are you deaf?! I said take care of them!

Slinky: Uh, I’m sorry, Woody, but I have to agree with them. I don’t think what you did was right.

Woody: What? Am I hearing correctly? You don’t think I was right? Who said your job was to think, Spring Wiener?!

Slinky: Well, I… I just thought that you…

Woody: Just use this vast reserve of brainpower to consider this for a moment! If it wasn’t for me, Andy wouldn’t pay any attention to you at all. In fact, my stretchy friend, you would’ve been hauled away to Goodwill a long time ago, so shut your mouth and get them off the bed! Do it. Now, Slink, or I’m throwing you off!

That is…yeah, it’s not good. We are so glad that Pixar was given back the creative reins to make the film we’ve grown to know and love! This film may have caused a buzz (pardon the pun), but it wouldn’t have cemented itself as a beloved triumph for animation history, where it belongs as the first computer-generated film. Instead, we’d be saying, “back when computer animation was new, and they did weird things with it…” instead.

2022-11-24
Jill Bivins
Previous: Could Chapek Have Been the ‘Fall Guy’ All Along?
Next: Bob Iger Sends Heart-Warming First Tweet Since His Return as CEO