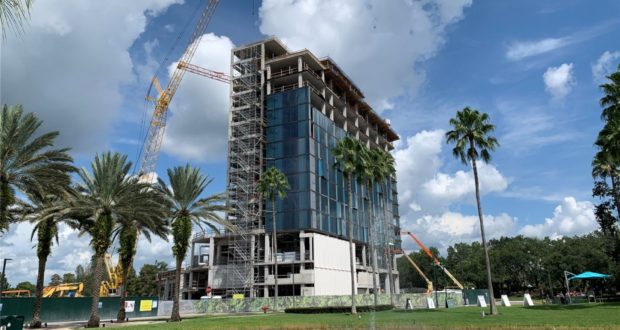 During the Walt Disney World closure most of the construction on property stopped. There were a few exceptions, one of which was rather large. A brand new building is being built in the Epcot Resort Area, and it is easy to see from World Drive. Many people assume that the new building is the Star Wars Galactic Starcruiser (the “Star Wars” hotel) but that is not correct. The new building is going to be a hotel, but it won’t have a “Star Wars” theme, and it will not be owned or operated by Disney.

The building that is under construction is The Cove. It will be part of the same complex as the Walt Disney World Swan and Dolphin Resorts, which are also not owned by Disney. They are owned and operated by Starwood Hotels and Resorts, which is a subsidiary of Marriot. That is why construction continued during the closure, because The Cove is not being constructed by Disney.

The Cove looks like it is going to be a magnificent place to stay. When finished, it will be a 14-story tower. Part of the focus will be business travelers, with plenty of meeting rooms and suites. There are 343 rooms planned, half of which will be business suites. The business suites will be able to transform into meeting areas if needed. State of the art equipment will be available for business meetings. There will also be a business center, two ballrooms, and a rooftop space.

The Swan and Dolphin are known for their dining experiences, and the trend will continue at The Cove. There will be a restaurant that can serve up to 90 people at any given time, and there will be a 50 person lounge. If you’re looking for a place to relax, there will be a lounge on the second story that will feature specialty cocktails.

Business travelers will also want to have fun, so there will be a 16,800 foot pool. It will feature several fountains, and will be surrounded by lavish landscaping. There will also be a fire pit. The Cove will have a health club as well.

Given the proximity to Epcot and Disney’s Hollywood Studios, The Cove is sure to be a favorite new place to stay for many. You will be able to walk or take a Friendship to either park, or watch the nightly fireworks from the rooftop. Fantasia Gardens miniature golf will also be just a short walk away. Disney’s BoardWalk, Beach Club, and Yacht Club resorts will also be within walking distance, opening up even more dining, shopping, and entertainment possibilities. The Cove will also be near the International Gateway entrance to Epcot. That gives guests easy access to the Disney Skyliner.

Guests who stay at the Walt Disney World Swan and Dolphin Hotels are eligible for some of the benefits that people who stay at a Disney owned resort can receive. This includes Extra Magic Hours and the ability to make FastPass+ reservations 60 days in advance. Guests at those hotels are not eligible for Disney’s Magical Express or the Disney Dining Plan. It is safe to assume that the same will hold true at The Cove once it opens.

It was originally announced that the opening date for The Cove was to be March 1, 2021. That date was given before the closure and subsequent reopening of Walt Disney World, and it has not been said if the date will be pushed back. When complete, the complex (including the Swan and Dolphin) will have approximately 2,600 rooms between the three resorts. Business travelers who would like more information can call (407) 934-4290.