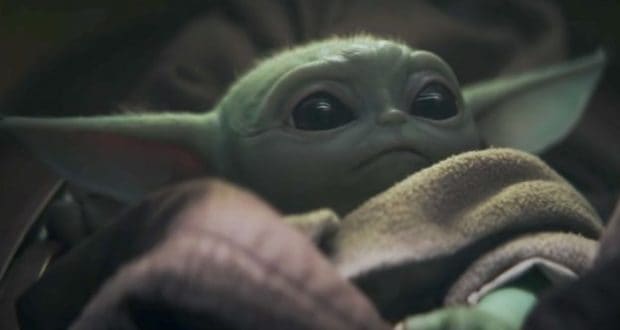 If you’re a fan of Disney+, The Mandalorian, Chapter 13 released just after Thanksgiving was an important episode. The Child (or “Baby Yoda” as many call him) had his official name revealed along with a backstory. We’re trying to adjust to the new name as “Baby Yoda” still has a nice ring to it. Take note, the information below contains spoilers from Chapter 13.

As shared by EW.com: First, we learned the Child’s name is Grogu. Let’s all sit with that for a moment. (No, it doesn’t mean you have to stop calling him Baby Yoda.) Second, we learned that the Child used to live on Coruscant and was trained by “many masters” at the Jedi Temple, then was hidden when the Empire came to power. This means it’s quite likely Yoda and Baby Yoda crossed paths. It also raises several questions, such as: Who hidGrogu? Why did they abandon him? And what happened to him afterward?

Ahsoka Tano (Rosario Dawson) explained that Grogu’s memory then became “dark” and he was alone. She ultimately declines to train Grogu because there’s anger in him after years of hiding his abilities in exile. Tano suggested Mando (Pedro Pascal) take Grogu to the planet Tython where there’s a Jedi Temple. She said to place Grogu on a seeing stone on top of the mountain and “there’s a chance a Jedi might come searching for him,” while noting there are not many left.

What are your thoughts of the new name, “Grogu”? Will you be sticking with “Baby Yoda” or making the name adjustment?