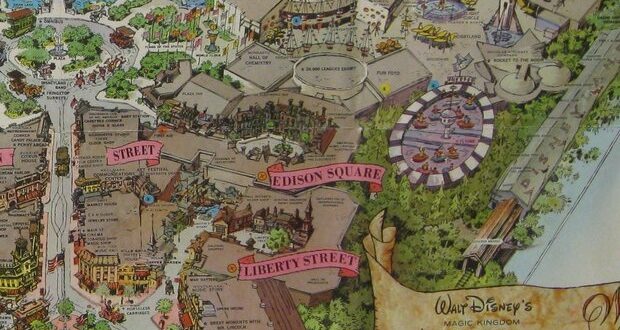 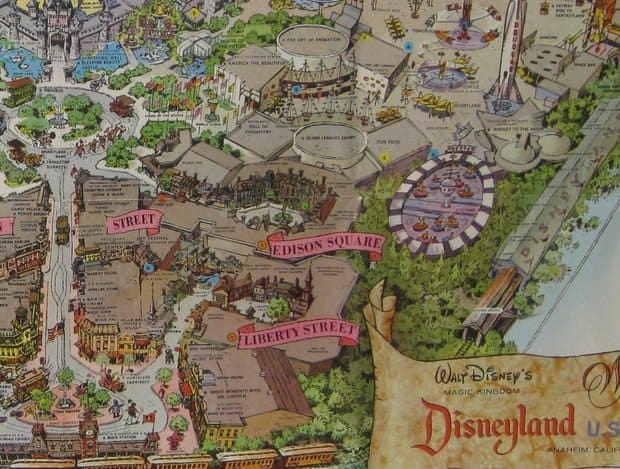 Most diehard Disney fans know that the Carousel of Progress was created for the 1964 World’s Fair, but did you know before that it was almost a very different attraction altogether? It’s true! While Carousel of Progress’ nostalgic journey through time was indeed Walt’s idea from beginning to end, he conceived the idea well before this beloved attraction’s grand debut. 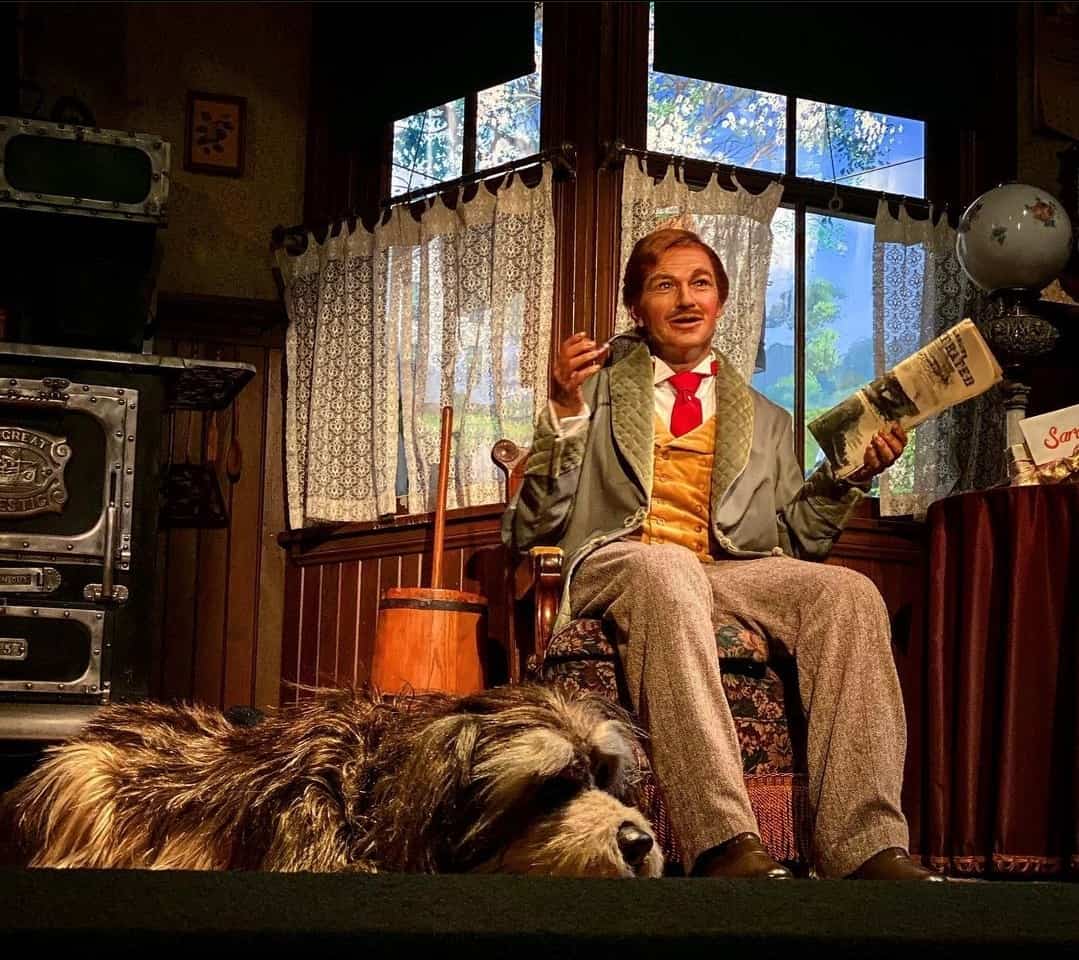 Back when Disneyland was in the developmental stages, a land sponsored by The General Electric Company called “Edison Square” was in the works. This themed land would have focused entirely on energy, electricity, and progress. Thomas Edison would have featured heavily with dioramas devoted to his work throughout the area.

With its entrance off Main Street USA, Edison Square would have flowed thematically and positionally from the early 20th century to the modern age and beyond. Guests would leave behind the gas lamps and horse and buggies of Main Street and be transported to the early days of electric lamps and automobiles. 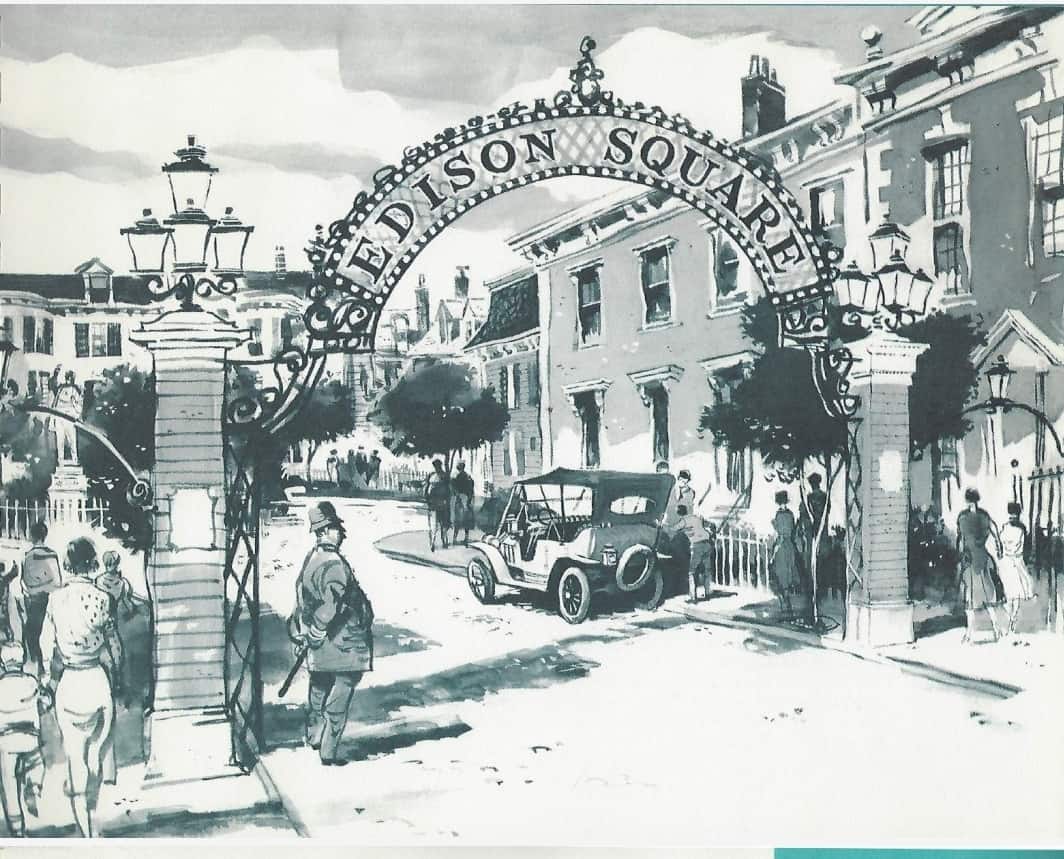 Unlike another “area that almost was” Liberty Street (which would eventually be revived from the cutting room floor and evolve into Liberty Square at Magic Kingdom), Edison Square wouldn’t have had a heavy focus on shops or dining, it’s focus would have been entirely on General Electric and the promotion of new GE products guests could return home and buy. 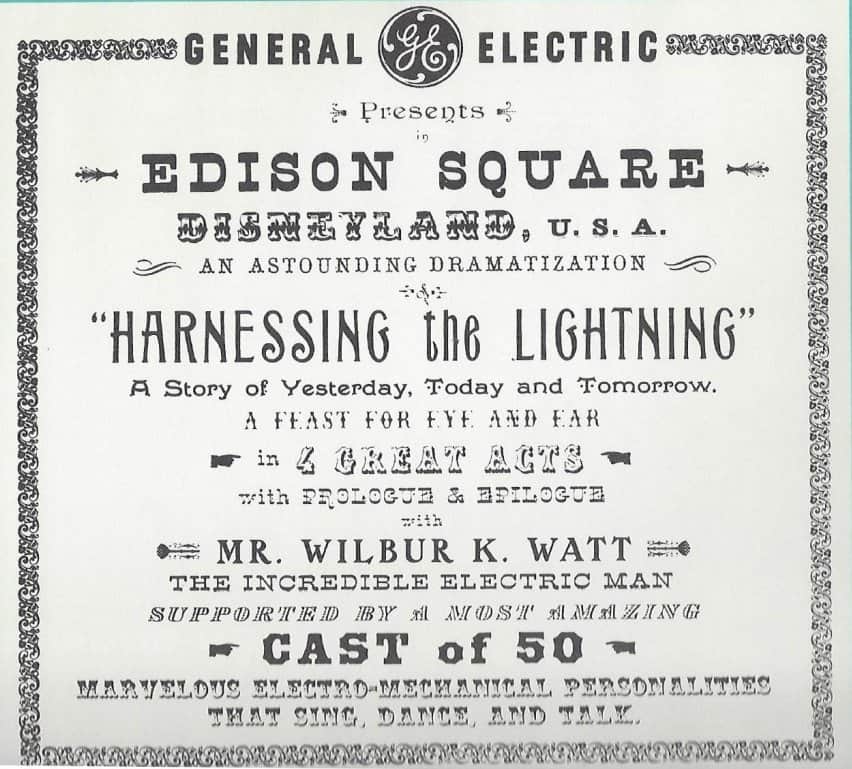 The star of the area would have been a theatrical attraction with a working title of “Harnessing the Lightning” which just like Carousel of Progress would have featured an Audio-Animatronic family throughout the 20th century. Unlike Carousel of Progress, however, this attraction would have been a walk through experience. Rather than a rotating theater, guests would travel from room to room learning about Wilbur K. Watt and Family and their marvelous electronics (does that sound familiar?).

Beginning in 1898 guests would learn about the Watt family’s life in the days of pre-electricity before moving on to 1918 with their brand new house full of electric convenience. This scene would showcase the dizzying display of wires needed to make it all possible in those early electric days (gee, that does seem familiar doesn’t it?). 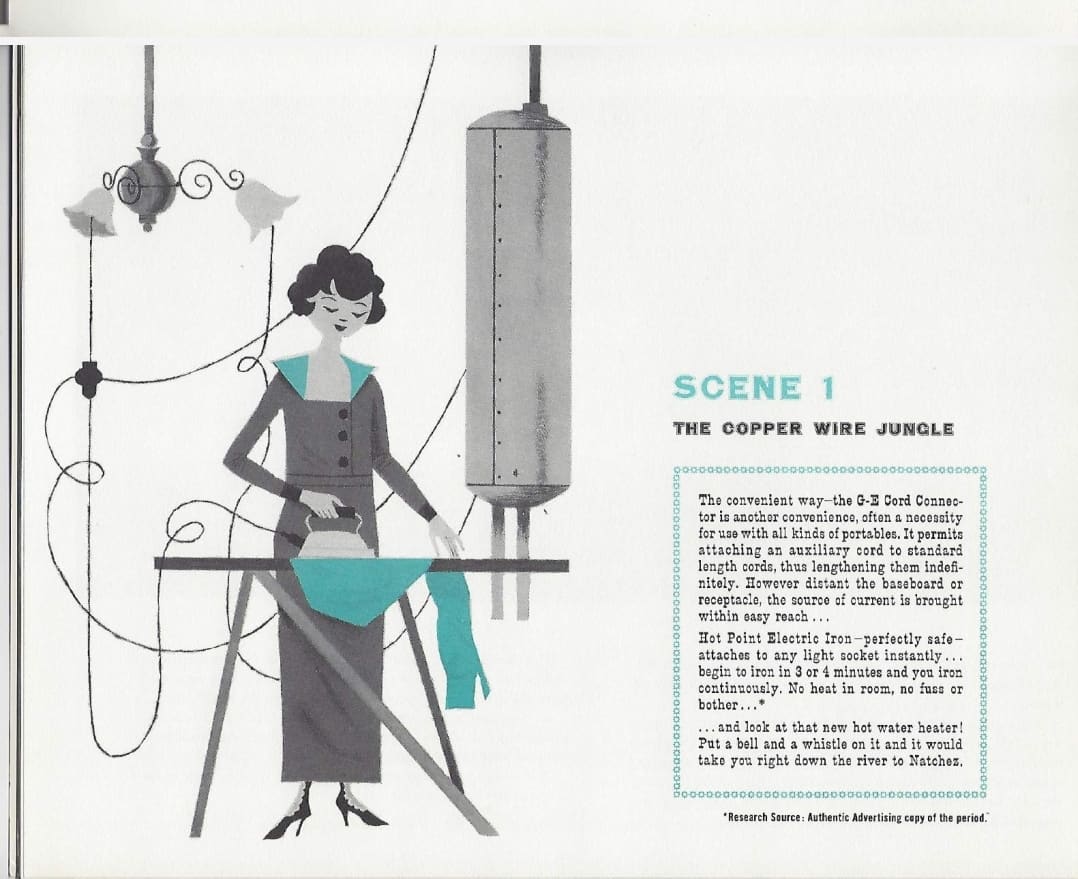 Next guests moved to 1958, which at the time of its opening would have been the modern time. Guests would see the familiar electronic conveniences of their everyday life displayed by the animatronic Watt family, including children who would be watching Mickey Mouse cartoons on their television set. 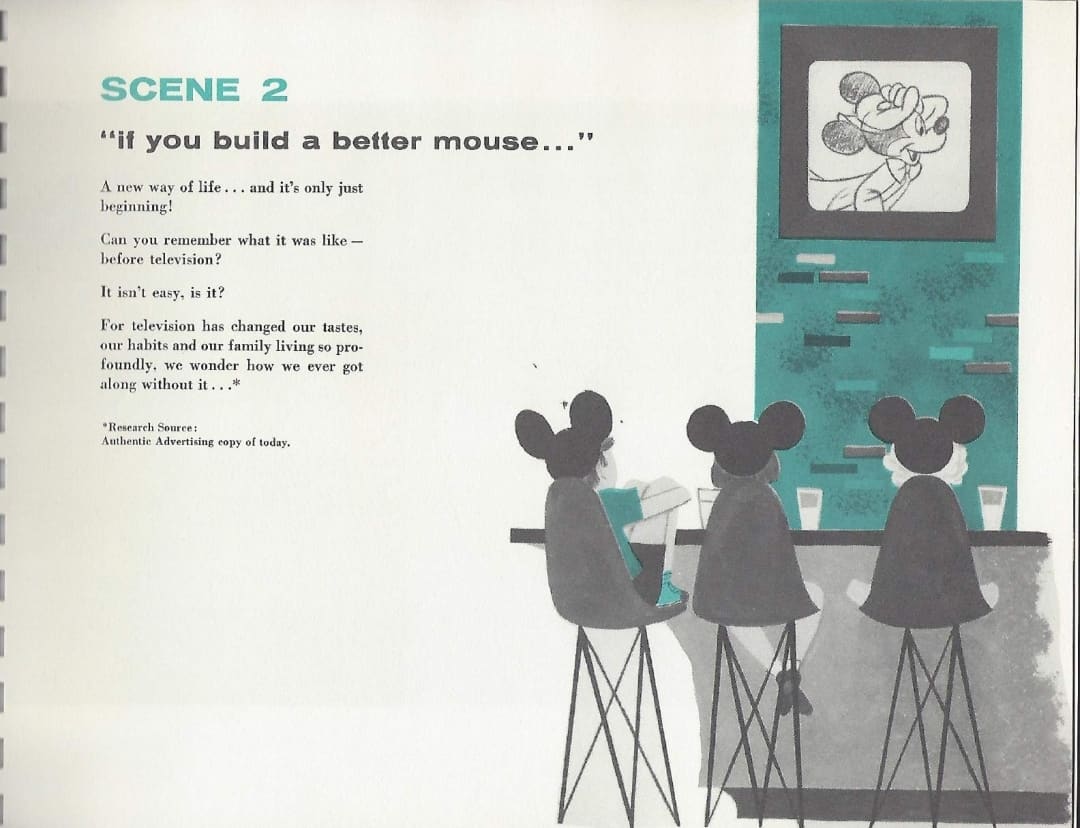 In the final scene of the walk through attraction, guests would travel into the future where, in a striking departure from the Carousel of Progress, guests would be invited on stage to try out GE products in development (ala the now defunct Innoventions at Epcot). The show would end in a showroom filled with General Electric’s latest products, harkening back to the fact that despite being rousing entertainment, the area’s main purpose was to sell General Electric products. 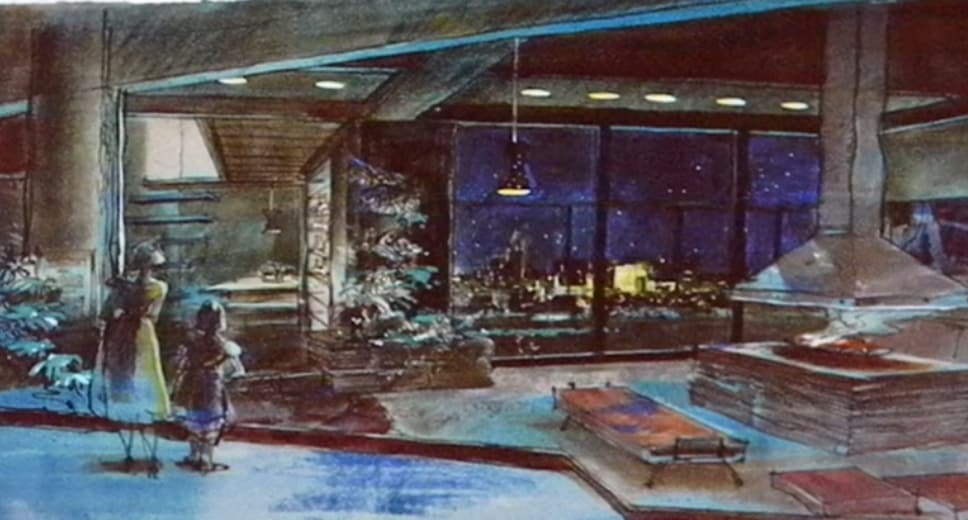 The project was riddled with complications, however. While the area was in development, the idea of Audio-Animatronics was just in its infancy and nowhere near being capable of what “Harnessing the Lightning” called for. At the time of its inception, though it was in development, the technology just wasn’t there yet (for comparison, think about the birds of the Tiki Room compared to The Carousel of Progress family). Because of this, the project experienced serious delays. Its projected 1958 opening came and went with no progress past some amazing ideas. At this point, GE’s willingness to finance the ambitious endeavor seemed to be waning.

Then in 1960, General Electric had much bigger problems to manage. The company and many of its top executives were indicted in a price fixing antitrust scandal. Several of its executives were jailed and a few others fled the country. In the end the company was fined more than half a million dollars. Adjusting for inflation, that would be roughly 5 million dollars today. This was the nail in the coffin for the partnership with Disney. After news of the scandal broke, Walt wanted to distance his company from General Electric. With the hefty fines GE incurred, they could scarcely afford the partnership anyway.

With the project put on hold indefinitely, it seemed as if the Watt family’s nostalgic exploration into the wonders of electricity would never see the light of day. However, it wouldn’t be long before the project was revived and revised. In fact, the innovative concept would have new life just 4 short years later.

Carousel of Progress Comes to Life

The 1964 New York World’s Fair is an event that many Disney fans know well: it brought us several beloved Disneyland attractions (two of which would later come to Walt Disney World). It’s here that the Watt family found new life – sort of.

Eager to raise public opinion after their antitrust scandal, GE set out to create a family friendly attraction for their pavilion  It needed to be a show-stopper so they knew there was only one man for the job: Walt Disney. Executives approached Disney to design something spectacular and gave almost full creative control to him and he once again pitched the idea of an electrical progress show and executives loved it. Imagineers got right to work. Though the limited Audio-Animatronic capabilities were still an issue, Disney’s best and brightest minds pooled to their talents and the technology quickly advanced.  Fun fact: this World’s Fair is credited with the debut of the Audio-Animatronic we’ve all come to know and love. 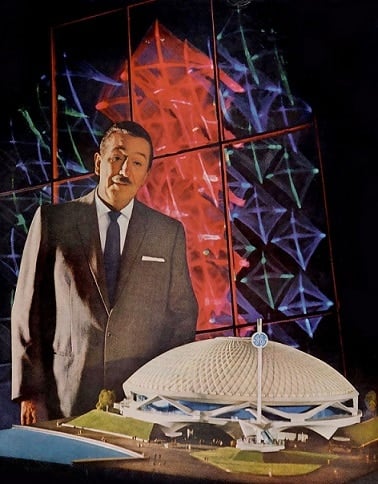 This time, rather than a walk-through experience, imagineers Robert E. Broggie and Bob Gurr designed a theater that would actually rotate around the stage. Wilber K Watt was renamed to John.  The shows star was originally voiced by singing cowboy Rex Sheppard and later by actor Jean Sheppard. The rest is, as they say, history!

The General Electric Carousel of Progress was one of the most popular attractions at the 1964 World’s Fair. Even with a capacity for 250 people every 4 minutes, the attraction still regularly saw lines of an hour or more. After the Fair closed in 1965, the attraction was moved to Disneyland where the show ran from 1967-1973. Once the final curtain fell on the Disneyland version, it was moved to Walt Disney World where John and his family live on to this day. 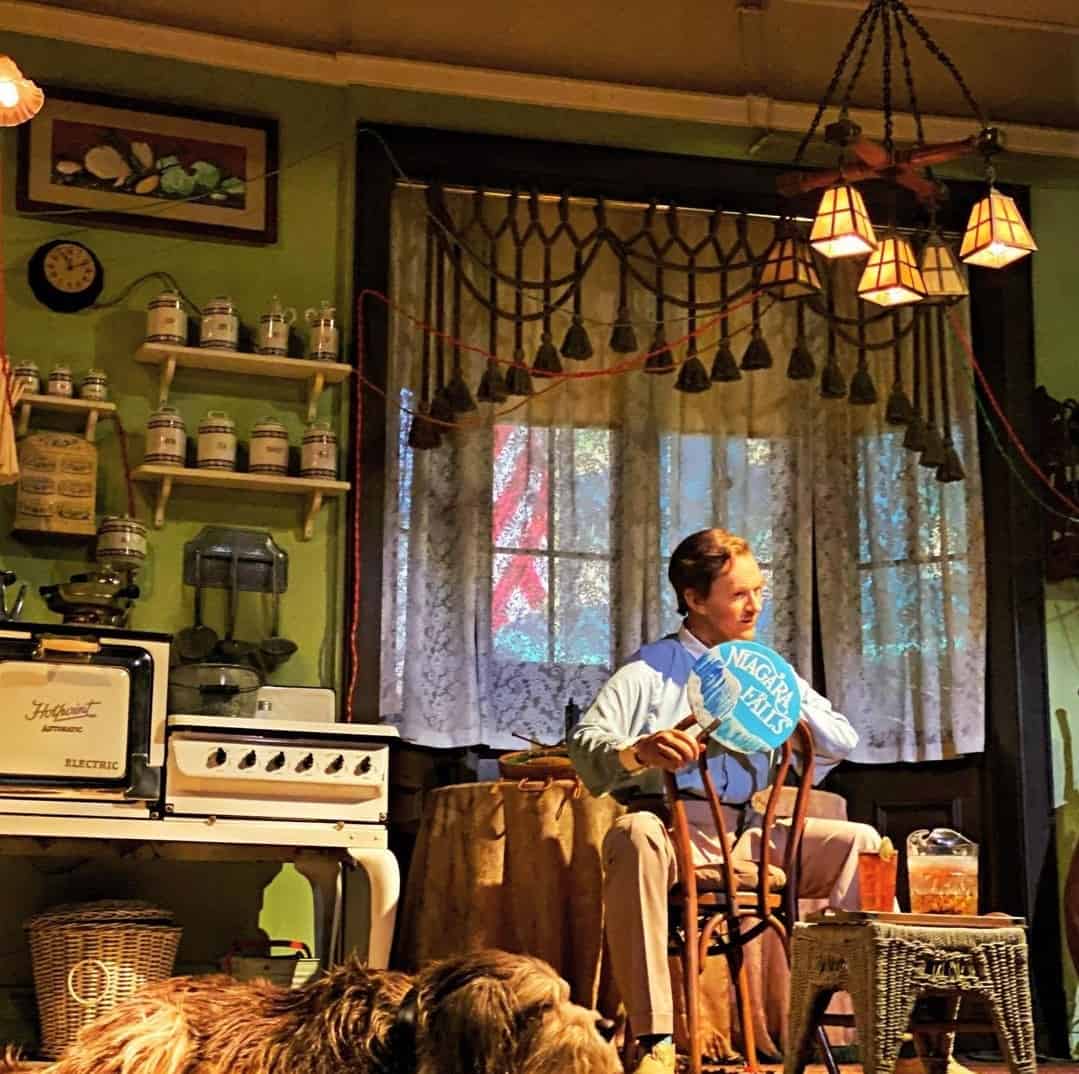 Do you love this classic attraction as much as I do? Our family has such an attachment to the ride that my 7 year old frequently quotes it.  Recently he asked if I wanted a “sasparilla” only to quickly say “oh I’m sorry, we’re calling it root beer now. That’s progress for ya”! It’s safe to say Walt Disney’s Carousel of Progress has certainly made an impression. Let us know what your thoughts on this classic show in the comments!