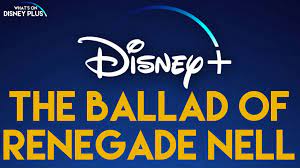 “The Ballad of Renegade Nell” Coming Soon To Disney+

Disney has announced a push for scripted UK originals for Disney+ and “The Ballad of Renegade Nell” is one of these originals in the works.

Set in the 18th century, this series follows Nell Jackson as she is framed for murder and is forced into a life of highway robbery, along with her two orphaned sisters Roxanne and George. Jackson if aided throughout the story by a little spirit called Billy Blind.

“I can’t wait to bring swashbuckling highwaywoman Nell Jackson to the screen. Nell’s a ball of irreverent, blustering energy, fighting against the privileged gatekeepers of English society in 1705, battling to contain mysterious forces within her and her enemies as she goes on the run with her two sisters. It’s a thrill once again to work with Faith Penhale and the super-talented team at Lookout Point. I’m so excited to partner with Disney+ for this series, with their supportive approach and magnificent commitment to bringing this three-hundred-year-old story to the biggest possible global audience.”

The release of this show comes after the announcement focused on UK’s first unscripted series Save Our Squad and Disney’s goal to have 50 productions in Europe by 2024.

The goal is to to have material that appeals to both audiences in the USA but also in the UK.