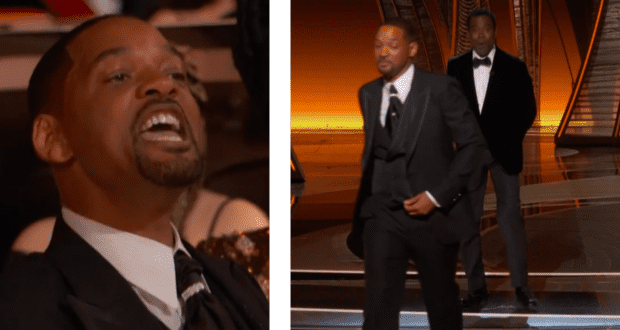 We do “not condone violence of any form”: Academy launches investigation into Will Smith’s attack of Chris Rock during the Oscars

The Academy of Motion Pictures Arts and Sciences released a statement on Monday, saying it condemns Will Smith’s actions during the 94th Academy Awards show on Sunday night at the Dolby Theatre in Los Angeles. The Academy also said it is launching a formal review into the incident.

On Sunday evening, Disney-owned ABC aired the 94th Academy Awards live, but no one could have predicted the display that took place between comedian Chris Rock and actor Will Smith.

Comedian Chris Rock stood up to present the award for Best Documentary, but before he got to the nominees, Rock saw Will Smith and his wife Jada Pinkett Smith seated in the front row and commented about Pinkett Smith’s shaved head.“Jada, I love you,” Chris Rock began, “‘GI Jane 2,’ can’t wait to see it, all right?”

The camera was on Will Smith and Jada Pinkett Smith after Rock’s comments; she was rolling her eyes, and he was smiling. But within seconds, Will Smith took to the stage and approached Chris Rock. Suddenly, he reached out and slapped Chris Rock across the face and then returned to his seat in the front row.

Once Smith returned to his seat, he yelled back to Chris Rock, who responded, saying he was only making a GI Jane joke, to which Smith responded with the same words he had just yelled to Rock, but this time, they were heard ’round the world:

“Keep my wife’s name out of your (expletive) mouth!” Smith shouted to Chris Rock, who was visibly shaken by the exchange and confused by what had transpired.

“The Academy condemns the actions of Mr. Smith at last night’s show,” the film academy said in a statement. “We have officially started a formal review around the incident and will explore further action and consequences in accordance with our bylaws, standards of conduct, and California law.”

In a tweet on Monday, the Academy said it “does not condone violence of any form.”

The Academy does not condone violence of any form.

Tonight we are delighted to celebrate our 94th Academy Awards winners, who deserve this moment of recognition from their peers and movie lovers around the world.

It remains to be seen what consequences, if any, will be handed down to Will Smith for his actions. The Academy says it will conduct a review of the incident and then determine its further actions based on the film academy’s bylaws.

2022-03-28
+Becky Burkett
Previous: Disney Star Was Almost Escorted From Oscars After Assaulting Presenter
Next: ‘The Full Monty’ Series In the Works at Disney+, Original Cast Set to Return