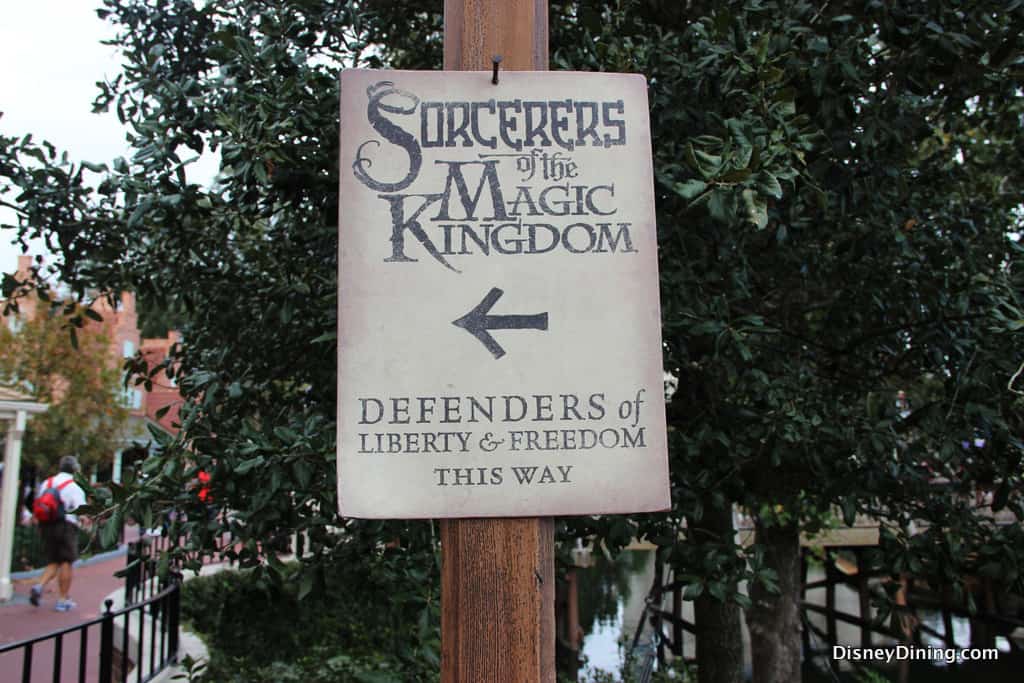 Sorcerer’s of the Magic Kingdom Game

Sorcerer’s of the Magic Kingdom Game

How about an adventure in Magic Kingdom that has you defeating classic Disney villains? It is possible when you play the interactive game Sorcerer’s of the Magic Kingdom.  Although the game opened to the public on February 22, 2012, there are still many people who know nothing about it.  It doesn’t take long to find out as the gamers in the Magic Kingdom are very eager to share information on the game with those standing nearby who watch in amazement to a scene unfolding before them.  There are 107 acres in the Magic Kingdom, and because it changes so much there is always something new to see.  Playing an interactive role-playing game can be an exciting new way to experience the Magic Kingdom. You can even continue the adventure when you get back home. I will explain this later in the article.

When you enter Magic Kingdom, look to your left, just past the Town Hall you will see a small Fire House.  This serves as enlistment headquarters for the Sorcerer’s of the Magic Kingdom game. A second location is in Liberty Square behind the Christmas Shop.  You will enter a queue area that shows a portal with Merlin giving a short explanation of the game.  Next you will be called up to a desk where a Cast Member asks for your admission ticket which is then inserted into a computer.  The Cast Member will issue you a new packet of playing cards. If you have played the game before, the Cast Member will remind you where your adventure ended and you will need to play the game today before you can get your new set of cards.  If you have not played the game before you will be taken to the side where you will receive personal instruction on how you/your group can play the game.  Each Guest can register to play a personal game, or one person in the party can register for the whole group to play one game.  Each day, every guest registered can receive a new packet of 5 playing cards.  There is no extra charge for this game; it is covered with your admission ticket.  The game does not operate during Extra Magic Hours and it closes one hour prior to park closing each night.  It is open during special hard ticket events such as Mickey’s Not So Scary Halloween Party and Mickey’s Very Merry Christmas Party.  During these special parties you can receive your regular packet of new cards for that day, and extra Special Cards made for that specific event. Open your packet of cards and take a look at what you have received. These cards are truly works of Disney art.  The card will show a Disney character, name the type of spell card it is and what type of weapon is used by the character(s) on the card.  A power number is given for the attack, the boost, and the shield elements of the game. For instance, on Eeyore’s Gloomy Cloud card we see that he has a Toy Spell, with a Wishful Attack of 2, a Wishful Boost of 1 and a Wishful Shield of 3. His card is number 27/70, the background color is red, which is true of all the Toy Spell cards making it easier to categorize them quickly, and at the bottom is a phrase: “Oh bother. This disturbs me greatly. At least we’ve not had earthquakes today.”  There is also a quarter moon sphere and castle turret at the bottom left corner of the card near the number, and a ©Disney on bottom right corner. Keep reading for more about these details.

Are you ready to begin your Magic Kingdom adventure battling the Disney Villains? Ok, armed with a new packet of cards, a key card, and a map you look for the symbol on the map in the area of the park in which the Cast Member tells you to start your adventure that day.  You may have been given a starting point on Main Street.  You approach the location you see on your map and the antique brass disc, emblazoned with the symbol for the game is before you on the ground.  This confirms you are in a spot to play the game and you confidently step onto it.  You will see a keyhole in front of you.  Simply touch the Key Card to the keyhole and a portal will open in front of you. Listen to the problem being displayed in the portal in front of you and select the type of card you want to play to defeat the villain here.  In the beginning stages of the game it is not ultra important which card you choose. The characters on the screen will do their best to help you win this battle.  You may need to play more than one card at a time.  Stay on the disc on the ground and aim your cards out in front of you toward the portal.  If you successfully defeated the villain you will be congratulated and told where to go next.  If you did not defeat the villain, you will be given another location to go to and try and defeat them for good.  Although the game is played throughout Magic Kingdom, the defeating of each villain is contained within one area of the park, and then you move onto another area to fight the next series of battles.  So you will need to defeat the Villain on Main Street before heading to the next battle series in Fantasyland, or Adventureland, Liberty Square or Fronteirland.  As you defeat more Villains you are elevated to higher game levels.  If you happen to go to the wrong portal, the character on the screen will tell you where you are to go to continue the game.  The game can be played at your leisure and on multiple days. Play in each area of the park should take between 20 and 25 minutes. It will take between three and four hours to play the whole game. This makes a great option for families who come to the Magic Kingdom often.  Each time you head back to play the game you need to go to the last portal you were directed to.  If you don’t remember where you are supposed to play next, find any portal, touch your key card to the key hole and it will tell you where you are supposed to be.  When you come back to the park on each day, play one of the portals before going to either the Firehouse or Liberty Square Enlistment quarters prior to picking up your new packet of cards for that day.

Disney added some new elements in October 2013 to make the upper levels of the game even more challenging.  The player who plays the game often will reach a “hard” level where the weaknesses of the Villains will change thus making the play different.  To find out the Villain’s weakness, cast several different types of spells against them and watch to see which one is successful. Power levels of those spells should be taken into account as well.

There is no additional charge for the cards picked up each day at the Enlistment quarters.  There are some additional card sets you can purchase that have unique cards and a super-rare spell card not available anywhere else.  These are sold in packs of seven cards, but they hold even more than these seven cards.  This packet can introduce you to the home game version of Sorcerer’s of the Magic Kingdom.  It comes with special character tokens, special coins, a Key Card, one of four Gameboards (random in the packages), a special map, a visual checklist of all the original 70 cards and instructions on how to play with all of your cards at home.  So each time you pick up a free packet of cards you are adding to your Magic Kingdom version of the game, but also to your home play of the game.  You will find additional merchandise in the Emporium and some at the Art of Disney Store, both on Main Street U.S.A., Magic Kingdom.  There are t-shirts that hold special spell powers, notebooks with a convenient carrying strap that hold your cards in protective sleeves.  Some will hold up a whole page of cards from their notebooks when battling the Villains, which help them to defeat the Villain more quickly.  It took Disney Imagineers over four years to create and perfect the Sorcerers of the Magic Kingdom and they hit a home run.  This game is played daily by families and individuals showing its appeal to guests of all ages.  When you get additional cards you can trade them with other players or attend a Disney official Pin Trading night where they are gaining in popularity for trading. Cards 61 through 70 are extremely rare so if you get one of those, hold onto it.  Card #61 Ariel’s Bubble Attack, Card #62 Dumbo Pink Elephant Parade, Card #63 Finn McMissile Missile Salvo, #64 Hercules Tower Topple, #65 Jasmine Magic Carpet Tassels of Fury, #66 Mama Odie Magic Charm, #67 Merryweather Stone Spell, #68 Mr. Incredible Power Heave, #69 Mushu Fiery Breath, and #70 Winnie the Pooh Honeybees. The Special cards for the Halloween Party, 2012 was Chip and Dale Bag of Tricks, 2013 Ghosts Haunted Mansion Happy Haunting Grounds; Christmas Party 2012 Elves Wayne and Lanny’s Ornament Barrage, 2013 Nephews Huey, Dewey and Louie’s Snowfort Barricade.  Some CM’s were given a special card: Cast Members Power of the Four Keys card.

Click here for a PDF ecplanation of the card design: Sorcerers of the Magic Kingdom card design 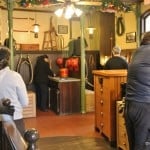 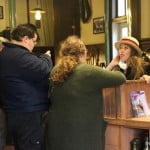 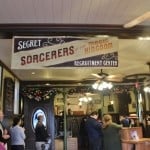 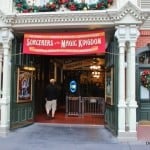 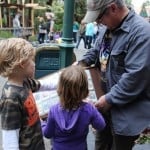 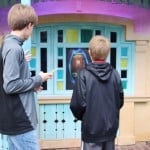 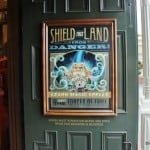 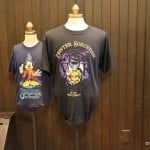 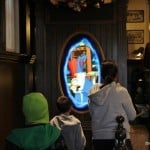 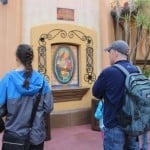 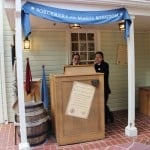 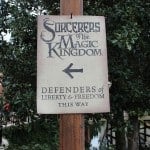 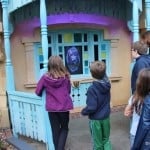