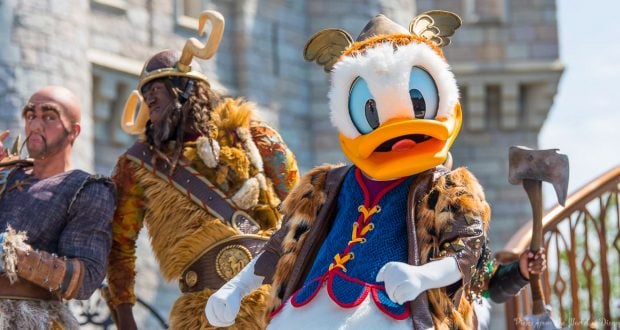 Sure, Walt Disney World could be totally overwhelming if you are planning your first trip. For many adults, it is hard for them to understand a colleague’s enthusiasm for yet another vacation to the House of Mouse so they ask why are you going again under the mistaken belief that Walt Disney World is too expensive or only for children. Which is why, in defense of Walt Disney World, I would like to clear up a few of the most common misconceptions people associate with a Walt Disney World vacation.

6. Walt Disney World is Only for Kids!

To the uniformed, Walt Disney World is a place you take your kids once a childhood. Sort of like crossing it off a kid’s bucket list. However, the thought that Walt Disney World is only for kids could not be further from the truth! Walt Disney World caters to the young and the young at heart so no one is left out. Sure, there are kiddie rides and princesses all about. But, there is also world-renowned dining, golfing, spas, and the opportunity to enjoy adult beverages nearly everywhere you turn. Additionally, the memories you make as an adult at Walt Disney World will be with you throughout your whole life, no matter whether it is seeing your child’s eyes light up at their first sight of Cinderella Castle, or standing next to your spouse as you watch fireworks for the umpteenth time while remembering the feeling as you watched it after just getting engaged.

5. Why Are You Going for So Long, You Only Need One Day Per Park!

In order to make the most of your Walt Disney World vacation, you should plan on spending at least two days in each park. One day per park is simply not enough time to experience most of the main attractions, let alone most or all of the lesser known, but usually much more magical, attractions. Additionally, one day per park would not give families the time they need to enjoy the first-rate entertainment and shows that Walt Disney World parks offer. By spreading your park visits over two days, you give yourself and your family the time to really enjoy the parks, and allow you to take in the magical atmosphere created by the Walt Disney World Imagineers. Of course this isn’t possible for everyone- but in an ideal world this the best way to go!

No matter how you spin it, you must plan a Walt Disney World vacation to a certain extent. Seasoned veterans will tell you that they book their advanced dining reservations 180 days in advance and their Fast Pass + reservations 60 days or 30 days in advance depending on their hotel accommodations. If you fail to plan at least some of your vacation you will likely be left out in the cold, or stifling, hot Florida sun, from the most popular restaurants and attractions. Some Walt Disney World visitors swear by planning an extremely detailed itinerary and sticking to it. Others will create a general idea of which parks to visit on which day, keeping in mind the availability of extra magic hours if they are property guests, and plan their Fast Pass + and dining reservations accordingly while allowing some time for relaxation and spontaneity. No matter the style, it is imperative you at least form some sort of plan, or you might find yourself being quite unhappy in the happiest place on earth.

3. Epcot is So Boring

Time and time again, people accuse Epcot of being boring and not worth the money. Some families make the mistake of excluding this park from their entire visit to Walt Disney World. The truth is Epcot is one of the most amazing theme parks on the planet. Epcot is the central hub of Walt Disney’s “Florida Project” and was to be a prototype of a future community. While the technology has not led to people taking up residence in Epcot as Walt had imagined, this is a park filled with innovative exhibits and rides showing visitors how the world around them works. In addition to the chance to learn about the land, the seas, space, and more, visitors may also learn about the cultures of 11 countries as they tour the pavilions of the World Showcase. These pavilions offer guests the opportunity to take in the sights, sounds, and tastes of life in such countries as the Italy, Morocco, or Japan, to name a few. There is so much to see and do at Epcot, there’s no way you could be bored!

2. A Walt Disney World Vacation is Too Expensive

True, a vacation to Walt Disney Would can be pricey, but some of those details are up to your control! Walt Disney World frequently offers discounts and specials, including hotel discounts and opportunities to dine for “free”! What’s so great about that is that most of the specials are offered during what is considered the low travel season for the parks, which is great since the parks are less crowded. Additionally, for those who want to stay on property, Walt Disney World has a tiered system for their hotels, including a value tier that is quite affordable and with accommodations that are just as nice as the fancier hotels. So, if you are willing to go at a time that is not the middle of summer, and stay at a “value” resort, you’re sure to have an amazing Walt Disney World Vacation that won’t break the bank.

1. How Can You Eat Theme Park Food for a Whole Week?

Yes, while it is true that you generally eat “theme park” food for the entirety of your Walt Disney World vacation, it can only be considered that because it is literally served to you from within a theme park. But, the food offerings at all of the Walt Disney World theme parks are a far cry from an overpriced, tiny hamburger or cold French fries you are likely to find at your typical theme park. Instead, the food at Walt Disney World theme parks is inventive, unusual, and delicious! Yes, you can get a typical burger and fries, but you can also get a falafel, tacos, salads, or gourmet pizza. The parks, and the surrounding resorts, also all have amazing restaurants that can take you on a culinary tour of Canada, France, Mexico and anywhere in between, as well as world-renowned steakhouses, California-centric cuisine, and dinner shows!