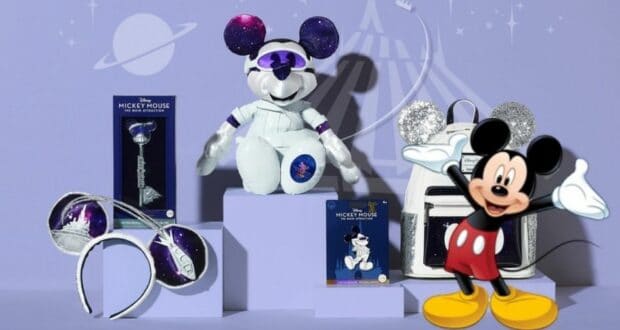 Calling all Disney collectors! We previously shared the news that Mickey is getting his very own merchandise for 2022. That’s right, remember the popular Minnie Mouse: The Main Attraction merchandise series? Well, now Mickey is getting in on the action. Disney has revealed the FIRST LOOK at the 1st release in the new series!

Now, with the first look image of series one for Mickey Mouse: The Main Attraction… we know the beloved Space Mountain will be number one, just like the Minnie Mouse series.

Confirming this, you’ll see now see on the shopDisney website the first image in the series as shown below with, “Get Ready to Blast Off: Coming soon! Mickey takes the fun out of this world with the first series inspired by Space Mountain.”

Furthermore, the website goes on to show the 12 part series images, matching the series Minnie Mouse: The Main Attraction took as shown in the screenshot below:

Each series of the Minnie Mouse series included a plush, bag, pin set, ear headband, mug, and MagicBand. shopDisney now notes that “Each series features a different Disney Parks attraction and includes a plush, ear headband, bag, jumbo pin, and key. Collect them all!” This means the MagicBand option is gone and instead has been replaced with a key.

So, when is this highly anticipated merchandise set to release? While shopDisney has yet to note a date, we did see @shopdisneyuk post to Instagram, “Celebrate everyone’s favorite pal, Mickey Mouse in 2022’s limited release, collectible series- Mickey Mouse The Main Attraction. The first in the series will release at 8 am, Friday 28th January with future releases planned for the last Friday of every month. #WDW50”

RELATED: Check Out This Delightful Festival of the Arts Merchandise

What do you think? Can we expect a January 28th release here in the states as well? We’ll keep you posted as we keep a watch on shopDisney for more details.

Do you plan to join in on the Mickey Mouse: The Main Attraction merchandise frenzy? Let us know in the comments!

2022-01-23
Jamie Sylvester
Previous: Eat This – Not That in Walt Disney World
Next: Enough of the Disney remakes already! Walt didn’t want them either, and we have the proof!