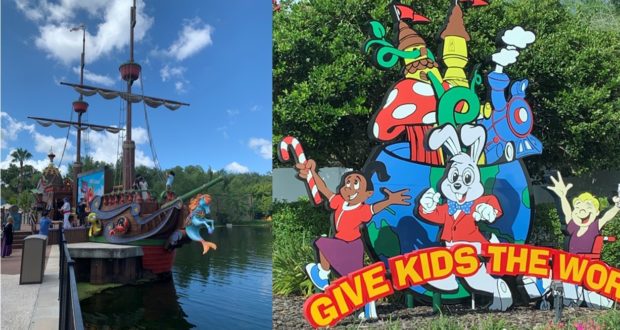 Serendipity Dedication at Give Kids the World Village

Give Kids the World Village is an 89 acre complex that is located just miles from Walt Disney World. On the surface, it looks like a whimsical, themed resort. There is much more to GKTW than that. Since 1989, Give Kids the World has offered over 176,000 Wish families a chance to have the vacation of a lifetime.

On July 22 I was invited to the dedication of Serendipity. That’s the brand new pirate ship attraction that is in the pool area. It is over 90 feet long and ADA accessible. The new ship features photo opportunities, an animated parrot, and a 16 x 9 SNA Displays LED screen. There is a stage in front of the screen, making Serendipity perfect for movies under the stars, watching sports, and parties that feature pirates, mermaids, and princesses.

The project was made possible through a $1.5 million donation from the Don and Lorraine Freeburg Foundation. Serendipity is built to stand the test of time and Florida weather. The frame and cladding are aluminum. That was covered with Poly Gem to make it appear to be wood. It was built off site, and then it took two days to install on property. The results are a lot of fun.

Some of the parts of Serendipity are named after children who had visited in the past. The turtle is named Vinney, the crab Tristan, and the seahorse Cambri. We learned a bit about each of these precious souls. The splashpad has also been renamed. It’s now called Jack’s Wacky Water Works, after a boy named Jack whose favorite part of his trip was splashing in the water. The mothers of three of the children were there, and the fourth was represented by a family friend.

While there were sad moments thinking of the children who have passed, the dedication ceremony was filled with laughter and music. There was a live band, and there were pirates and mermaids on hand. There was love and hope in the air.

This was my first visit to Give Kids the World Village, but I hope to be able to share more with you in the future. It is an incredible organization. Children and their families receive an all expense paid week long vacation. It includes transportation, accommodations, meals, snacks, donated theme park tickets, entertainment, daily gifts, and more. The complex itself has different themes throughout. They include The Castle of Miracles, Julie’s Safari Theater, The Gingerbread House, and the largest game of Candy Land in the world. There is more to Give Kids the World Village than just a free vacation. Children who have been battling a serious illness have a chance to be a kid once again. It also allows the families an opportunity to relax and have a good time, making memories that will last a lifetime. There are 166 villas, so the families and children are surrounded by others in similar circumstances and people who understand what they are going through.

I’d like to thank the staff at Give Kids the World for inviting me to share in the dedication of the Serendipity Pirate Attraction. I witnessed a lot of love and compassion. Thank you as well for providing a happy place to so many children. Kids and their families have visited from all 50 states and 76 countries. If you’d like to learn more about this incredible organization, visit gktw.org.