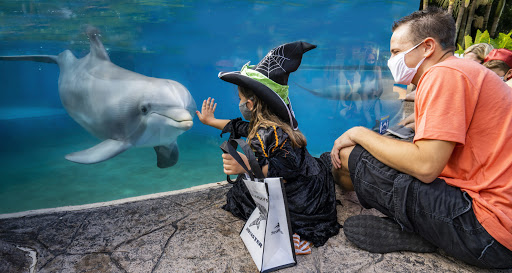 For years SeaWorld Orlando has offered another not-so-scary event for the Halloween season. It’s known as SeaWorld Spooktacular. It is not nearly as grand as Mickey’s Not-So-Scary Halloween Party, but it’s still a lot of fun for the little ones. As a SeaWorld Annual Passholder, I decided to visit on September 19, which was the first day. I’ve been many times over the years, and I wanted to see how things would be handled in the age of COVID-19.

SeaWorld Orlando requires reservations, and I was able to get one a few days out. I have been back to SeaWorld a few times since they reopened, and getting a reservation has never been a problem. There was a sign on the street outside of the entrance, reminding people that face coverings are required. The electronic sign said that reservations are also required, and they were still available for the day.

Parking at SeaWorld Orlando is hit or miss. If there is an event going on it can take a while to get into the parking lot, even with the lower capacity. This was no exception but I expected it. The way that the cars come in from the road tends to cause backups. The team members were doing the best that they could to get cars into the parking lot as fast as possible.

With the pass that I have I receive Preferred Parking. At SeaWorld Orlando it isn’t really all that necessary, because it’s all part of one parking lot. You save a few steps with Preferred, but it isn’t worth the extra money that most people have to pay for it. A team member directed me to the back of the parking lot, and I followed the line of cars until I got to the Preferred section. The problem was that in order to park I had to drive the wrong way down the row. All of the rows in the SeaWorld parking lot go in one direction, so everyone directed that way had to do the same thing. It didn’t feel safe.

I’ll start with the downside of the day. After I parked it was time to get in line for Temperature Check. This was the longest line that I’ve waited in since any of the theme parks reopened. It wound along the length of the front of the park twice, and then some. People were social distancing to some extent, but it wasn’t perfect. Masks were another story. In a span of 60 seconds I counted 20 people who either had them on their chins or weren’t wearing them at all. That wasn’t the only problem with this line. Twice people tried to cut in front of me. When I said no they tried to get behind me. Fortunately, the woman behind me was not about to let that happen, but she was still polite about it. There were no team members watching the line or trying to get people to follow the rules. SeaWorld laid off a lot of people when the park closed, and it did not feel like they were prepared for the crowd at the front of the park.

It took over 35 minutes to get to the Temperature Check tent. I like the way that they now do this at SeaWorld. You just walk through. If a scan registers too high, they will take the person’s temperature with a forehead thermometer. I have a feeling that a lot of people did register high. We waited in the sun for over half an hour to get in there, and it was a hot day.

Things improved quickly once I was inside the park. SeaWorld was busy, but it was still easy to stay away from others. This weekend was also the last weekend of the Craft Beer Festival, so there were two special events taking place.

SeaWorld Spooktacular itself was handled very well. There is a decent amount that you can do. You can have breakfast with The Count, or decorate cookies with Cookie Monster. Both cost extra, and reservations are required. There is a DJ in one area. There are special characters with either a sea or Halloween theme, but none of them are scary. There is a pumpkin patch maze, as well as a pumpkin-fish patch. There are Halloween themed carnival games, and special food and merchandise to celebrate the season.

While this is all fun, the main draw for SeaWorld’s Spooktacular is the Trick or Treat Trail. This was handled very well. In past years, I’ve seen long lines for the candy, and team members would be very close to the children to give it to them. The way that it is running this year is brilliant. At each station there is a team member behind plexiglass. He or she will drop the candy down a chute, right into the child’s bag. The kids seemed to love this, and everyone was able to stay at a safe distance. The lines were short for the candy, the kids were able to get right through. One drawback of the Trick or Treat Trail this year was that each child needs to purchase a bag from SeaWorld to participate. The bags were cute, and only cost $2.49 each, but I saw at least one parent who was not happy about shelling out more money.

When I left they were still sending people the wrong way down one-way rows to park. It caused a lot of confusion, because I was not the only car leaving and going in the correct direction. This was not a good idea.

Overall, SeaWorld did a great job with this year’s Spooktacular. The kids were able to trick or treat safely, and there were some really fun character opportunities. Most of these were at a safe distance. Children 12 and under are encouraged to wear costumes. The best part of all is that it is included with your theme park admission.

SeaWorld Spooktacular runs on Saturdays and Sundays, now through November 1. The hours are 11:00-7:00, although those are not the park hours. SeaWorld often has ticket deals online, so this could be an affordable way to celebrate the Halloween season. I recommend that you arrive early and pack your patience, because getting into the park was frustrating.