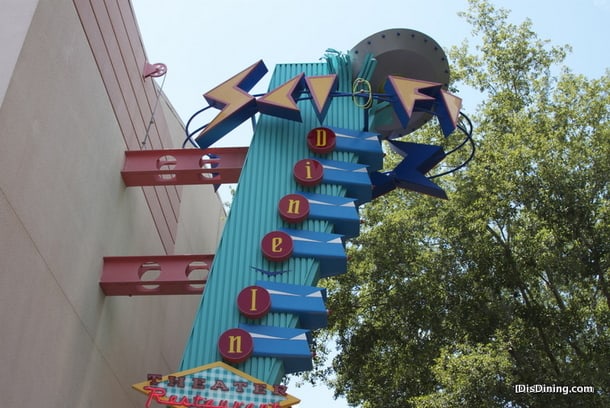 My husband, daughter and I visited on a Saturday night, close to closing. Even though the reservation had been difficult to get the restaurant was not overly crowded, most likely because of the time. We were a few minutes late for our 8:00 reservation but Joe, who was the host (I believe he referred to himself as our “parking attendant”) assured us that it wasn’t a problem. We waited five minutes tops before Joe “led us back to the 1950’s” and we saw the restaurant for the first time.

The atmosphere immediately made me forget that there was only a five minute wait for Star Tours. The theme is a 1950’s drive-in theater, the cars are the tables. Most of the cars have three rows for two people each. In the front of the room there is a giant movie screen that plays film trailers from such pictures as “Attack of the 50 Foot Woman”. Old intermission clips also run, giving it a feel of a drive-in. The restaurant is dark and I did hear a cast member ask someone to not use the flash because it would disturb other movie goers.

Our waiter, or “car hop”, was Marcus and he was excellent. He was attentive without being intrusive and was more than happy to answer any questions. He always had a smile on his face and seemed to love playing the part.

We started off with milkshakes, which is something that the Sci-Fi Dine-In Theater is known for. I ordered strawberry, my husband vanilla and our daughter chose the Oreo Cookie Ice Cream milkshake. All were quite tasty but our daughter definitely made the best choice. (She said that it was better than Steak ‘n’ Shake.) They were thick and creamy with a lot of flavor. Marcus also brought us water without our asking.

My family and I are vegetarian. My husband will eat seafood but our daughter and I are ovo-lacto, meaning that we do include eggs and dairy in our diets but not meat of any type. There were two options on the menu that we could choose from without any modifications. One was a veggie burger and the other was the Whole-Grain Pasta. We decided on that and asked Marcus if we could share the entrée. He smiled and told us that it was not a problem. My husband decided on the Shrimp Pasta.

My husband was pleased with his choice. It contained six large shrimp and was accompanied by bowtie pasta. Fresh tomatoes, basil and garlic added flavor. He said that if we were to return that he would most likely order it again.

Our daughter and I did not fare quite as well with our selection. The entrée was divided into two portions and brought on separate dishes, which was appreciated. (We have been splitting entrées for years and many places will bring out the food and an empty plate and we need to divide it ourselves, which can get a bit messy.) The pasta itself did not have a whole lot of flavor. On top were seasonal vegetables, ours included zucchini, tomatoes, onions and peppers. The problem was with the tomato broth. It was way too spicy for either of our tastes and since it had not been marked as such on the menu neither of us had been expecting it. We agreed that next time we will play it safe and go with the veggie burger. Both entrées came with cups of fresh parmesan cheese, which was a nice touch. Even though we only ordered two dishes Marcus still brought us three cups of cheese.

Since we had ordered milkshakes we decided to skip dessert. There were several choices, including Red Velvet Cheesecake and, of course, a Hot Fudge Sundae. After all, this was a trip back in time to the 1950’s.

F-Food- Mediocre at best, especially for the prices. It’s not the best food that I’ve had at Disney. The milkshakes, on the other hand, were excellent.

A-Atmosphere- Incredible. This is Disney at it’s best. It is a fun place for the whole family or a different type of dinner for two. Keep in mind that it is fairly dark in the actual restaurant. I needed to use the flashlight on my cell phone to read the menu.

S-Service- Again, incredible. Not only was Marcus excellent at his job, the other people working there were also having fun. At one point right before we left I was getting ready to take a picture of the screen. Another car hop told me about something that was about to come on that was picture worthy and he was right. From the moment that Joe greeted us to when Kelli told us to have a great night as we left we were impressed with the staff.

T-Tips- Make a late reservation, the crowds die down quickly. Go for the atmosphere, not the food. I have wanted to visit there for years and I had a wonderful time, even though the food was disappointing for two of the three of us. This is a place where the experience is the most important part.