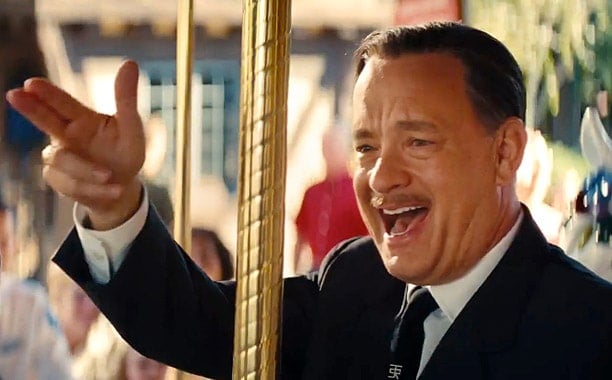 I have been looking forward to this movie for months, counting down the days like some people do to a Harry Potter or Twilight release.  As a Disney fan I knew going in to it that I would love it, but I didn’t anticipate exactly what this movie ended up being.  As a child I remember seeing three movies in a movie theater:  E.T., Annie, and a re-release of Mary Poppins.  I was a big fraidy-cat, and E.T. had me terrified each night that there was an alien hiding in my stuffed animals.  I had the Annie album and sang along with my Fisher Price record player while trying to recreate the dance numbers.  But Mary Poppins . . .it was magical.  Of course, I sang along with that album too, and replayed the story over and over in my head.  As an adult and Disney fanatic I’ve read Walt Disney biographies that deal with his struggle to get the rights for Mary Poppins from P.L. Travers, and this is what I anticipated going in to Saving Mr. Banks.

But what I got was so much more.

Saving Mr. Banks masterfully blends the story of Helen Goff (P.L. Travers) and the struggles of her life with the struggle of the Disney Studios to create a motion picture that would convince her to sign over the rights to her beloved character.  The movie is beautifully set in both 1960s Los Angeles and 1900s Australia.  The scenes at the Disney Studios and Disneyland are sure to thrill any Disney fan, but the attention to detail in both settings including costumes, architecture and props will please any period film aficionado.

Through flashbacks to her childhood during the process of turning her books into a screenplay, Mrs. Travers relives the pain of her childhood in Australia.  Her father, a heavy drinker and ne’er-do-well in his bank career, doted on Travers—they had a very close relationship.  Young Travers had to deal with her father’s drinking, an illness that in the movie appears to come from a drunken fall from a stage but in real life was influenza, and a mother who attempted suicide under the stress of her husband’s problems.  All the while young Travers used her imagination to escape.  The casting of the family in turn of the 20th century Australia was well done, and the story was very compelling and emotional.  The one element of the Australia sequences that surprised me was that the aunt who came to “fix everything” and was one of the inspirations for Mary Poppins really did not play a large role in the movie.

When Travers’ childhood story is juxtaposed with her visit to Los Angeles it becomes even more compelling.  The seamless transitions show Travers overcoming and working beyond her troubled childhood through her time with Walt and the movie team (Richard & Robert Sherman and Don DaGradi).  According to the movie, the father character in Mary Poppins, Mr. Banks, was completely based on Mrs. Travers father, Travers Goff.  Mrs. Travers feels particularly compelled to protect this character in fiction as she was unable to do in life.  Her father passed away from influenza when she was 7, and she blamed herself in some regards.  The scenes in Disneyland with Travers riding the carousel with Walt, and later in the studio when the Sherman Brothers music moved her to dancing, show that she was able to find joy in her heart.  After Mrs. Travers loses her temper over the inclusion of animation in the film, Walt visits her in London and empathizes with her over his own difficult childhood and experiences with his father, and convinces her to sign over the rights.  Later we see her in London in much more casual and colorful attire taking a lighter outlook on life.  Even her appearance at the Los Angeles premier of the movie shows that the sad memories of her childhood no longer control her life.  She was able to let go of her guilt over the death of her father when she was a young girl.  Unfortunately, this part of the movie is not quite the way things truly happened in the process of making the movie.  In fact, once it was all said and done Travers was very unhappy with the way her characters were treated, and cried at the premier because of that.  She was indeed a very hard woman to work with (just stay for the credits for audio proof), and the fact that some of the things that she adamantly opposed that ended up in the final version (like animation) made her furious.  But, the movie is true to the fact that the only reason Travers considered giving Disney the rights to Mary Poppins is that she was in a financial bind.  The royalties made her a multi-millionaire.

The two main characters of the movie, P. L. Travers and Walt Disney, needed to be well cast to make this film work.  The two play off of each other as adversaries in the process of winning the rights to a film version of the books.  Mrs. Travers aloof and disagreeable nature coupled with Walt’s frustration over his 20 year pursuit of the rights makes them adversaries in the beginning, but in that heartwarming scene in London they realize that they really aren’t that different from each other (despite the earlier comments that each makes about the other).  Emma Thompson depicts P.L. Travers brilliantly.  Her many Best Actress nominations thus far prove that for this role she was “practically perfect in every way.”  Tom Hanks as Walt Disney, however, brought about doubts for me.  Don’t get me wrong, I’ve been a Tom Hanks fan since his Bosom Buddies days and I think he is an inspired actor—one of the greats.  But anytime you portray a famous person you run the risk of missing the mark.  Even someone historical like George Washington who wasn’t on television weekly like Walt, letting all of America get to know his voice, mannerisms and appearance, is tough to impress me with accuracy.  Walt Disney would be a hard character—every aspect needed to be right to make it convincing.  Plus, I thought every time Walt speaks I’m going to hear Woody.  But, I am very happy to admit I was wrong.  Very wrong.  Hanks does an excellent job as Walt.  It was not his job to be a leading actor in this movie, but as a supporting actor strengthening the performance and journey of the P.L. Travers character he is right on.

A real scene stealer, in my opinion was the character of Mrs. Travers driver, Ralph.  Although he is a combination of several drivers she had, he is a charming character who makes a heartwarming connection with Mrs. Travers.  And he creates some comical moments too.

Looking at the movie as a story in and of itself, and throwing out the historical facts, it is an uplifting story that strikes a chord with many of us as Disney fans.  It seems in the movie that through the so-called “magic” of Disney (that thing we can’t quite put into words that makes us such big fans), in this case Walt Disney himself, Travers is able to overcome adversity and find happiness.  As with any Disney movie, everything works out in the end and a positive outcome benefits our main character.  It was definitely more serious than I anticipated (I didn’t think I would be crying at this one), and deals less with the Disney side of things than the previews led me to believe.  But, it has some very light moments, and some very funny scenes—well played by Emma Thompson.   My husband and I went together as a date, but I know my 14 year old son would enjoy it as well.  I’m not as sure about my 10 year old—I think he would find parts of it entertaining, but several of the heavier scenes he might not, and some of the subject matter was a little above his age level (the abusive behaviors).  Also, in my theater the previews and the pre-previews were not appropriate for a younger audience—they were true to the PG13 rating of the movie itself.

I highly recommend going to see Saving Mr. Banks over the holiday season—it isn’t a must-do in the theater, but it is pretty amazing to be immersed in the details of the period scenes (especially visiting Disneyland in 1961 with Walt)!  And be sure to stay for the credits for some great vintage Mary Poppins images, as well as a listen at the part of the tapes that Mrs. Travers insisted they record.