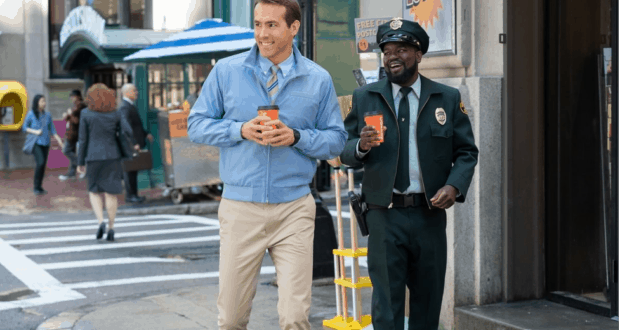 Gaming allows us adventure and excitement in worlds we normally can’t travel to.  The new movie Free Guy goes beyond gaming to help us all feel that there is more to life and the world than what we see at the basic level.

In a recent interview, Ryan Reynolds, Jodie Comer, Joe Keery, Lil Rel Howery, Utkarsh Ambudkar, and director-producer Shawn Levy sat down to talk about that very idea, and how it applies to their new film, Free Guy.  We have parts of the interview below as they discuss the film and what it means to them.

Explaining how the joyfulness of the movie was a natural fit with the story, Reynolds said, “It really speaks to authorship — authorship of your own life and really saying, ‘Hey, I can personally make things change.’ It’s about people taking some of their power back, and stepping into their light and growing, and making the world a better place. Not just in a world that’s embracing not only equality, but equity, which is a different thing than equality. There’s a lot of really cool stuff that’s happening there in the game, and then in the real world in our story.”

Free Guy embraces the love of fandom, and even the cast are smitten with their own work. “This movie was made for this nerd right here,” joked Ambudkar, pointing to himself. Howery summed it up best, saying, “It’s just such a perfect blend of so many different genres in one movie, and I think fans are gonna love it.”

Overall the movie isn’t just for gamers but for everyone that wants just a little bit more from life and the world around them.