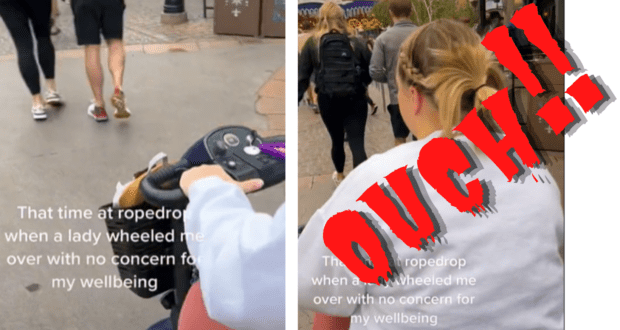 During a mad dash to the themed lands during rope drop at Disneyland, a woman’s foot was run over by a Guest onboard a motorized scooter, according to a Newsweek post.

A video posted online by cmlittleseeds (@kisstiana656) wears a caption that reads, “That time at rope drop when a lady wheeled me over with not concern for my wellbeing.” It seems to shows the exact moment when another Guest on a motorized scooter veers to her left, causing the woman holding the camera to stop when her foot is run over by the wheels of the scooter.

RELATED: Angry, impatient Guest spits on another Guest in line for Pirates of the Caribbean attraction as he races past her toward the loading zone

“Ouch,” reads the text overlay in the video. In a comment about the video, the woman who was run over says the other Guest darted in front of her. 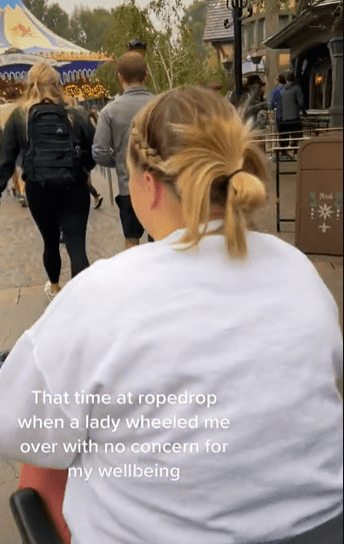 “She literally darted in front of me and ran over my foot,” her post reads.

At the time of this post, the video has been viewed more than 1.5 million times and has garnered almost 1,100 comments.

RELATED: Huge brawl narrowly averted in queue as a Guests cuts in line for attraction more than an hour long

The beginning of the video shows a crowd of Guests making their way to different locations within the park at rope drop. Rope drop has long been a favorite experience among fans of Disney Parks, as they are able to stand in a roped-off area (whether physically roped off or secured by Cast Members) in anticipation of the park’s opening to try their hand at being among the first to enjoy their favorite attractions that day.

As with any crowd, it can be tricky trying to navigate through the park while dodging other Guests (some of whom are running and some of whom who are looking at a park map instead of looking at where they’re walking). It can be especially dangerous in crowded locations at the parks–and especially at rope drop or at park closing–to make your way to your destination when there are thousands of people headed in the same general vicinity. 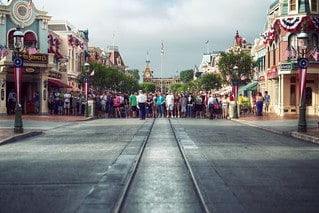 The woman who posted this video did comment after posting that her foot was not broken, but many who commented on the video shared stories of broken bones from being run over by Guests on scooters. Others shared their frustration with scooters in the parks.

“Y’all be careful, this is how my foot got broken the second day into my Disney trip,” said Leanna, a user on TikTok, in response to the video.

RELATED: Lots of Guests are getting this rash at Disney World; have you been a victim yet?

Another user posted a commented, suggesting Disney require Guests on scooters to take a driving test.

“At least you are still standing,” commented a user named Carolyn. “I was literally [run] completely over while standing in line at [A] Bug’s Life. They need to issue [a] driver’s license test.”

One post from a user who says she used to be a PhotoPass Cast Member alleges Cast Members suffer injuries from Guests on scooters.

“I used to work at Disney as [a PhotoPass Cast Member],” reads a post by user nataliaDeLunaM. “We’d literally have Cast Members get broken bones and injuries from [people] in ECVs that were reckless.”

Thankfully, this user wasn’t hurt too badly, but she did say that the other Guest was very rude. First she was run over, and then the Guest who ran over her foot didn’t even stop to apologize or ask her if she was hurt.

2022-02-01
+Becky Burkett
Previous: Don’t Do This! Guests Climb Over Railing to Stand in Restricted Area of EPCOT to Smoke
Next: Extremely Rare Characters to Make Appearance at Disneyland Sweetheart’s Nite!