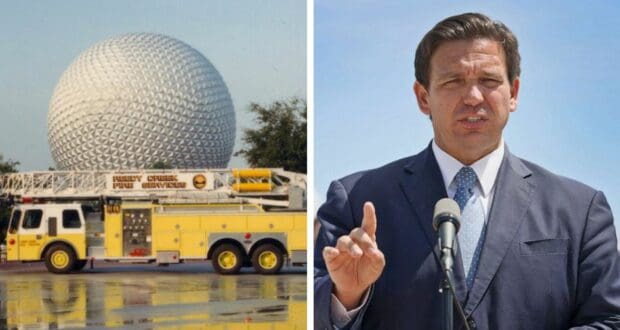 The state of Florida and Reedy Creek had been working in harmony since 1967, but that all changed in March. Florida’s Republican-run Congress passed the Parental Rights in Education bill — also called the “Don’t Say Gay” bill. The Walt Disney Company and its CEO Bob Chapek spoke out against the bill, saying that they would work to see the bill repealed. This angered Florida Republicans, and they were soon looking into dissolving the Reedy Creek Improvement Act.

There are a lot of legal issues standing between Governor DeSantis and Reedy Creek’s dissolution. However, if it does go through, many are wondering what will happen to Reedy Creek. Governor DeSantis is now saying that he has a plan. According to reports, DeSantis is considering creating a new, special district, run by his own appointees, to oversee Reedy Creek and Walt Disney World.

The news was shared by CNN reporter, Natasha Chen:

From my colleague @leylasantiago: 3 democratic state senators spoke at a press conference in Central Florida Mon morning, saying they expect @GovRonDeSantis to establish a new special district run by his own appointees to oversee @WaltDisneyWorld property, after dissolving RCID.

“The governor will establish a new district. That’s our latest word under the general-purpose government controlled by the governor, with appointments by the governor,” Florida State Sen. Linda Stewart (D) who represents parts of Orange County, said.

“The governor will establish a new district. That’s our latest word under the general-purpose government controlled by the governor, with appointments by the governor,” Florida State Sen. Linda Stewart (D) who represents parts of Orange County, said.

In addition to people wondering what would happen to Walt Disney World should Reedy Creek be dissolved, many are asking what will happen to Reedy Creek’s debt. Reedy Creek’s debt is not technically the same as debt incurred by The Walt Disney Company, so, if Reedy Creek ceases to exist, Florida law says that the state will need to pay off that debt. Ron DeSantis has told his supporters that what the law says is not what will happen. He says that there is no way Florida will pay the bill.

At this time, Disney has not publicly commented on Reedy Creek’s potential dissolution or what they are planning to do to fight it.

2022-05-02
Krysten Swensen
Previous: May the 4th Be With You As You Enjoy These Limited-Time Disney World Treats!
Next: Disney’s new residential community in California will begin selling property in less than a year