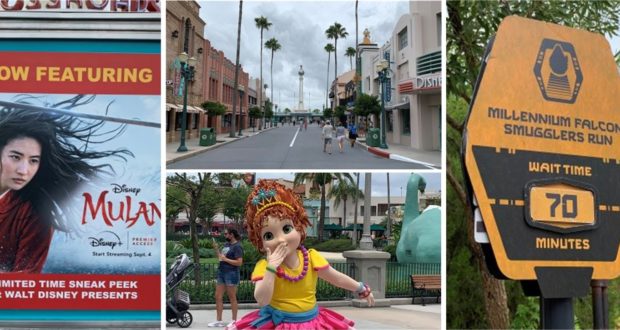 A few days ago I shared my recent weekday trip to Disney’s Hollywood Studios. It was the first time that I had returned since reopening day. I had heard that the park was now packed, but that wasn’t my experience at all. I wondered if maybe the weekends are different. When I saw that I could make a last minute Disney Park Pass reservation for Saturday, August 22, I grabbed it. I wanted to see how much larger the crowd felt.

I will admit that there were more people at Disney’s Hollywood Studios than on a weekday. I had been twice the previous week, and the weekend crowd level was higher. It was still not even close to being crowded. There were times when it looked bad in the distance, but once I got closer I could tell that people were spaced out. There was plenty of social distancing.

Wait Times were much higher than what I had seen earlier in the week. I know that you can’t always go by the My Disney Experience App, or the time posted outside of the ride. Instead, I just looked at the lines. At one point the line for Millennium Falcon: Smugglers Run wound almost to the Toy Story Land entrance. The line for Slinky Dog Dash ended by Sheriff Woody at the main Toy Story Land entrance. Toy Story Mania! had its line on the other side of the same entrance. The queue for Mickey & Minnie’s Runaway Railway always curls around like a snake, and this snake was long! Even Muppet*Vision 3D had people waiting outside. This is where it felt more like a “normal” day. The other parks all have much shorter Wait Times.

To be fair, the Wait Times did go down once the day went on. It rained in the afternoon, and that cleared out some of the guests. In the final hour of the day the posted waits were a third to half of what I saw earlier in the day.

There was another reason why I wanted to stop by Disney’s Hollywood Studios. Inside Walt Disney Presents there is now a preview of the live action version of “Mulan”. The release of the film has been pushed back repeatedly because most movie theaters have been closed due to COVID-19. It will finally be released on September 4. It will be shown in theaters, on Disney+ Premier Access for an additional fee of $29.99, and also on other select platforms. The preview began on Friday, August 21, and I was as curious about how it would be handled as I was anxious to see the preview.

The theater inside Walt Disney Presents usually holds a good amount of people, I have never had to wait to see a film. In the past, guests would just wait outside of the theater for the door to open, and then everyone would enter and move to the end of a row. That isn’t smart now, so instead there was a line to get in. We went in through the queue that is normally for the Monsters Inc. meet and greet. Once through the queue, there were giant dots on the floor outside of the theater for people to wait on.

I was the last one allowed in the theater for my showing. It wasn’t because the theater was full, even with seats and sections blocked off there was room. Instead, the preview runs continually, so they were trying to get people in before the preview started, and then stop the line once the film was playing. The preview runs every 11 minutes, and it is instead of the 15 minute film about Walt Disney.

The preview itself was worth seeing. It focused first on young Mulan, then moved on to the meeting with The Matchmaker. There was more to the preview than that, but I’m not going to give anything else away. In my opinion, the star of the preview was Tzi Ma, who plays Hua Zhou (Mulan’s father). The range of emotions that he showed in just ten minutes was amazing. That made me excited for the film.

Back to the rest of Disney’s Hollywood Studios. Seeing characters was still a breeze, even with more people in the park. The route that they use for the Character Cavalcades allows for plenty of close spots and interaction, away from others. In Galaxy’s Edge, I didn’t see Kylo Ren or the Stormtroopers near the TIE Fighter. I don’t know if it’s because the line for Smugglers Run was that long, or if I just missed them. I did see Rey and Chewbacca, and later Vi Moradi messing with some Stormtroopers.

I didn’t try for a Boarding Pass for Rise of the Resistance because there was a chunk in the middle of the day when I didn’t know if I’d be in the park. The ride was plagued with technical difficulties throughout the day, so I was kind of glad that I didn’t have one. It’s my favorite ride at Walt Disney World, but sometimes trying to get on is stressful, and I didn’t mind not having that extra pressure. I did ride earlier in the week.

No matter which day of the week you visit Disney’s Hollywood Studios, you are going to notice longer Wait Times than at the other three parks. Weekend waits were quite a bit longer than when I had been earlier in the week. That said, they are still nothing like the waits were before the closure. You can easily hit everything, and then ride a favorite a second (and third) time. You just need to be patient, and use sunscreen. A lot of the queues are mostly outdoors right now.