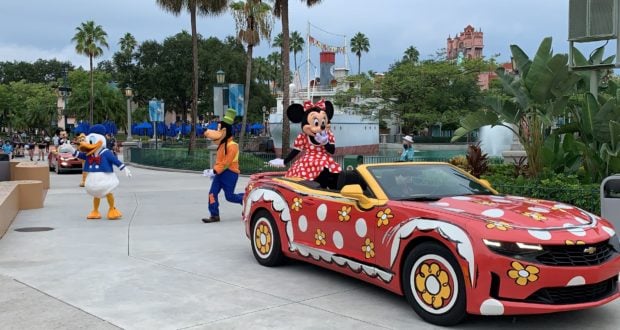 I will admit that I was a little bit nervous, though. I had heard horror stories about long lines and guests refusing to social distance. Many people had said that the park was so packed that it felt like a normal summer day! I’m taking Coronavirus precautions very seriously, and I was prepared to leave if I had the same experience.

Since I didn’t plan to try to get into a Boarding Group for Rise of the Resistance, I waited to arrive. In typical Florida fashion, the sky opened up early in the afternoon, so I waited for the storm to pass before I walked through the front gate. I did not expect what I saw.

Hollywood Boulevard was empty! The rain had turned into a slight drizzle, so I wondered if people were hiding out in stores or maybe chose to get something to eat. I decided to go to Galaxy’s Edge, because I’m a huge “Star Wars” fan and I missed the new land. There were more people than I saw on Hollywood Boulevard, but I would not call it crowded.

I checked the Wait Times and they were longer than what I had seen in the other three parks, but they were much better than a “typical” day at Disney’s Hollywood Studios. The posted time for Smugglers Run was 40 minutes and since I was close by I decided to make that my first ride of the day. I was off about 25 minutes later. While going through the queue I noticed that the Stormtroopers were out again, so I decided to go look for characters once the ride was over. I figured that if it was dry enough for characters, it would also be dry enough for the guests to come out of where they had hidden during the rain.

Only they didn’t come out. The crowd that I was expecting never materialized. Little groups of crowds gather here and there, but it was never a real problem. The largest group that I saw was interacting with Kylo Ren and the Stormtroopers near the TIE Fighter. There was a wonderful Cast Member there who kept making sure that there was distance between groups. She was so nice in the way that she reminded people to stand apart that no one seemed to have a problem with moving a bit.

The other place where social distancing wasn’t being followed closely was on Hollywood Boulevard when the Character Cavalcades would come out. It’s hard to not try to fill in empty spaces when you see Mickey! For me, there was an easy solution to this. There are great viewing areas if you head down the route, so I instead watched in Echo Lake past the Hyperion Theater. There were spots where no one was watching! This made for great character interaction, even if I couldn’t get up close.

As I mentioned, the Wait Times were on the high side, at least compared to the other three parks. I think that there are two reasons for this. First, Disney’s Hollywood Studios is home to the two newest lands and also the newest ride! People want to experience all of these. Second, without live shows, people are looking to still fill their day. Without Indiana Jones or even Jedi Training Academy, there is a gap in what you can do. That means riding some rides more than once. Let’s face it, it isn’t the Magic Kingdom with tons of rides. Even with the two new lands there aren’t that many rides at Disney’s Hollywood Studios. The rides at the park are incredible, which is why people will ride more than once.

There is one other reason why people are saying that Disney’s Hollywood Studios is crowded. Area-wise, it is by far the smallest of the four theme parks. That is why at Disney After Hours event Disney’s Hollywood Studios feels more crowded than a Disney After Hours event at Disney’s Animal Kingdom or the Magic Kingdom, even if the same number of tickets are sold. There’s less space for the same number of people.

Again, Rise of the Resistance wasn’t part of my plans, so I can’t comment on that. I know that there have been plenty of technical problems with the ride lately, and at one point I walked by and there was a fairly long line of people whose groups had been called. Otherwise, though, I was pleased with the improvements that I saw over the day that the park reopened. I was there on a Monday, I know that weekends are busier. (I experienced that at Epcot a couple of weeks ago.) Still, I didn’t see the problems that I have heard so many people complain about. The hiccups from reopening day were gone, and it was good to be “home”.

2020-08-19
PaulaK
Previous: New Dining “Now” Walk-Up List for Table-Service Restaurants Added to My Disney Experience App
Next: 18 Things We Would Do With Unlimited Access to Walt Disney World