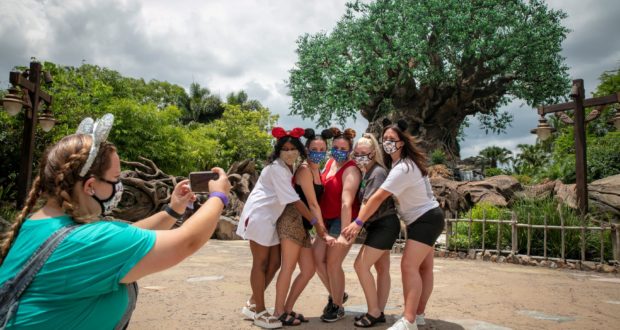 Disney’s Animal Kingdom: 10 Things You Must Know Before Visiting

You’ve probably heard about some of the many changes Walt Disney World has made in order to keep guests and cast members safe during the COVID-19 pandemic.  But how will those affect you and your family if you’re planning a visit in these changing times?  And what will be different at the parks?  Here are the most important things you need to know if you’re visiting Disney’s Animal Kingdom during WDW’s reopening phase. As always, check online for the most up-to-date information before you travel, to avoid disappointment!

If you have little ones who are dinosaur fans, you’re undoubtedly familiar with Animal Kingdom’s Primeval Whirl in DinoLand USA.  This family-friendly roller coaster featured cartoon dinosaurs, but due to mechanical issues, had already been used only seasonally.  Now, it’s been permanently closed, and, as of reopening, doesn’t appear on the Animal Kingdom map.

You can make dining reservations online, 60 days before your visit – but note that many restaurants are temporarily closed, or that dining experiences may be modified.  In Animal Kingdom, you’ll have to forego eating at Tusker House for now, as it’s a character dining experience and is not available.  But there are an impressive number of table service and quick service restaurants that are open (check online for availability); now’s the perfect time to try a new dining experience!  You might just find a new favorite!

Nighttime spectaculars aren’t on the docket right now at Walt Disney World, in order to ensure physical distancing.  But even if they were, one evening show that would not be returning is Rivers of Light: We Are One at Disney’s Animal Kingdom.  The show, a magical mix of floats, water projections and lighting effects, debuted in 2017, but it’s gone for good now – although Disney will be looking at creating a new nighttime spectacular for the park once it’s feasible to do so.

If you’re heading to Disney’s Animal Kingdom soon, it’s worth knowing that you won’t be able to watch any of the park’s spectacular live shows for now.  This includes UP! A Great Bird Adventure, Festival of the Lion King, Finding Nemo – the Musical, Pandora Drummers, Tam Tam Drummers of Harambe, and Donald’s Dino-Bash, among others. However, Animal Encounters: Winged Encounters – The Kingdom Takes Flight is still happening, so keep your eyes peeled for the park’s 6 species of macaw!

To protect other guests, cast members and yourself, a face covering is currently required at all Walt Disney World parks, including Animal Kingdom, for everyone two years old and older.  Keep in mind that even if you or a family member has a medical condition that prevents you from wearing a mask, there are no exceptions to this rule, and families have been turned away from the parks even if one member wasn’t wearing a face covering.  You won’t need a mask if you’re swimming, eating, or taking an outdoor photo.  But you have to be stationary while eating or drinking (in other words, stop and maintain physical distance if you want to eat or drink, no on-the-go munching or drinking allowed).

It gets hot in Orlando, and even if it didn’t, it can be tough to wear a mask all day long at a theme park.  So you may want to take advantage of Animal Kingdom’s two relaxation stations, where you can remove your mask (though social distancing is still required).  We’re told the first relaxation station is at Pizzafari in Discovery Island; Disney’s closed the restaurant, and the tables and chairs are available for guests who want to relax without a mask.  The second location is at Upcountry Landing in Asia, where if you’re lucky, you may even spot a character cavalcade going by.

Getting into Disney’s Animal Kingdom is a little different than it used to be.  You’ll need both valid admission for the park, and a park reservation on the same date, to enter.  You’ll want to check availability for the day(s) you’re hoping to visit the parks before you purchase a ticket, as Disney is limiting capacity throughout the parks for safety during COVID-19.  The Disney Park Pass reservation system, easily accessible online, manages park attendance.

At some locations in Walt Disney World, including Animal Kingdom, temperature screenings are the new norm.  You’ll need to have your temperature taken with a no-touch thermometer, and your temperature will need to be below 100.4 F, before you’re allowed to enter.  Be aware that if your temperature is at or above 100.4 F, everyone in your party will also be refused entry. You can always check your temperature at home, or at your resort, to save yourself time and hassle at an entrance.

As a result of lower park attendance numbers than anticipated since Walt Disney World reopened due to COVID-19, operating hours have been reduced for all WDW parks, including Animal Kingdom. Typically, Disney’s Animal Kingdom opens later than pre-COVID times and closes earlier. Be sure to check the park hours a couple of days before your visit as Disney has been known to extended park hours depending on capacity.

Parades and character meet-and-greets have been put on hold for now across Walt Disney World parks, so you won’t be able to enjoy this Disney staple if you’re visiting during the COVID-19 pandemic.  But it’s not all doom and gloom!  There are new Character Cruises to enjoy at Animal Kingdom, where your favorite Disney characters make an appearance from a safe distance, as they cruise along Discovery River, often dressed in their safari best.  Character Cruises include: Discovery River Character Cruise, Discovery Island Drummers, Donald’s Dino Boat Bash!, and Mickey & Friends Flotilla.