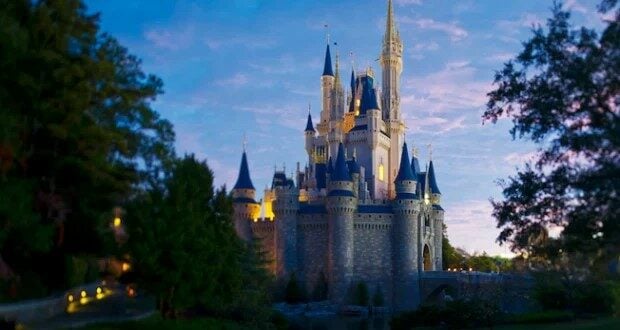 With so many amazing things to enjoy while spending time at the Walt Disney World Resort, Guests want to make the most out of each moment and enjoy as many experiences as possible. While many attractions are must dos, there are certainly some that can be considered overrated for a variety of reasons including having very lengthy wait times. Guests who are looking to spend their time as wisely as possible while at the Walt Disney World Resort might want to avoid these overrated attractions throughout the Disney Parks. 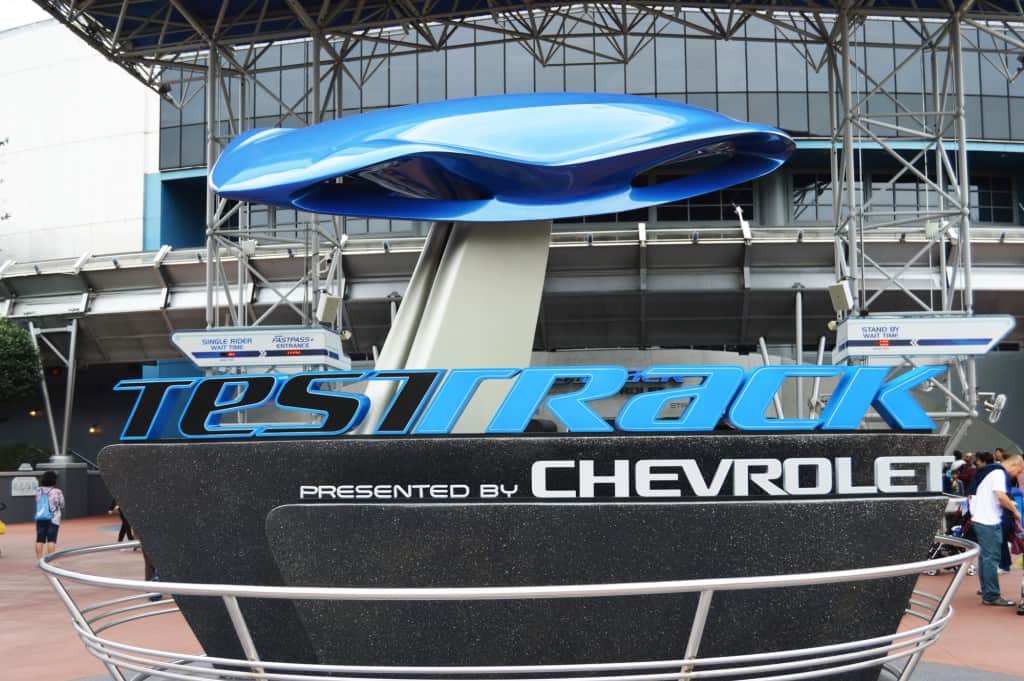 Epcot is home to several attractions that Guests flock to each day including one in the heart of Future World East. Test Track Presented by Chevrolet is a thrilling and innovative attraction that brings Guests into a design studio where they can create unique SIM cars that are then tested on the actual track in a series of experiences. The attraction then culminates with a joy ride on an outdoor piece of track at speeds over sixty miles per hour. While the design aspect is entertaining and the high speed thrills are definitely fun for Guests, Test Track Presented by Chevrolet can be considered overrated for a variety of reasons. There are often glitches with the technology that leave Guests unable to see how their SIM car ranks after each test and wait times for the attraction tend to be very long on busy days in Epcot. Test Track Presented by Chevrolet is also an attraction that frequently closes unexpectedly since safety protocol calls for any experience with an outdoor portion to shut down when there is lightening within a certain distance. Guests who are set on enjoying the overrated attraction should do so early in the mornings when wait times are lowest. 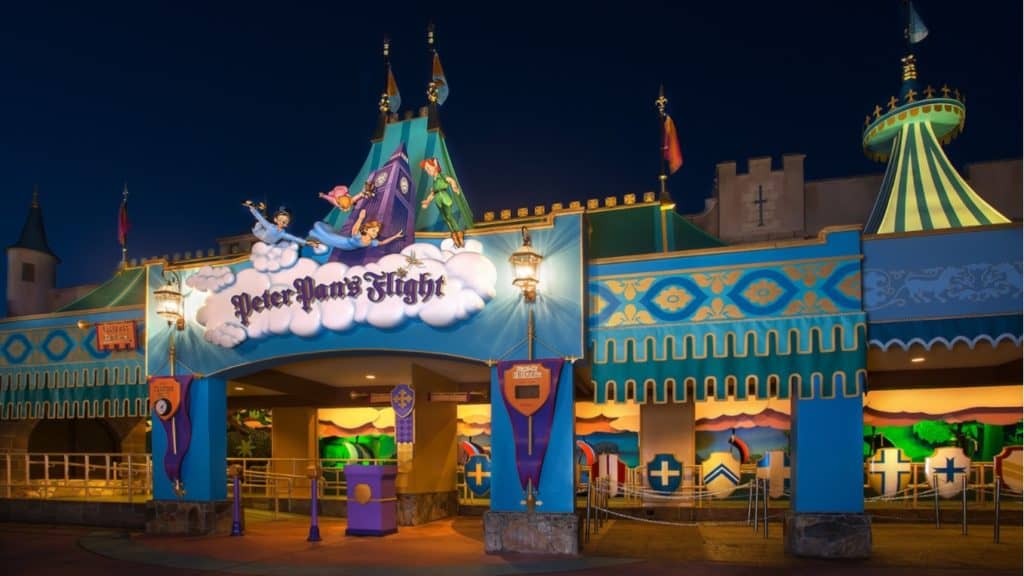 Peter Pan’s Flight in the Magic Kingdom’s Fantasyland is considered by many Guests to be a true classic, but it can also be considered to be an overrated attraction. The standby line brings Guests through the Darling’s home where they can see Tinkerbell fluttering around the children’s nursery and sprinkling them with pixie durst before taking to the skies and flying over beloved scenes from the film. Yes, flying over Neverland and London are magical moments, but Peter Pan’s Flight is one of the attractions that consistently has the highest wait times for one of the shortest overall experiences. Wait times can easily be higher than an hour at any given point in the Magic Kingdom, and the ride itself only lasts about three minutes. This ratio makes it definitely an overrated attraction as it can eat up a large portion of a Guest’s time for a very short experience. 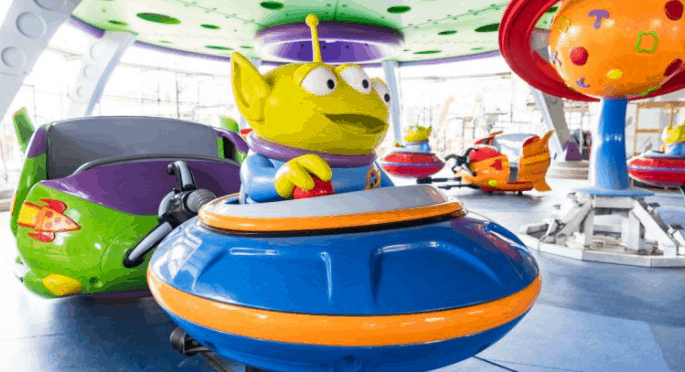 Toy Story fans absolutely love visiting Toy Story Land in Disney’s Hollywood Studios where they can experience the joys of being a toy and exploring all that Andy’s backyard has to offer. The area is home to three attractions- two of which are must dos and one which can be considered overrated. Alien Swirling Saucers is a cutely themed attraction where guests board ride vehicles being pulled by the cute green aliens from the films. Each alien is driving a saucer and rotate around large switchboards on the floor to whip Guests around turns at high speeds. Guests definitely can enjoy a ride on Alien Swirling Saucers as it has entertaining theming and music, but essentially the attraction is a glorified whip attraction from a classic amusement park. Guests are much better off spending their time in Toy Story Land enjoying Toy Story Mania or Slinky Dog Dash. 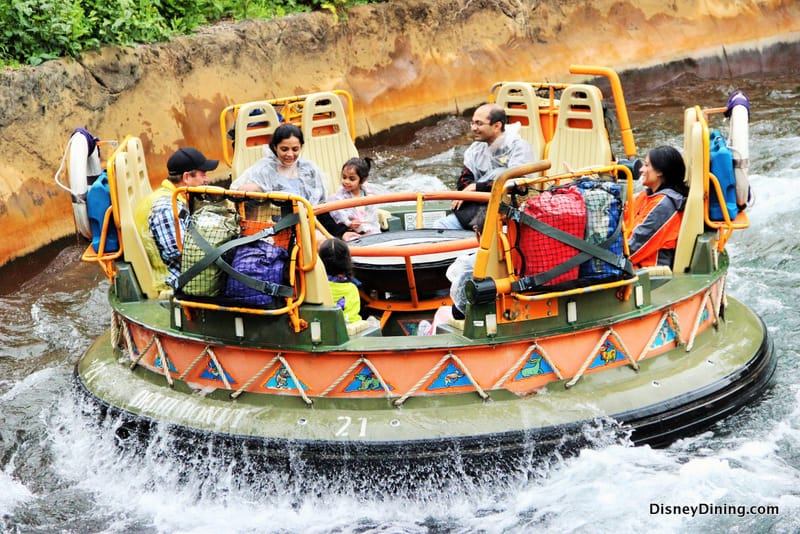 The Asia section of Disney’s Animal Kingdom is home to Kali River Rapids, a thrilling attraction that shares an important message, but is considered to be overrated by many. The attraction has Guests board a large raft for a trip on the Chakranadi River where they learn about the destruction of deforestation and logging and how it negatively impacts wildlife and nature. There are plenty of fun twists, turns, and even one massive drop to be enjoyed on Kali River Rapids, but there is always a high possibility of getting absolutely soaked on the experience. Each dip and twist brings massive splashes, and oftentimes Guests find themselves dripping by the end. No Guest wants to walk around for the rest of a day in Disney’s Animal Kingdom totally soaked, so many often skip Kali River Rapids and consider it to be overrated. 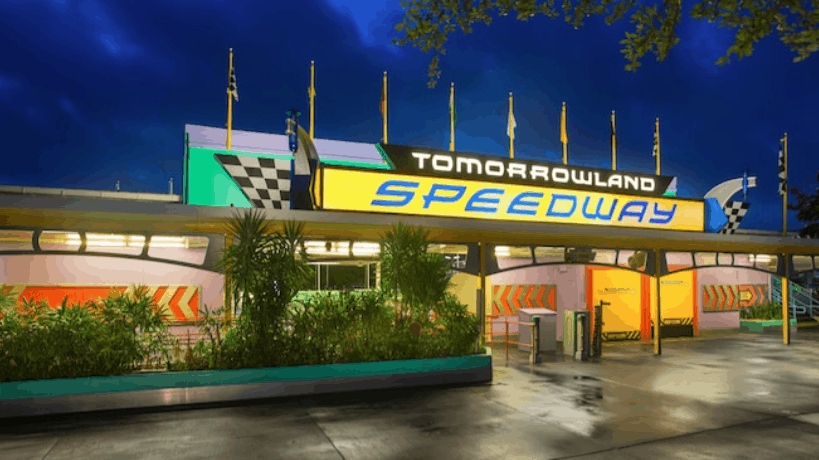 Tomorrowland in the Magic Kingdom is home to some of the most popular attractions in the Disney Park like Space Mountain and the beloved Astro Orbiter, but also an attraction that can be considered overrated. The Tomorrowland Speedway is most certainly a classic where Guests of all ages can get behind the wheel of a classic car and go for a spin around the track. While driving through Tomorrowland is definitely cool and offers up some great sights, the Tomorrowland Speedway can be considered overrated for several reasons. First off, it frequently has a lengthy wait time that has Guests standing in full sun for nearly the entire time. The Tomorrowland Speedway can also be frustrating when driving around if other Guests are having difficulty with their cars or bumping happens. The attraction is certainly not the worst, but can be dubbed overrated for hot wait times and other potential mishaps. 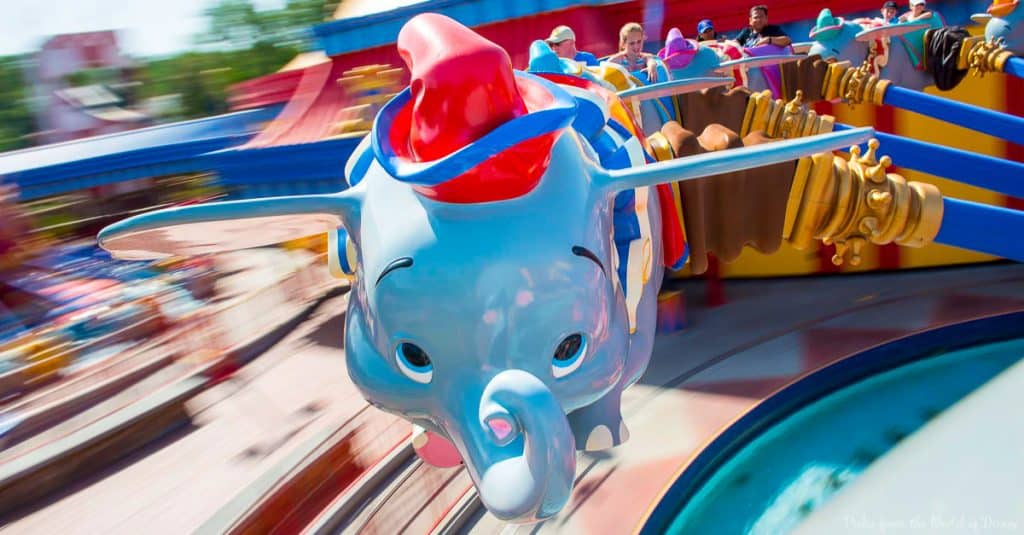 Another attraction in the Magic Kingdom is considered by some Guests to be a rite of passage, but is really overrated when it comes down to it. Dumbo the Flying Elephant in Storybook Circus gives Guests the chance to take to the skies with Dumbo while taking in the sights of nearby areas and the big tops below. Guests definitely enjoy the circus theming of the attraction and the interactive play area for younger Guests to climb and explore, however the attraction itself is a little underwhelming. Dumbo the Flying Elephant might be a classic, but at its core it is no different than the Magic Carpets of Aladdin or TriceraTop Spin with lengthier wait times. 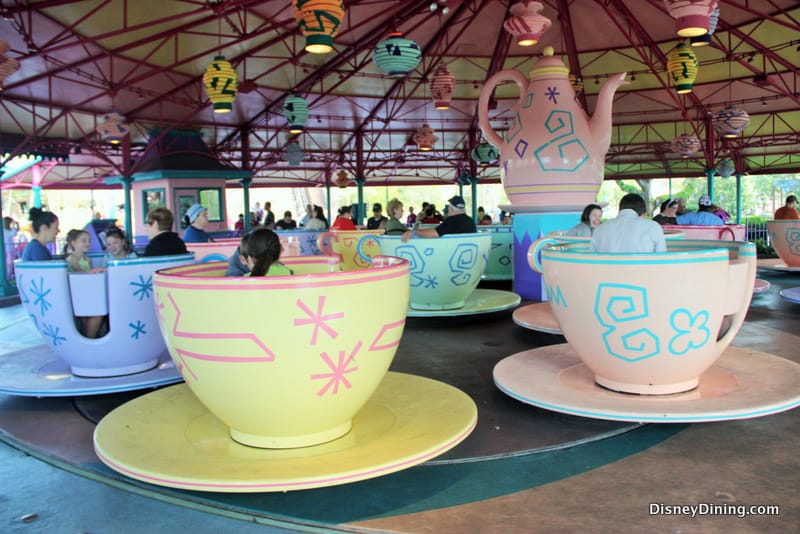 Also found in the Magic Kingdom over in Fantasyland is the Mad Tea Party, a dizzying attraction based on the Unbirthday scene from Alice in Wonderland. Guests board brightly colored tea cups which rotate in groups around a turntable and can be further accelerated and spun by turning a wheel in the center of each teacup. While the concept is cute and wait times are not particularly lengthy for Mad Tea Party, it can definitely be considered overrated by the number of Guests who don’t realize they are prone to motion sickness until it’s too late! Losing the chunk of a day in the Magic Kingdom due to feeling sick after the Mad Tea Party lands this attraction on the overrated list for many Guests. 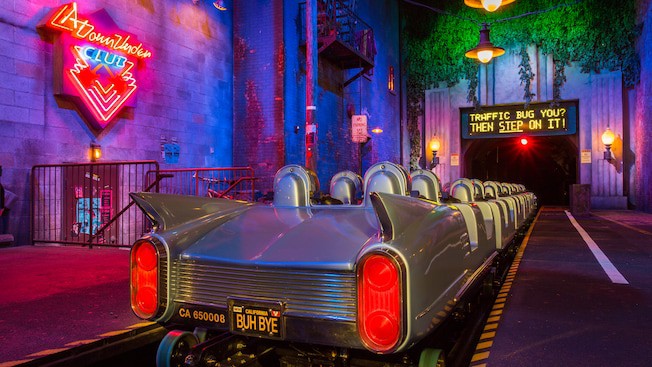 Disney’s Hollywood Studios features its fair share of thrilling attractions, including one that can be considered overrated at the end of Sunset Boulevard. The Rock ‘n’ Roller Coaster Starring Aerosmith is the fastest attraction in Walt Disney World and brings Guests on a high speed adventure to make it to an Aerosmith concert across town on time. While the high speeds, inversions, and immersive story are all appealing to Guests, the Rock ‘n’ Roller Coaster Starring Aerosmith often has extremely lengthy wait times which can eat up a significant portion of any day in Disney’s Hollywood Studios. Guests who are absolutely set on enjoying this attraction can make it worthwhile if they visit first thing in the morning or take advantage of the Single Rider Line when it is open to experience lower wait times. 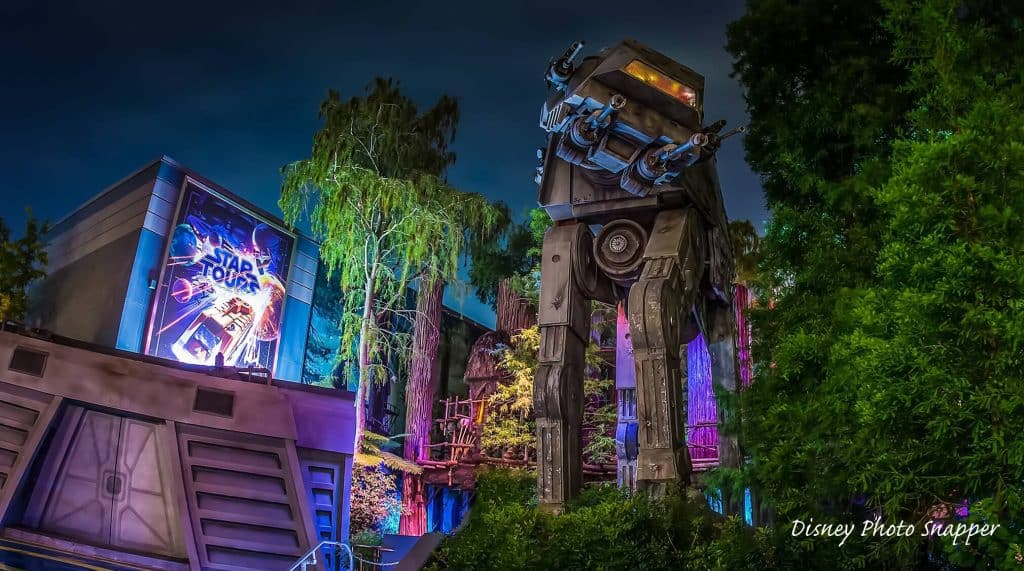 Across Disney’s Hollywood Studios in the Grand Avenue area is another attraction that definitely can be considered thrilling, but also overrated due to recent additions elsewhere in the Disney Park. Star Tours – The Adventures Continue was the original Star Wars attraction in the Disney Park and has been updated throughout the years to bring Guests on randomized adventures through various familiar settings with familiar faces. Utilizing 3D technology and immersive storytelling, Guests do love enjoying this attraction, but it has gone significantly down in the ratings since the opening of Star Wars: Galaxy’s Edge. The newest area in Disney’s Hollywood Studios is another level of immersive and is home to Millennium Falcon: Smuggler’s Run and Star Wars: Ride of the Resistance, both of which utilize more advanced technology and innovative experiences. So while there is nothing particularly wrong with Star Tours – The Adventures Continue, it can definitely be considered overrated compared to its counterparts elsewhere in Disney’s Hollywood Studios.

RELATED: 5 Reasons Why We Love Star Tours – The Adventures Continue 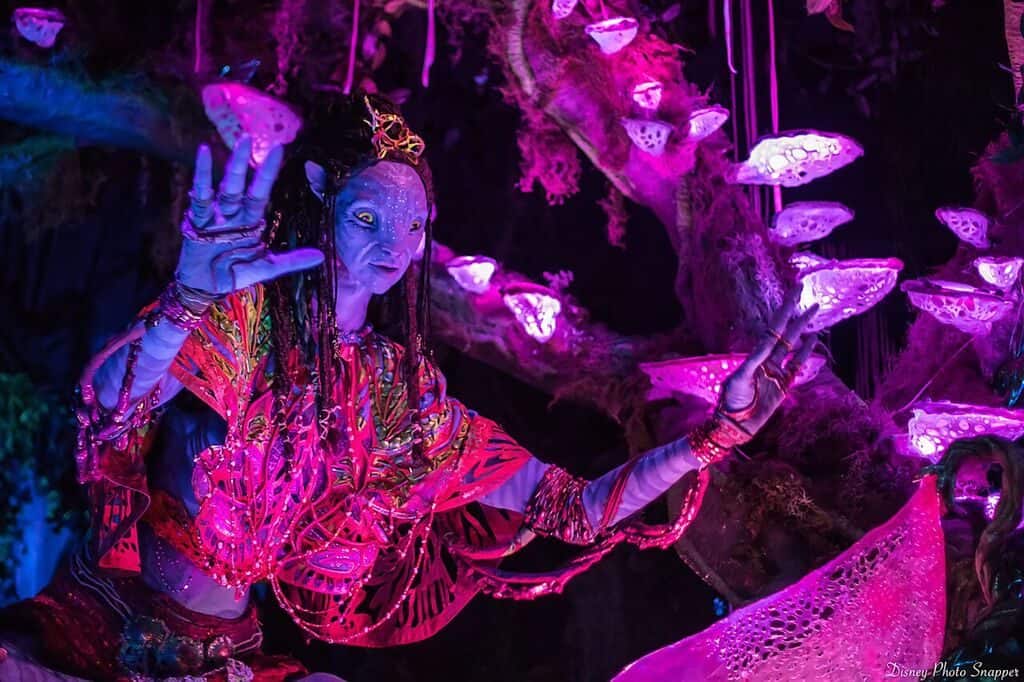 Panodora – The World of Avatar is a beautifully immersive area in Disney’s Animal Kingdom where Guests can wander through the Valley of Mo’ara under floating mountains and enjoy two attractions. Na’vi River Journey is a serene boat ride that brings guests through a bioluminescent forest where all sorts of unique vegetation and creatures roam ending with a sighting of the Shaman of the Songs. The attraction is visually stunning and the Shaman is one of the most technologically advanced audio-animatronics in the world, however the experience is short and not that thrilling overall with typically long wait times. Guests who are looking to make the most of their time in Pandora – The World of Avatar are much better off waiting for the amazing Avatar Flight of Passage nearby.