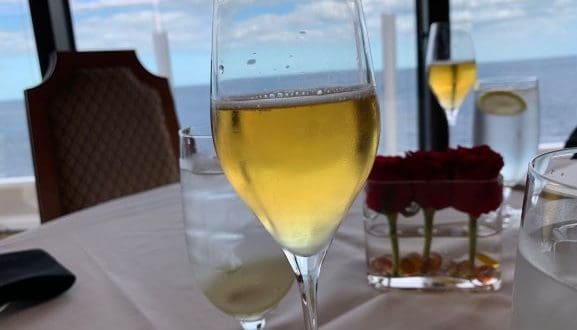 Our Very Merrytime Cruise on the Disney Dream, Day Four

On our first cruise back in January, I enjoyed our days at sea the most. Today was the only day at sea on our hosted Very Merrytime Cruise, and I can’t tell you how much I was looking forward to it! My family and I didn’t have anything scheduled until noon, so we decided to sleep in a bit. The rest was needed, especially after all the activity yesterday on Castaway Cay. Since we had a reservation for brunch at Palo, we decided to skip breakfast.

Palo is a signature dining experience that you will find on all four Disney Cruise Line ships. Brunch and dinner are both offered. We enjoyed a Palo brunch when we were on the Disney Magic, and shortly thereafter I attended a media event that took place in Palo on the Disney Fantasy. So even though this is my second cruise, it’s the third Palo that I’ve seen.

On the Disney Dream and Fantasy, there are two adults-only restaurants; Palo and Remy. Both cost extra. Remy features French food, while Palo is Italian. The package that Disney gave to us for the media cruise included our Palo meal. It was exquisite, just like I expected it to be. You order a hot entrée, and the cold buffet is included as well. You are not going to walk away from Palo feeling hungry, I can assure you.

Our server for Palo was Ricardo, and he was wonderful! I told him when we left that I felt like we had made a new friend. He walked us through the buffet, and the chef came out to talk to my daughter about what she would like, since she has special dietary needs. We tried to not overdo it with the buffet, because we knew that we had hot entrees coming out. The menu at all the Palo restaurants is the same, but there are different touches throughout the restaurants. We had a beautiful view of the ocean at our table. You need to be 18 or older to dine at Palo, and if you can afford it I would recommend adding it into your Disney Cruise Line vacation. Make sure you try the hummus from the buffet. It was the best that I ever had.

Our hosted packed from Disney also included a Rain Forest one day pass for two at Senses Spa. A single day pass normally runs $29. Again, this is an 18 and older experience. There are several different showers that you can experience, they have themes like Rainforest and Water Fun. The pass also includes the use of specially designed deck chairs and a hot tub. A vacation is supposed to be relaxing, and this is one way that you can definitely feel relaxed. A day pass is good all day, so you can return if you want to.

Today we also checked out Vanellope’s Sweets and Treats. We were still full from brunch (Ricardo told us that if we didn’t leave full they weren’t doing their job), but I still wanted to see what it is all about. This is the place to stop if you have a sweet tooth! There are cupcakes and other delectable creations. There is a lot of candy for sale. There are also several flavors of gelato, including fun creations such as Unicorn Gelato. While the products in Vanellope’s cost extra, it’s a great place to stop if you are looking for a special treat.

We also decided to try the Midship Detective Agency today. This is available on the Dream and the Fantasy. You’ll pick up a coded card and pick your mystery (there are three to choose from). You will then go around the ship to certain “paintings”. They are interactive, and you will find a new clue at each one. This is great for all ages, and you can go at your own pace.

The third of the main shows that is permanently on the Disney Dream was tonight. It’s called Disney’s Believe. The show features Genie and many of your other favorite magical Disney characters. If you want to believe in magic, you need to see this show. It’s a typical Disney show, where someone doesn’t believe in magic, but then several characters help to change all of that. It was well done, but after Beauty and the Beast it was a little bit underwhelming. It’s not that there was anything wrong with Disney’s Believe, it’s just that Beauty and the Beast was that good.

Dinner tonight was in the final rotational dining restaurant, Royal Palace. The restaurant is based on some of the most iconic Disney princesses. The final dinner is hard, because you know that it’s almost time to head back to reality. We will get to see our servers one more time tomorrow for breakfast. Like on the Disney Magic, our rotational dining team has been one of the highlights of this trip.

The last night of a Disney Cruise features the See Ya Real Soon party in the atrium. This is a chance to see the characters one last time, as well as many of the ship’s officers. It’s a bittersweet event, because no one wants to leave.

We ended the night with a special treat. Since the movie Frozen II is officially released on November 22, we got to see it on the ship. I’m not going to give anything away except that you’ll love it! When a major Disney, Lucasfilm, or Marvel movie is about to be released during a cruise, it will usually play on the ship the night before the release date. There was a mishap before the movie started. There was a problem with the projector, and so it started late. As they worked to fix the problem Crew Member Tim, who usually runs the Bingo games, entertained us. He started with Frozen trivia. The girl who was the runner up was six years old and talkative, so he interviewed her about first grade. His ad libs were hilarious. A lot of people left because of the delay, but we decided to stay and watch the movie. I’m glad that we did. This was a great way to end our day at sea.