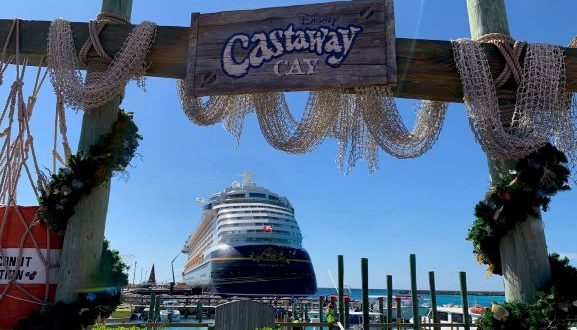 Castaway Cay with the Disney Dream

Our Very Merrytime Cruise on the Disney Dream, Day Three

Today was one of the days that many families look forward to the most when they take a Bahamian cruise on Disney Cruise Line. This was our day at Castaway Cay! Disney’s private island sustained very little damage from Hurricane Dorian back in September. If there were still any signs of Dorian’s wrath, Disney has hidden them well.

This has also been exercise day for my daughter and me. We decided to signed up for the Castaway Cay 5K. We used to participate in races fairly often, but then we moved to Florida and we haven’t done many since. There was an event this morning where the members of my media group could meet the Cruise Director, but my husband volunteered to represent us for that so that my daughter and I could take part in the race.

The Castaway 5K is free for those who are cruising. You do need to sign up, though. You can sign up ahead on time under Onboard Activities on your reservation. If you didn’t, just head to Guest Services. We were already signed up, so we just joined the group that was heading in that direction when the all clear was given to leave the ship. Everyone gathered near the bike rentals, and we were required to sign a waiver. That’s standard procedure for a race. They gave us our bibs, and a little bit after 9:00 we were off!

One of the things that is nice about the Castaway Cay 5K is that it is as serious as you want it to be. We decided to walk most of it (we’re fast walkers), some did a combination of walking and running, and others ran the whole thing. I heard one woman say that she had her personal best time, so I could tell that she took it seriously. The 5K is sort of timed because there’s a clock at the beginning that you will see again at the end, but there aren’t any official “times” for anyone. It’s all done in fun. Everyone received a metal at the end, which is made of rubber. It was a fun way to start the day, but I don’t know if I would want to try it in the middle of July. The November temperatures were good for it.

After we finished we decided to head back to the Dream for breakfast. Our lead server realized at dinner last night that my daughter hadn’t been taking full advantage of Cabanas because of her dietary restrictions, so he put in a special request. The team at Cabanas found the special order and prepared it for her. Everyone is taking such good care of us!

Next we headed back to Castaway Cay. The package that Disney gave us for this hosted trip included bike rentals. My daughter and I had a great time on the bike trail the last time we cruised, and we were excited to do it again! The trail is clearly marked and easy to follow. My favorite part is the tower, where you can get off the bike, climb to the top, and see an incredible view in all directions.

We explored Castaway Cay a bit, then went to Cookie’s BBQ for lunch. Again, our team last night had promised to put in a special order for my daughter. Since she can’t have dairy, they brought her an entire pint of dairy free ice cream.

The Dream left Castaway Cay around 5:00. We watched the island grow smaller and smaller from our veranda. That was also the perfect place from which to watch the sunset. If you’re looking to book a Disney cruise and a veranda is in your budget, go for it! I can’t recommend it enough.

There are currently three shows on the Disney Dream. Since this is a four night cruise, we were given a special performance for the 6:15 show in the Walt Disney Theater. Illusionist David Gatti performed. His show was family friendly, and it was filled with laughs and amazement. Gatti is from Italy, and he performs all over the world. We have a family magician friend, Antwan Towner, who sometimes performs on Disney cruises, so this show was special to us. While watching, we were picturing how other audiences would react to our friend on their cruises.

Dinner was again in Enchanted Garden. The difference was that tonight was Pirate Night! That is something special that Disney Cruise Line does on many voyages; Pirates in the Caribbean. For Pirate Night the menu is the same in the main restaurants, and the staff dresses up like pirates. If you didn’t bring a pirate costume, don’t worry. Disney leaves pirate-themed bandanas in everyone’s staterooms.

There were pirate themed activities the rest of the evening. The best part of all was the deck party. It included fireworks! There is something special about fireworks at sea. The show is not as grand as something like Happily Ever After, but that doesn’t matter. They are still a lot of fun, and everyone seemed to enjoy them. Disney is the only cruise line that does fireworks at sea.

It’s been a long, but fun day. We certainly got our exercise in! Tomorrow is sadly our last full day. It’s our only day at sea. We’re having brunch at Palo tomorrow. There is a special treat at the end of the day tomorrow that I will share with you once it’s over.