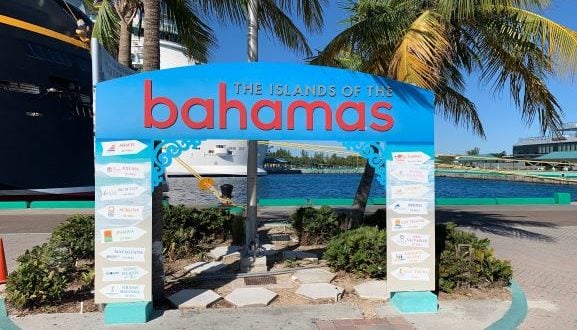 Our Very Merrytime Cruise on the Disney Dream, Day Two

It’s the second day of our hosted Very Merrytime Cruise on the Disney Dream. Today we’re in Nassau. We watched as the islands of the Bahamas grew closer. My family and I were here a few months ago for a work related trip for my husband, so we didn’t plan to do a lot of exploring. When we were here back in March we could see the cruise ships from our hotel, today we could see the hotel from our cruise ship.

We had a tour this morning of the two of the kids clubs. We started in the Oceaneer Club and Lab. This is for kids ages three through 12. There are some pretty amazing areas in these spaces. Kids can visit Pixie Hollow, Andy’s Room, Disney Infinity, and (my favorite) The Millennium Falcon. I have heard stories about kids who don’t want to leave the clubs, and I can see why! We then hit Vibe, which is for ages 14 through 17. There are interactive video games (including tournaments), karaoke, and plenty of other fun activities that were designed specifically for teens. The Edge is for ages 11 through 14. We didn’t see the space, but we were told that it’s a combination of the other two. There are interactive activities, plus there is science, trivia, and similar activities.

When a ship is at a port the shops are closed because of laws regarding sales tax. (There is no sales tax at seas because it’s international space.) So while we were docked we were given a look at the merchandise that is for sale. This included merchandise that is exclusive to the Very Merrytime Cruises. We also saw some of the items from the Nautical Navy Collection. One thing that was stressed over and over again is that guest feedback is very important. Disney wants to know what people like, what they don’t like, and if they have any suggestions. We also were able to stop by Tiffany’s. The store on the Dream has only been open a few months, there is also one of the Disney Fantasy. Each cruise they hold a Breakfast at Tiffany’s event. They serve blue mimosas and croissants, and guests can take a look at the collection.

After that our group learned about the food that is served on the Disney Dream. Food is a large part of any Disney Cruise Line vacation. Not only are breakfast, lunch, and dinner all served, there are other places to eat, most of which is included with your fare. Alcohol and specialties coffees are not included. There are two adults-only restaurants, Remy and Palo, and those cost extra as well. Vanellope’s Sweets & Treats also costs extra. One thing that sets Disney Cruise Line above many of the others is that 24 hour a day rom service is included! Some of the room service items do have an upcharge, but there are plenty of items that you can order that do not cost more.

At our special presentation we got to see some of the foods that are available on the Disney Dream. We also learned that the Dream is the first ship in the fleet to have a specific allergy-friendly menu. It lists what is safe to eat from the different main restaurants for those who have one of the eight most common allergies. Of course, if someone has a different allergy that is not on the list, Disney will still take good care of them. The staff wants to make sure that everyone has delicious meals that they can safely enjoy.

We decided to try Luigi’s Pizza for lunch. Speaking of allergies, my daughter can’t have dairy, but they were still able to accommodate us. They made a special pizza with all of the toppings that she wanted and dairy free cheese. All that we had to do was ask.

Our next step was to get off the ship and visit the port of call. As I already said, we were in the Bahamas a few months ago, so there wasn’t really all that much that we wanted to do. There is an area right when you get off where you can purchase various items, sign up for a tour, or get a taxi. We walked around for a little while, then headed back onboard. I would recommend if you’re taking a cruise that includes a day in Nassau to sign up for an excursion. It’s a beautiful area, with white sand beaches, turquois blue water, and plenty of attractions. There is a lot to do. The area where you first get off the ship is not a good representation of the islands.

Next it was Beauty and the Beast in the Walt Disney Theater. I had heard great things about this show, and it did not disappoint! The music, the dancing, the costumes, and of course the story were all what you would expect. The acting was top notch as well. Since Beauty and the Beast is longer than the other shows, we needed to be at the theater at 6:00 instead of 6:15 like the rest of the evenings. This show has won awards, and it is easy to see why. The choreography blew me away at times. It wasn’t just the dance numbers, the fight between the Beast and Gaston was so well done. Our audience gave it a well-deserved standing ovation.

Our dinner rotation tonight and tomorrow night is Enchanted Garden. Tomorrow night is Pirate Night, so there’s a special menu. I loved the theming of this restaurant. It is a stunning space. There is a fountain inside the restaurant! There is a lot of green because it’s a garden, and there are lighting effects. It made for a fun and relaxing place to dine. I also really liked the food, this was one of the best dinners that I’ve had on either Disney cruise.

We decided to search out some characters after dinner, since today they were dressed for the holidays. The character lines were a bit longer than those that I remember on the Disney Magic, but they still moved quickly. I like how into it the performers are. While the character performers are great at Walt Disney World, those on the Disney Dream have really stepped it up a notch.

That’s a wrap-up of the second day of our Disney Dream voyage. Tomorrow we will be at Castaway Cay. I’ve heard that it’s been decorated for the holidays, and I am very excited to see it!