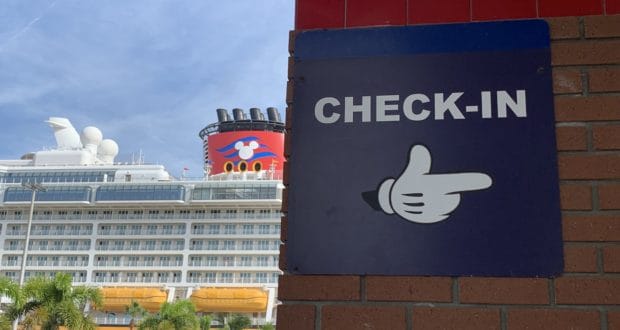 Our Very Merrytime Cruise on the Disney Dream, Day One

Our Very Merrytime Cruise on the Disney Dream has begun! Our voyage is hosted by Disney, and it is a four night journey that will include stops in Nassau and Castaway Cay. My husband and daughter have joined me.

Arriving this morning was easy. We dropped off our luggage, and then we got in line to board. There are two places where they needed to check our passports. Actually walking onto the ship is a surreal experience. A crew member asked our last name, then we were announced. I know that they do it for everyone, but it did make me feel special.

We headed to Cabanas for lunch. The lunch buffet has plenty of options; pizza, salads, pasta, and even a carving station. There are also plenty of desserts. Soft drinks and hot beverages are included, and there is a bar if you’d like to order something else. We decided to eat outside, because the view from Cabanas is incredible. The food is very good as well.

After lunch the staterooms were open, so we decided to check ours out. It is very similar to the room that we had on the Disney Magic back in January. There’s one bed, plus a sofa that turns into another bed. A third bed can be pulled from the ceiling if necessary. The stateroom has a split bathroom, which is really convenient. The shower is on one side, and the toilet is on the other. Both sides have sinks, and both have doors that close all the way.

One thing that I am not yet sold on is the way that the electricity works in the room. You need to have your Key to the World Card in a slot next to the door in order for the lights and the TV to work. I am not a fan, but I do realize that it saves electricity. Then again, it’s really not that big of a deal, it’s something that I will get used to.

We did some exploring before we had our Assembly Drill. This is mandatory for all guests. Everyone is assigned a station, and that was where we needed to meet. We had a hard time finding our station! They’re marked by letters, and we found I think every other letter, just not ours. Fortunately a crew member was able to point us in the right direction with time to spare.

The Sail Away Party came after the drill. This is the perfect way to start what I hope will be a perfect week! Several crew members came out to lead everyone in song and dance, and then they were joined by classic Disney characters. It is so much fun, I couldn’t help but sing along. Then, suddenly, we were on our way.

After the deck party, we had a meeting with the wonderful Disney staff that has put our media group together. I can’t thank them enough, they have worked really hard. We then had a little bit of time, so we returned to our stateroom. We were able to watch the sunset from our veranda, which was beautiful.

Next it was time for the first show of the trip. We got to see The Golden Mickeys. Before the show Stephen, our cruise director, spoke to the audience. He was hilarious! He had a lot of good tips for the next few days, and he presented them in a way that made an impact. The show itself was enjoyable. The Golden Mickeys in the title were awards for various elements in Disney movies such as love or friendship. The show was live action, but there was some animation involved, and at one point there were a few puppets. Mickey and Minnie were also part of it.

Mickey and Minnie were also in the atrium a few minutes later, because it was time to light the Christmas tree! The tree is beautiful without the lights, but this ceremony and the lights made it even more spectacular.

Our dinner tonight was at Animator’s Palate. Each ship in the Disney Cruise Line has a version of this restaurant, so I was excited to see what was different. This one had a lot of live action from Nemo and his friends. Crush made the rounds, and talked with many of the guests. (It was similar to Turtle Talk with Crush.) We met our serving team for rotational dining. Each Disney Cruise Line ship has three nighttime restaurants, and guests are assigned where they will dine. They will eat at the same table number and have the same staff each night, they travel to your restaurant with you. Our serving team is Jude and Sherry, and we adore them already. Dining at Animator’s Palate is a treat as well, the food was wonderful.

Santa has now arrived on our Very Merrytime Cruise. He brought Mrs. Claus with him. We wrapped up our first day with Santa’s Winter Wonderland Ball. Santa and his wife (she’s always wanted to take a Caribbean cruise) were joined by singers and characters, all dressed up in their holiday best. There was even “snow”. It was a great way to end the day.