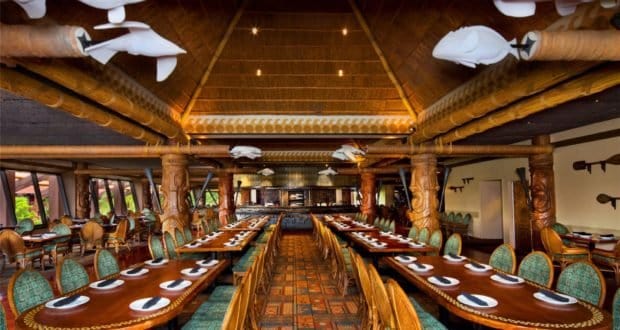 Aloha, Disney ohana! When it was announced Disney’s Polynesian Village Resort’s flagship restaurant, ‘Ohana, would reopen on July 9, Disney foodies were ecstatic! There was however a surprisingly large amount of people that were not happy that Disney left out the beloved noodles on the first cut of the menu. Well, Disney listened, and the noodles returned. ‘Ohana has been welcoming Guests back to the restaurant since opening, but unfortunately, the food reviews have not been spectacular. There has been another outcry from Disney fans to once again bring back some of the favorites that made ‘Ohana such a great place to eat. Why change what was so right in the beginning, right? It seems like once again Disney has listened… and decided to change up the menu for a second time.

As shared by reporter, Scott Gustin via Twitter: “NEW: ‘Ohana means family and family means shrimp casserole gets left behind. The new ‘Ohana menu keeps the “dinner skillet” but brings back peel-n-eat shrimp, grilled chicken, and ‘Ohana bread. Goodbye shrimp casserole, roasted chicken, sausage, scones, and biscuits.” You can see the menu differences in the before and after screenshots of the menus as shared in his tweet.

2021-08-17
Jamie Sylvester
Previous: Get Tickets Now For Shang-Chi and The Legend of The Ten Rings
Next: No Word on Disney World’s Senses Spa – But Disneyland Is Getting a New Spa