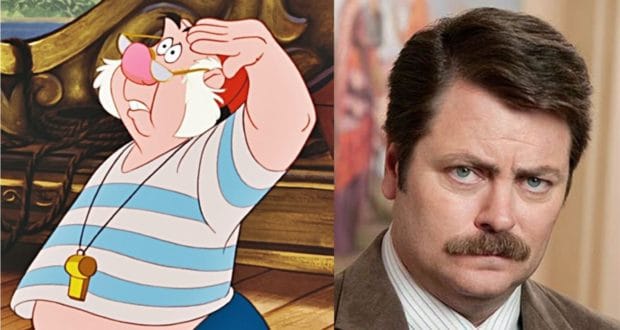 One of our favorite characters in Peter Pan has to be Smee! He brings that perfect dose of silly to the serious Captain Hook and always keep things entertaining. Well, we are now learning for the live action Peter Pan film called “Peter Pan and Wendy”, the hilarious Nick Offerman has been offered the role of Smee. And yes, we really hope he takes it!

As shared by Theilluminerdi: “With Jude Law as Captain Hook in this live-action adaptation finding the right Smee is an important decision and it looks like Disney has their eye on a masterful comedian. The Illuminerdi has exclusively learned that Nick Offerman has been offered the role of Smee in Peter Pan And Wendy and he could be just the man for the job.”

“Nick Offerman has had an impressive career in comedy, but is probably best known for playing Ron Swanson on Parks & Recreation. He has an impressive range playing a number of different types of characters and he definitely has the ability to play a pirate with a kind streak. Offerman’s chemistry with Jude Law would probably be one of the most interesting dynamics to see should he join the cast.”

Peter Pan And Wendy will be based primarily on the 1953 Disney animated classic, Peter Pan. The film is scheduled to begin filming in March 2021 and will premiere on Disney Plus.