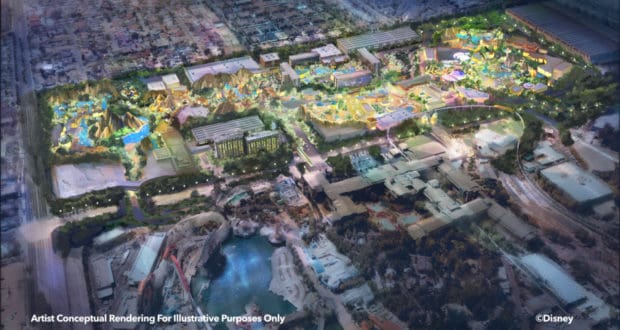 Big Disney news coming out of California! Disneyland announced during a presentation today, March 25, that they are working on project “DisneylandForward” which is Disney’s effort to work with the city to grow the Disneyland resort and update the blueprint for the resort district.

As reported by the OCRegister: Disneyland has unveiled long-term plans for theme park, retail and parking expansion as the Anaheim theme park prepares to work with the city to reimagine what the resort district will look like over the next couple decades. DisneylandForward is Disney’s effort to work with the city to grow the Disneyland resort, update the blueprint for the resort district and propel Anaheim’s economic rebound following the COVID-19 pandemic.

Disney will be asking the city over the next weeks and months for more flexibility in plans approved in the 1990s in order to be able to add a mix of theme park, hotel, retail, dining and entertainment on the eastern and western edges of the Disneyland resort.

“What we do know today is that guests need and want more,” Lomboy said. “In order to give guests what they want, we need more flexibility here in Anaheim. Guests are demanding immersive integrated experiences that are not singular in their uses. We no longer think of uses as separate. Retail, dining, entertainment, theme parks and hotels are all part of the same experiences in the same place. And we need the space in our lands to create story-rich environments.”

However, the company’s ambitions will need to be signed off by Anaheim leaders after a back-and-forth planning process that’s expected to last two years before final decisions are made..

The DisneylandForward presentation included concept art from Disney theme park projects around the globe that provide a “flavor” of what future expansion could look like at the Disneyland resort. The projects presented by Lomboy included the Tangled, Frozen and Peter Pan themed lands coming to Tokyo Disneyland in Japan, the Zootopia themed land, Disneytown retail district and the Tron roller coaster at Shanghai Disneyland in China and Toy Story Land and Disney Springs shopping district at Walt Disney World in Florida.

The DisneylandForward conceptual development plan stays within Disney’s existing 500-acre property in Anaheim with no physical expansion or additional acreage. “We’re not changing the size of the toast, we’re just spreading the peanut butter around,” according to a Disney official.