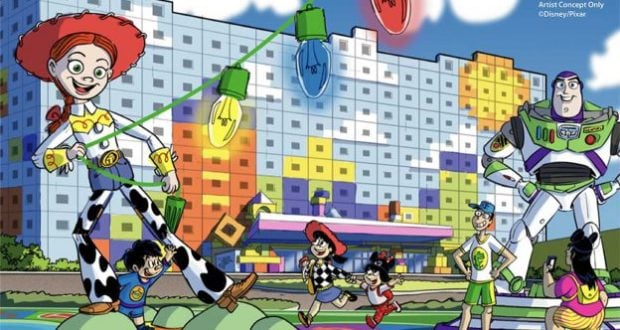 If you’re a super fan of all things surrounding the Disney / Pixar films, Toy Story, then you may want to start saving up for a plane ticket to Japan! A new resort is in the works, and Disney has announced the resort’s official name. Check out the details below!

As shared by DisneyParksBlog: “Tokyo Disney Resort has announced that its new Toy Story-themed hotel will be called Tokyo Disney Resort Toy Story Hotel. With 595 guest rooms and 11 floors, the hotel’s exterior, entrance, lobby and other areas will bring to life the world of toys based on the Academy Award-winning Disney and Pixar “Toy Story” films. This will be the fifth Disney hotel to open in Japan but the first “moderate type” Disney hotel in the country, offering guests a new option between “deluxe type” and “value type” hotels. The hotel is situated directly in front of Bayside Station on the Disney Resort Line, providing guests easy access to both Tokyo Disneyland and Tokyo DisneySea Parks.”

We’re excited to see how this new Disney Resort unfolds! We absolutely adore all things Toy Story, so we are looking forward to a resort that incorporates all the favorite Toy Story characters such as Woody, Buzz and Jessie. While no opening date has been announced just yet, we’ll keep you posted so you can begin planning your Tokyo Disney Resort getaway!