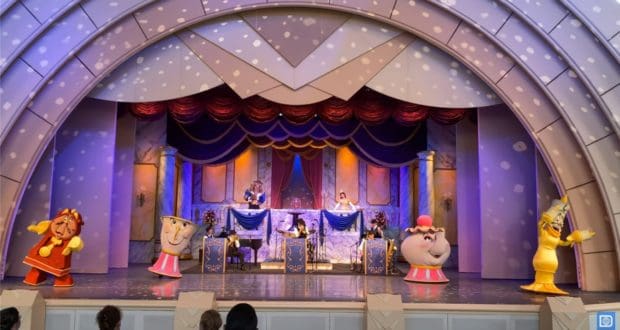 An unexpected show debuted today at Walt Disney World’s Hollywood Studios! Without an official announcement from Disney, “Beauty and the Beast – Live on Stage” Theater of the Stars on Sunset Boulevard opened today with “The Disney Society Orchestra and Friends”.

The majority of the roughly 17-minute show features a very talented 6-piece orchestra, as they perform several favorite Disney songs. Towards the end of the performance, characters from Beauty and the Beast take the stage including some friends we are used to seeing during Beauty and the Beast – Live on Stage. The characters maintain social distancing while performing.

While this is definitely not the same as the beloved Beauty and the Beast – Live on Stage show, you can tell Disney is making an effort to allow for performances despite current disagreements with the actors union which represents several Cast Member performers.

A similar move by Disney was made for the previous “UP! A Great Bird Adventure” at Disney’s Animal Kingdom which is now “Feathered Friends in Flight”.

The first performance was videoed by WDWNT and shared on YouTube as found here:

What are your thoughts of the new show?

2020-08-02
Jamie Sylvester
Previous: We All Need This “Porg on Board” Plush In Our Lives!
Next: The Reopening of Walt Disney World: 20 Things You Must-Know Before Visiting