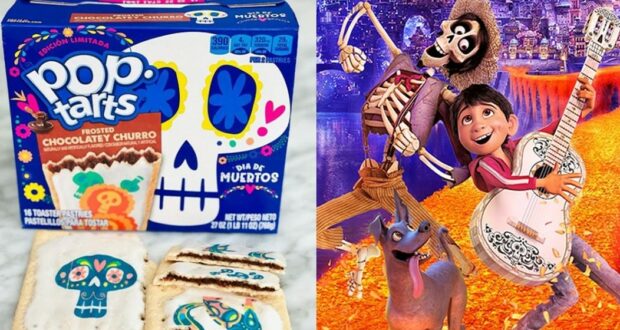 New Pop-Tarts Released & They Are Giving Us “Coco” Vibes!

One of our very favorite Disney and Pixar animated films has to be Coco. This underrated movie was released in 2017 and is still a fan favorite as viewers step inside the story of a 12-year-old boy named Miguel who accidentally sends himself to the Land of the Dead during the annual Día de Muertos, or the Day of the Dead. The colorful scenes, incredible music, emotional rollercoaster, and excellent characters make Coco a top pick on our Disney film list. And now, a new Pop-Tart has been released that has us singing, “Remember Me”… all the way to the grocery store.

Día de Muertos, or the Day of the Dead, is an annual tradition that originated in Mexico that begins each year on November 1 and runs through November 2. With the date quickly approaching, it looks like Pop-Tarts has decided to get in on holiday with a new release that gives us Coco vibes! As reported by Thrillist: “Pop-Tarts is dropping a limited-edition flavor to celebrate Día de Muertos. The new toaster pastries will come in Frosted Chocolatey Churro inspired by the popular fried dough snack. The Pop-Tarts feature rich chocolate and cinnamon-flavored filling paired with a tender pastry crust. The outside of the pastry will include all-new printed fun designs.” Yes – you read that right, the Dia de Muertos Poptart is CHURRO flavored!

The new Pop-Tarts were created in partnership with Pop-Tarts and Kellogg’s HOLA Latino Business Employee Resource Group. The art designs all represent a culture aspect of the holiday including:

As shared via @junkfoodonthego Instagram: “Frosted Chocolatey Churro flavor Pop-Tarts with Limited Edition Dia de Muertos Packaging & Designs is out in stores now @kelloggsus @poptartsus. The special designs celebrate loved ones that have passed for Day of the Dead. Pop-Tarts has also partnered with NALAC to provide grants to 4 Latinx organizations.”

RELATED: Could a Coco Attraction be Coming to Walt Disney World?

It sounds like it’s time to settle in with the family, turn on Disney’s Coco, and enjoy this new pastry Pop Tart and limited edition box for the special Dia de Muertos holiday! Check out your local grocery store before this tasty new Pop Tart sells out, as they are now on shelves nationwide for a limited time. In the meantime, Disney fans will also want to prepare for the new Coco scenes making their way to Mickey’s PhilharMagic at Magic Kingdom in time for Walt Disney World’s 50th Anniversary Celebration kicking off on October 1, 2021!