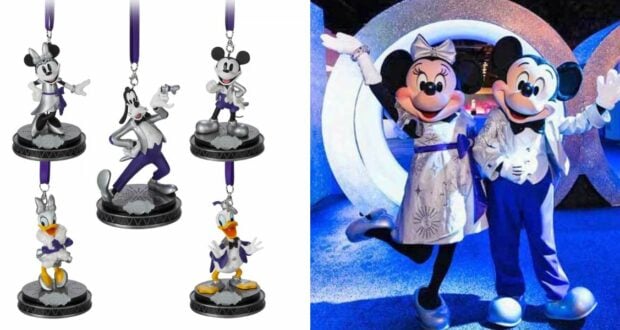 Calling all Disney collectors! We’re excited to share the news that Disney has released an all-new ornament set for the 100th Anniversary of The Walt Disney Company in 2023.

With 2023 right around the corner, we’re seeing Walt Disney World Resort and Disneyland Resort begin their preparations for the 100th Anniversary of The Walt Disney Company.

shopDisney describes the new merchandise with, “Deck your halls with Mickey and the gang and this set of five figural ornaments. Dressed to the nines with ”platinum” accents, Mickey, Minnie, Donald, Daisy and Goofy will make every season magical.”

The “Magic in the details” goes on to note:

Looking for more must-have collectors’ items for the 100th Anniversary? Disney has also released a new set of Minnie Mouse Disney100 Ear Headband for Adults for $39.99, with the description:

“Memories of Disney magic will continue to shine whenever you wear this sparkly ear headband. Made with glittering lurex, the padded ears are decorated with silvery appliqués while the bow features a Disney100 logo metal pin. It makes a dazzling accessory to any outfit.”

Ready to snag your collectors’ items before they are gone? Check out shopDisney here for the full Disney100 Platinum Celebration Collection. Happy shopping, Disney fans!

2022-12-12
Jamie Sylvester
Previous: The Greatly Missed Robin Williams Is Trending on Social Media
Next: Alternative Seating Option to Be Available on TRON Coaster