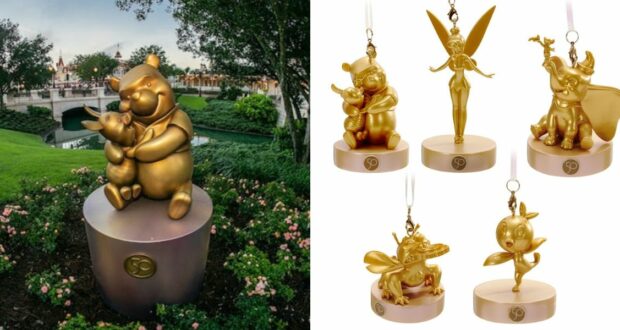 Calling all Disney collectors! We may be in the middle of the fall season with pumpkin-spiced everything but ’tis the season to prepare for the holidays. And that’s exactly what Disney is doing with the release of the highly coveted Fab 50 character collection ornament set.

Walt Disney World Resort launched its 50th Anniversary over a year ago on October 1, 2021. As the celebration continues for a full 18 months, Disney Park Guests can still check out the stunning character sculptures throughout Magic Kingdom Park, EPCOT, Disney’s Hollywood Studios, and Disney’s Animal Kingdom.

With a total of 50 characters, the Fab 50 character sculptures are must-sees and perfect for photos with family and friends. PLUS – a highlight is these Park sculptures interact with the new MagicBand+.

And now, you can have a dose of the beautiful Fab 50 in your home this holiday season with an ornament set that will brighten any Disney fan’s tree or seasonal decor.

The Walt Disney World Fab 50 Character Collection Ornament Set – Magic Kingdom is available via shopDisney for $49.99. The ornament set is described with:

“Join The World’s Most Magical Celebration with a boxed collection of five of our golden Fab 50 character ornaments corresponding to statues on display at the Magic Kingdom for Walt Disney World’s 50th Anniversary.”

The set of 5 fully sculpted ornaments includes characters seen on display as Fab 50 statues at the Magic Kingdom, including Tinker Bell, Dumbo with Timothy Mouse, Winnie the Pooh with Piglet, Orange Bird, and Stitch.

The golden finish and satin ribbon make it a perfect ornament for the Christmas tree. Or, with a flat base, it’s a great addition to a table or shelf decoration. But DON’T WAIT to snag yours now! Last year, the Fab 50 Character Ornament Collection sets sold out quickly.

Looking for more Fab 50 items to add to your at-home Disney decor? While not ornaments, the Walt Disney World Fab 50 Series of figures come in blind packs for all those Disney collectors out there.

Don’t wait to collect your Fab 50 additions before they are gone. Happy shopping, Disney fans!