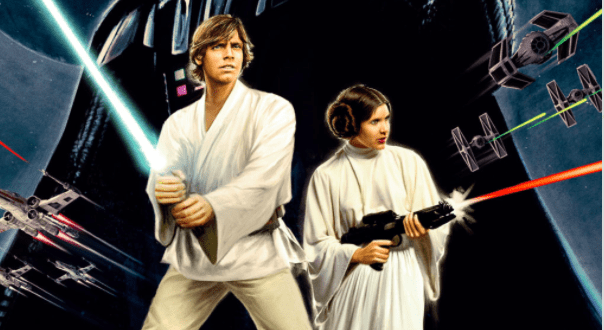 New Biography “Skywalker: A Family At War” Dives Into the Skywalker Family History

We are excited for a new biography titled” Skywalker: A Family at War” that will allow us to delve into the history of the first family of Star Wars.

For three generations, members of the Skywalker family — whether born into the name or chosen to carry the legacy — struggled to balance their own emotions and the external strife in the galaxy far, far away. In the new book, Skywalker: A Family at War, author Kristin Baver will examine the events that unfolded in the Skywalker saga on screen as well as through books, comics, and other canonical storytelling to give a detailed account of the lives of key members of the family amid their travails and triumphs.

As revealed on This Week! In Star Wars, StarWars.com is pleased to give fans a first look at the cover for this new biography, available for pre-order now, with art by Matt Ferguson.

Ferguson, who also created last year’s poster art for the 40th anniversary celebration of Star Wars: The Empire Strikes Back, says this illustration was inspired by the original art that accompanied the release of what would become Star Wars: A New Hope in 1977, both the US one sheet by Tom Jung and the UK version by Tom Chantrell. Ferguson also drew on concept pieces from John Berkey. “I have very strong memories of pouring over the photos in the novelization before I got to see the film, and the imagery sparked my imagination like nothing else,” he adds.

the text will encompass the prequel era through the events in the sequel trilogy, tracing known biographical information on Shmi Skywalker, her son Anakin Skywalker, and ultimately his grandson, Ben Solo, and the scavenger Rey.

“I’m so thrilled to be able to tell the story of the Skywalkers through the lens of a biographer,” says Baver, the associate editor of StarWars.com. “From the outset, I knew I wanted to treat the family as if they were real people, with compassion and empathy, while simultaneously crafting an unflinching portrait of their accomplishments and their failures. These characters are larger than life yet so fragile and unmistakably human, and that comes into focus when you study how their actions impact the greater galaxy and their family.”

For the author, getting the chance to document the Skywalker saga in a new light was the culmination of a nearly life-long love for the franchise. “When I first saw Star Wars as a kid, I watched the movies over and over, always looking for something I hadn’t noticed before in the storytelling,” she says. “Essentially, I wrote the book I wish I would have had during that time, when I was hungry to know everything I could learn about these characters.”

Skywalker: A Family at War, from DK Publishing, will be released on May 4, 2021.

Will you be ordering a copy for this series?