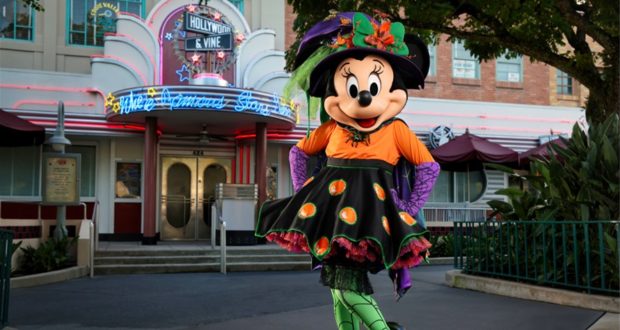 Frightfully fantastic news is coming out of Walt Disney World today – and we’re talking about all things Halloween! Yes, it may still be August, but at Disney it’s never too early to celebrate! In fact, this year’s all new Disney After Hours Boo Bash is kicking off tomorrow at Magic Kingdom. Halloween décor is making its way to all of the parks and Disney has unleashed some spooky Halloween merchandise. Coming off of the lengthy list of Halloween food offerings being released throughout Walt Disney World property, we’re also learning some Halloween-inspired news about a favorite restaurant at Disney’s Hollywood Studios!

With the turn of the season comes a new celebration with favorite Disney characters at Hollywood & Vine restaurant. Known as “Minnie’s Seasonal Dining”, lunch and dinner at Hollywood & Vine is always exciting as Minnie and friends know how to throw a fun dining party to match the season. Festive music, décor and tantalizing menu items – you just never know what this family-favorite restaurant has in store. Our favorite however is seeing the characters dressed to match the season! Even though Hollywood & Vine is no longer a buffet (now family-style), and the character dining is modified (sorry, no autographs or hugs) – we still can’t get enough of Minnie’s Seasonal Dining. And now, we know “Minnie Halloween Dine” is returning VERY soon!

As shared by Disney: “Another frightfully fun favorite is materializing at Disney’s Hollywood Studios with the return of Minnie’s Halloween Dine – beginning Aug. 10 until Nov. 3. A monster of a feast will be served to your table at Hollywood & Vine with Disney characters and friends making special appearances in costumes for the season!”

Don’t delay! Be sure to make those reservations as soon as possible as Hollywood & Vine is one that tends to fill up at the 60-day dining reservation window. If reservations aren’t currently available for your select date, you can always keep checking back as you just never know if a table will open up. Are you visiting Walt Disney World during this most spooktacular time? We’ll see you there, Disney fans!