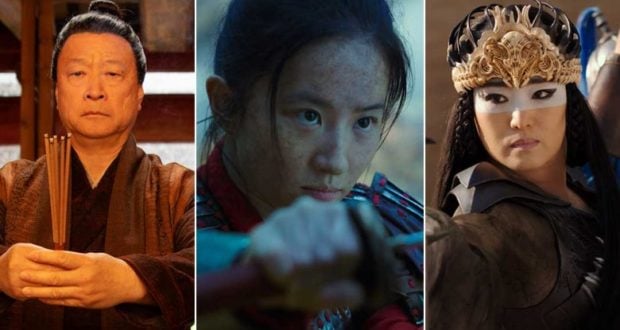 Meet the Characters of Disney’s Mulan

We’re only a few days away from the much-anticipated debut of Disney’s Mulan, a Disney+ Premier Access offering. Thanks to the D23.com Team, we have a chance to meet the characters we’ll see in this epic live-action adventure.

Mulan (Yifei Liu)
Much like the character in the beloved original animated film, Mulan is determined, strong, and compassionate. When each family has to provide one man to join the battle against the invaders, Mulan takes the place of her father, who suffers from an old war wound. At first she is totally out of her depth, but she learns fast and develops into a strong, powerful leader—forging new relationships along the way. On her approach to playing such an iconic character, Liu (The Forbidden Kingdom) explains, “Each day I allowed myself to forget who I am for the moment. You have to kind of lose yourself and not think about just how brave Mulan is. Yes, I am playing a hero, so we need to bring out that side, but I think every human being is complex—and complex is so beautiful. And that’s where the energy of the character is.”

Zhou (Tzi Ma)
Zhou is Mulan’s devoted father. Describing his character, Ma (24, Rush Hour) says, “Zhou is a former military man who went to war and was injured. When we meet him, it is years later, and he has a family—a wife and two girls. One girl, Mulan, has a spirit that’s very different from anyone else. Zhou tries to contain her spirit as much as he knows how. But it’s impossible, because you cannot contain that kind of a spirit. It’s a gift. And Zhou understands that, so you see Zhou always trying to straddle this line of containment but not refinement. Even when he’s heartbroken when she goes in his place, I think in his heart of hearts he knows she will come back and bring greatness.”

Commander Tung (Donnie Yen)
Commander Tung is the leader of the battalion in which Mulan winds up serving. Dignified and highly experienced on the battlefield, he acts as something of an adviser to Mulan. Says Yen, known recently for his turn in Rogue One: A Star Wars Story, “Tung is [Mulan’s] mentor, and she sees something in [him], not only his skill but also his wisdom… I enjoyed the scenes with the conversations between Mulan and Tung. Those are the more sentimental moments that reveal [his] inner vision and passion. You normally don’t see that because when he’s in his armor, he’s very strict and very military.”

Honghui (Yoson An)
Honghui is a fellow trainee soldier in the Imperial Army, who begins the film as Mulan’s competitor… but who ultimately becomes her friend. “Honghui is a young conscript,” An (Mortal Engines) explains, “just like all the other conscripts—but he has a military background. So his martial arts skills, compared to the other boys, are pretty much through the roof… I guess you could say that Mulan and Honghui start off on the wrong foot. But as they train together and live together in training camp, Honghui can see that there’s something different about Mulan, in comparison to the other boys. Because Commander Tung is very aware of what Mulan is doing all the time during the training process, Honghui feels like there must be something there that he’s not seeing. So, he makes amends, and it turns out that he’s right.”

Böri Khan (Jason Scott Lee)
Mulan’s adversary—and the Emperor’s nemesis—is Böri Khan, the embittered Rouran fighter from the North who will let nothing and no one get in the way of his determination to avenge the death of his father. Lee, most recently seen in Netflix’s Crouching Tiger, Hidden Dragon: Sword of Destiny, admits that he loves “the choices that the villain can make, and I like the heaviness and the weight that those characters carry. It’s fun to be singled out in black costuming. You really get a sense that he’s from a different world. He’s not of that China world that’s been created.” As producer Jason Reed explains, “They say a movie is only as good as its villain, so we knew that our invader from the North had to be scary, intimidating, and a real threat to the army and the Emperor. You have to believe this character is capable of taking down an entire empire at the height of its power.”

Xianniang (Gong Li)
Xianniang is a completely new character to the Mulan universe, and she’s a close ally of Böri Khan. Describing the mysterious character, executive producer Barrie Osborne explains, “Khan’s hidden weapon is Xianniang—who is a woman not unlike Mulan. She is physically fit and has the power of chi, an almost magical power, which gives you an incredible amount of strength. Xianniang gives Böri Khan an edge over the Chinese army.” “Xianniang is powerful, but the things that she wants are actually very simple,” adds Li (Memoirs of a Geisha, Shanghai). “She wants freedom and survival… Khan and Xianniang have a collaborative relationship. She knows the things he needs, and he knows what she wants… But they won’t reach their goals if they don’t cooperate with each other, so they formed a collaborative relationship.”

The Emperor (Jet Li)
International mega-star Jet Li dons the robs of the regal Emperor, and he was struck by the tone of the script: “It was very moving and very emotional to read, because Chinese people always believe in loyalty and filial devotion. It’s very difficult to do both well, but the Mulan story is very special. She shows both loyalty to her country and filial devotion to her parents. It’s a wonderful story because it is showing that a human can do both.” And there was no one better to play the role than Li, explains the film’s director Niki Caro: “He brings to the role of the Emperor all the gravitas that you would expect for the Son of Heaven—but he also brings tremendous heart and soul and action. So that when Jet Li’s Emperor leaves the throne to protect his people, you know it is going to go down.”

Look for Mulan when it begins streaming, with Premier Access, on Disney+ this Friday, September 4!

2020-09-02
Jamie Sylvester
Previous: First Steel Beam Placed for Disneyland’s Mickey & Minnie’s Runaway Railway With Delayed Reopening of 2023
Next: This is the day! New Episodes of “The Mandalorian” Start Streaming Oct. 30