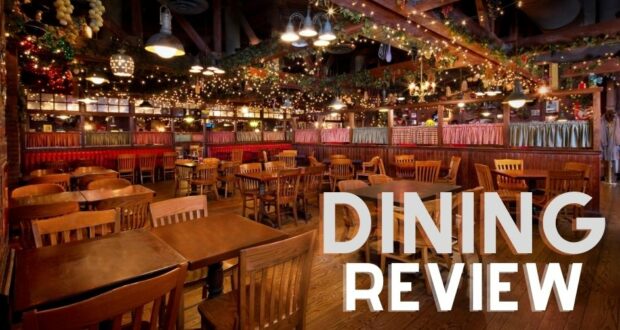 If you’re looking for Italian dishes at a Disney Park, Mama Melrose’s Ristorante Italiano at Disney’s Hollywood Studios might just be the perfect Disney dining experience for you!

Disney’s Hollywood Studios at Walt Disney World Resort seems like it has gone from a quiet Park to an especially crowded Disney Park over the past few years. With first the addition of Toy Story Land (June 2018), then Star Wars: Galaxy’s Edge (May 2019), it’s a flourishing Park, to say the least.

There aren’t many Disney’s Hollywood Studios table service restaurants including the popular Sci-Fi Dine-In Theater Restaurant, 50s Prime Time Cafe, Hollywood & Vine, The Hollywood Brown Derby, and Mama Melrose’s. Because of the Park’s popularity, dining can be a pickle! With crowds comes the utmost importance of snagging advance dining reservations 60-days prior to your Park visit.

Of the lineup of Disney’s Hollywood Studios restaurants, Mama Melrose’s typically is the easiest to get a reservation for. The several tables and hidden location of the restaurant off Grand Avenue near the exit of Muppet Vision 3D likely make it an easy one to forget about.

Tucked away in the corner of Grand Avenue you’ll spot a sweet Italian restaurant welcoming Guests with its cozy dining space and delicious lunch and dinner Italian fare. The intimate tables and booths with checked curtains and lights strung across the ceiling make for a cute atmosphere.

The lunch and dinner menus are inspired by Mama Melrose! The story goes:

“Once upon a time, a young girl from a small Sicilian village moved to Hollywood to become a star. However, she soon found that cooking was her true calling as she re-created her papa’s secret recipes for her starving actor friends. At their urging, she opened a restaurant in a vacant backlot warehouse once used to store film equipment. Mama’s culinary talents soon attracted the patronage of film industry insiders, who dubbed her Mama Melrose, after the lively Los Angeles thoroughfare. Her establishment became known as the place “where Italy meets California in the heart of the Backlot,” and the rest, as they say, is history.”

Knowing the story makes the dining experience all the sweeter! For our visit in March, we were texted that our table was ready shortly after we checked in. We found the restaurant to be bustling with all of the tables full and Guests waiting at the door to get in.

While we don’t normally dine at Mama Melrose for lunch because we feel like it can be a heavy meal for the middle of the day in a hot Park, we were thrilled to have a seat and enjoy the air-conditioning as a way to regroup away from the Park crowds.

Our server was on her toes bringing us plenty of drinks and bread for the table. We couldn’t resist the pasta and pizza choices and dove in fork first!

We chose the Shrimp Campanelle which is sautéed shrimp and Campanelle pasta tossed in a four-cheese sauce with cauliflower, sun-dried tomatoes, fresh spinach, and sweet onions. It was absolutely delicious! Despite our attempt, we couldn’t eat the full dish as it was a heavy one.

We also tried Mama’s Italian Pasta which we chose to enjoy with marinara sauce. The spaghetti was yummy as we would suspect from an Italian restaurant.

With a Celiac allergy in the dining party, the server was extra cautious and aware of cross-contamination. Disney Chefs are also readily available for any allergy questions, but our server was fully capable to handle the food allergy for us. We ordered the gluten-free cheese pizza which was fantastic with an excellent gluten-free crust which is hard to come by.

Lastly, we ordered the regular cheese pizza off the kid’s menu for the young one in our dining party. That was gobbled up in no time!

Mama Melrose also serves a vast list of beers and wines, along with plenty of desserts and appetizers. Our only issue was the fact that we knew we were going back out into the heat to ride more rides. Our stomachs were too full to dig in for dessert this time around.

Overall, we will definitely be back to dine at Mama Melrose’s. This Disney’s Hollywood Studios restaurant isn’t our first choice, but we do enjoy that usually, you can snag a walk-up waitlist or last-minute reservation here. Plus, if you’re a pasta/pizza lover, this is one restaurant that will satisfy that Italian food craving.