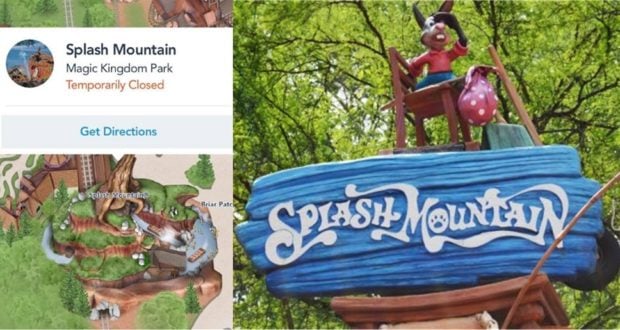 There’s a lot of buzz happening right now amidst Disney fans as Splash Mountain at Walt Disney World’s Magic Kingdom is still listed as “Temporarily Closed” for the third day in a row.

The popular attraction was first noted on the MyDisneyExperience App as being “Temporarily Closed” on Sunday, July 26th. Hiccups happens, rides close temporarily… no big deal, right? Well, we are now on day three of the temporary closure and Disney fans are starting to panic.

The fear for many is having that one last time to ride Splash Mountain before it is re-themed to a The Princess and the Frog theme as we shared here when Disney first made the announcement. There is however no announced date for the remodeling to begin.

The panic heightened when Magic Kingdom guests reported Splash Mountain’s water was drained. There are other reports however of guests seeing maintenance members working on the popular attraction.

We could be completely wrong, but we suspect this is just a temporary closure as Disney notes on the MyDisneyExperience App. We suspect that much like when Disney first announced the re-theming of Spaceship Earth prior to the project being put on hold, Disney fans were given a closure date of the attraction as it currently stands. As popular as Splash Mountain is, we seriously doubt Disney is going to pull the rug out with an unexpected closure.

We’ll keep you posted as we learn more about the beloved Splash Mountain!

2020-07-28
Jamie Sylvester
Previous: Disney’s “Where Can You See This?” Disney Vacation Club Edition
Next: Disney’s Tables In Wonderland Members Receive an Additional 4 Months Beyond Date of Expiration