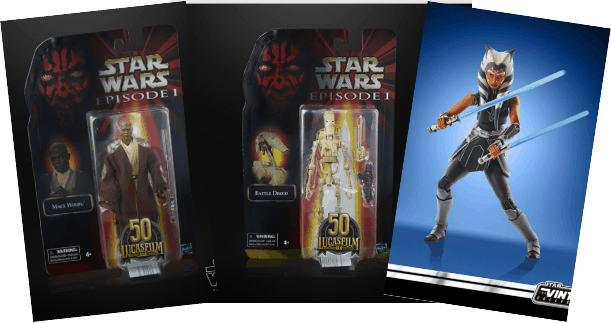 The action figure and toy masters Hasbro Pulse revealed special products celebrating Lucasfilm’s 50th anniversary. It doesn’t matter which ear of Star Wars is your favorite, this release makes it clear that Hasbro has you covered.

The Star Wars The Black Series will include the Battle Droid, Mace Windu, Qui-Gon Jinn, and Jar Jar Binks, all in Episode I-inspired packaging.

Star Wars The Vintage Collection several highlights from the 1996 Kenner line will return as part of the Lucasfilm 50th anniversary celebration in spring 2021, including the AT-ST Driver, Paploo the Ewok, and Princess Leia in Endor fatigues.

Some icons of animation and a trooper from the upcoming Star Wars: The Bad Batch will also be getting the action-figure treatment in spring 2021, as Ahsoka Tano and Maul (based on their Mandalore looks from Star Wars: The Clone Wars‘ final season) join The Vintage Collection, while the Elite Squad Trooper will come to life in The Black Series.

And finally, Hasbro will pay tribute to the very first Star Wars toys with some classic 6-inch Black Series figures, repainted Kenner-style, along with Kenner-inspired packaging that features the Lucasfilm 50th anniversary logo. First revealed via IGN, the figures in this series include Greedo, Jawa, and Obi-Wan Kenobi, all arriving spring 2021.

Get ready Star Wars fans because you are going to be busy this spring as you gather all your favorites.