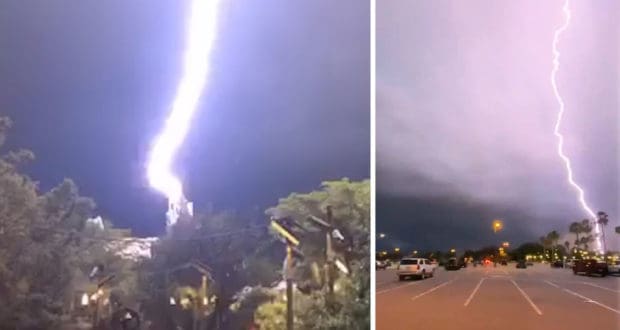 Lightning Strike Near Disney’s Star Wars: Galaxy’s Edge Rumored to Be Reason Rise of Resistance Attraction Is Down

The internet is buzzing with footage and news of a lightning strike that took place on Monday evening (August 10), striking close to Walt Disney World’s Star Wars: Galaxy’s Edge land in Disney’s Hollywood Studios. Today, the park’s most popular attraction, Star Wars: Rise of Resistance, has been closed. Rumors are circulating this is due to the lightning strike.

Videos can be seen of the lightning strike on ABC News Twitter:

ABC13 shares, “Park-goers at Walt Disney World captured striking footage of lightning at the Florida theme park on Monday evening. Austin Coppock, who posted video of the lightning to social media, said he saw the lightning near the Millennium Falcon and marketplace in Galaxy’s Edge, the Star Wars-themed area within Disney’s Hollywood Studios.”

While there are no immediate reports of damage to the park from the lightning, the park’s most popular attraction, Star Wars: Rise of the Resistance has remained closed today as listed on the MyDisneyExperience App.

Another attraction in that area listed on the MyDisneyExperience App as “temporarily closed” is Muppet*Vision 3D.

With both of these attractions, that were in the strike area, being closed for the full duration of the day, social media is buzzing with discussion that maybe last night’s lightning is the cause for the closures. Disney has yet to announce if there is any correlation between the two.