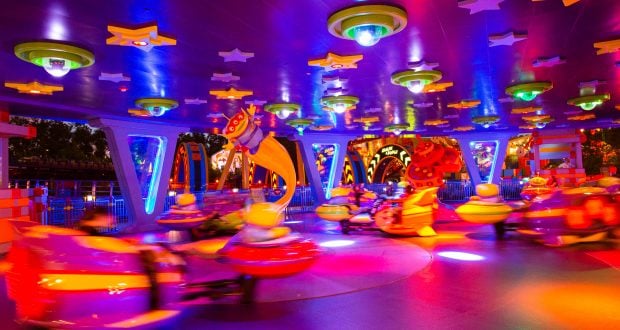 Walt Disney World has some seriously awesome attractions. And a lot of them are spinning! Whether you’re a daredevil, or get queasy just thinking about it, there are spinning rides for everyone. Which ones are right for you?

I think Mad Tea Party might be the pinnacle spinning ride at Disney World. This classic Magic Kingdom attraction was modeled after the 1955 version in Disneyland and has always been a fan-favorite. A great part about this ride is that even if you don’t love spinning, the rider can control the spin! So you can either go crazy and leave super dizzy, or you can just kind of enjoy a leisurely ride. This fun attraction in Toy Story Land is an intergalactic joyride! On a massive spinning floor, two person cars get whipped around the area to go along with the music. It’s less of a swirl and more of a catapult around corners. It’s fun without being too crazy.

Ah, Dumbo. This was always my first pick when I was little. Dumbo is a classic. Although it’s location and queue has changed over the years, its grace and simplicity have stayed constant. Guests board the Dumbo cars and can control how high or low they fly, as they gently go round and round through the Fantasyland sky. 4. The Magic Carpets of Aladdin

This ride is very similar to the previous. The difference is that guests soar on a magic carpet through Agrabah in Adventureland. The front row of the carpet controls the power to fly high or low, while the back row can tip it forward and backwards!

Much like Dumbo and Magic Carpets, TriceraTop Spin is a slow moving, high riding attraction. This one is in DinoLand in Animal Kingdom. The controls are exactly the same as Magic Carpets: front controls height, back controls tipping. This is a great addition to Animal Kingdom for little ones.

Astro Orbiter is Dumbo for big kids. Guests get launched into the air in this fun Tomorrowland spinning ride. Like Dumbo, it’s slow moving and guests can control the height. The difference is the ride goes much higher. Astro Orbiter is best experienced at night, so guests can see all of Magic Kingdom lit up! This carousel is so magical. Seated right in the center of Fantasyland, it overlooks Cinderella Castle with gorgeous views – again and again and again. The uniqueness of this ride comes from its history. Built in 1917, each horse is wood-carved, gorgeous, and makes guests feel like they’re a part of Prince Charming’s court!

To Infinity…Spinning Beyond! Buzz Lightyear’s Space Ranger Spin is a classic. The ride itself isn’t spinning, but the car is. Guests can control their vehicle with a joystick between the blasters. This allows the car to swivel (rather choppily actually) so guests can shoot targets more easily.

Similarly, Toy Story Mania! in Toy Story Land is not in itself a spinning ride, rather the car spins around corners to position guests in front of the next game. The phenomenon is similar to Alien Swirling Saucers in that the car almost whips around corners. As a whole, this ride is slow and tame. This ride is not for the faint of heart! But at least spinning shouldn’t be the biggest issue. Kali River Rapids in Animal Kingdom is a whitewater adventure that carries guests through the jungle, down waterfalls, and past geysers. This ride is mildly intense, but the spinning is sort of random. The raft is free floating (within the Disney track bounds, that is), so it is likely to spin. But not enough to get dizzy!

Could this be the ultimate spin? The kind that doesn’t even register as spinning? Mission Space is a simulator ride in Epcot. The Orange version – also known as the intense version – is all about spinning. In the Orange mission, the compartment literally spins and tilts fast enough to simulate a G-force launch. There are warnings all over for this version, so choose wisely!