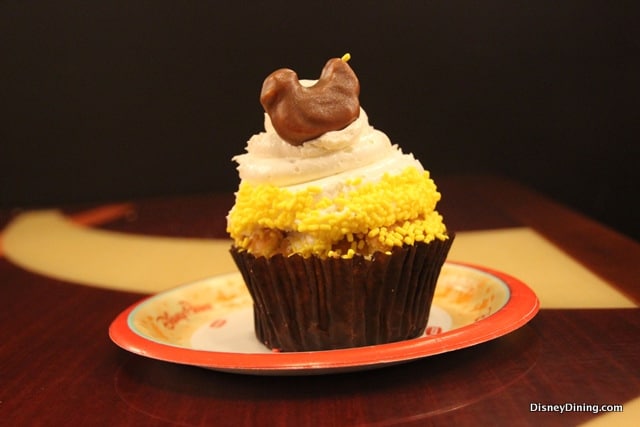 Following with our theme of resort cupcakes (see the Epcot Cupcake walk) my family recently spent an evening touring the Magic Kingdom resorts and sampling their cupcake varieties. There are several different ways you could do a Magic Kingdom Resort Cupcake sampling, but we chose to visit 4 of the resorts: Wilderness Lodge, The Contemporary Resort, The Polynesian, and The Grand Floridian. All of the Magic Kingdom resorts are beautiful to visit with great theming and plenty to see and do—eating cupcakes is just a good excuse to see them all and to get yourself fueled up for the touring.

For this voyage we started out by driving to the Wilderness Lodge. Since we were staying onsite the attendant at the gate let us in with our resort parking pass in the windshield and showing an ID. Your mileage may vary depending on the cast member on duty. We didn’t feel we were abusing parking here since we were buying cupcakes in their food court.

If you do not have a car you can get to the resorts fairly easily by taking your resort bus to the Magic Kingdom. From there you have a variety of transportation options to the resorts depending on where you want to begin. I would recommend starting at Wilderness Lodge if you are trying to conquer all four resorts—to get here you can take bus, but the boat trip over is much more pleasant. If you only want to try the monorail resorts you can walk or take the monorail to the Contemporary Resort to begin there.

Now, on with the cupcakes! The Gourmet, or Specialty Cupcakes are $3.99 (plus tax), or a snack credit if you are on one of the Disney Dining Plans.

The Wilderness Lodge is themed to the Pacific Northwest with a breathtaking lobby, lush landscaping, creeks, and even a working geyser. This resort should be on everyone’s must-see list for all of the details. If you have time during your visit stop by the concierge desk and ask for a Hidden Mickey hunt worksheet.

At Wilderness Lodge the cupcakes are sold in the food court “Roaring Forks.” Roaring Forks can be found by walking to the back of the lobby and following the ramp down on the right. On this evening they had four varieties to choose: Chocolate Caramel, Vanilla, Carrot Cake & S’more. Here they are sold at room temperature from the self-serve bakery. You can request one of the nifty plastic to-go containers to protect your cupcake if you would like. We chose the S’more cupcake as I was trying to choose flavors that fit the theme of the resort we were visiting.

The S’more cupcake really wasn’t what I anticipated. I thought it would be mostly chocolate, but it wasn’t. It was a very dense, graham cracker flavored cupcake with a light and fluffy toasted marshmallow frosting. It was topped with a Hershey’s chocolate rectangle. If there had been a gooey chocolaty filling (think melted S’mores) it would’ve been much better. At first I thought the cake was only the graham flavor, but on my last bite there was some chocolate mixed in—I guess it is the luck of the draw for chocolate placement in your cupcake. I would give this cupcake 3 out of 5 stars.

To eat your cupcake there is some non-descript indoor seating at Roaring Forks, or you can go outside and take in the natural and architectural beauty of the Lodge while enjoying your treat.

The Contemporary Resort is one of the original Walt Disney World Resort hotels. In the Grand Canyon Concourse you can see a mural by Disney artist Mary Blair (look for the five-legged goat), shop at the resort shops, and watch the monorail glide by overhead. Out on the observation deck you can check out a new angle on the Magic Kingdom.

At the Contemporary we visited the Contempo Café, adjacent to Chef Mickey’s on the 4th floor (you’ll have to go upstairs if you took the boat from the Wilderness Lodge or walked from Magic Kingdom, or down from the monorail station if you chose that route). I had high hopes for the cupcakes here. Last summer we enjoyed a couple of fantastic varieties here. As with the Wilderness Lodge, the cupcakes here are sold in the self-serve bakery counter. There wasn’t a “contemporary” themed cupcake per se (but what would that be really?), so we selected the Pineapple Rum Cupcake (sounded yummy, but more like the Poly to me). One cupcake caution—because of the construction method for these filled cupcakes they can be a little precarious to retrieve from the shelf and to carry (hence the plastic to-go containers). This one started falling apart as soon as I touched it.

The Pineapple Rum Cupcake was yellow cake with buttercream icing topped with what I think is a chocolate covered marshmallow and yellow sprinkles. I didn’t detect any rum flavor to either the cake or the icing, but they were both tasty and a good texture. Inside was a pineapple filling (that could’ve had some rum to it) made up of shredded pineapple. The cupcake overall was moist and very good. I give it 4.5 out of 5 stars.

Seating at the Contempo Café, although a bit loud, offers fun views of the monorail going by overhead.

From the Contemporary we hopped on the monorail to the Polynesian. A monorail ride should be part of every Walt Disney World vacation (Por favor mantengase alejado de las puertas). The Polynesian is the other original resort with a South Seas feel. The lobby is complete with a waterfall and tropical vegetation. I think this is one of the most picturesque resorts on property, and you can’t beat the location for a view of the Magic Kingdom and Cinderella Castle from the beach.

Cupcakes at the Polynesian are available at the self-serve bakery at Captain Cook’s located in the Great Ceremonial House (go downstairs from the monorail stations and walk through the lobby and take a left by the Bou-Tiki Shop). There were several fun flavors and decorations here—a seasonal Easter cupcake, a Minnie Mouse bon-bon type cupcake, and the Peanut Butter and Jelly cupcake. Although the Minnie Mouse cupcake was extremely tempting we went with the PB&J because it was so different from anything else we had eaten so far, even though none of these really fit the Poly “theme.”

The PB&J cupcake was a peanut butter flavored cake filled with grape jelly and topped with white frosting and peanut butter chips. The cake itself was denser than a vanilla cake, but I liked the texture. The jelly filling was well distributed and the icing and peanut butter chips worked well with the overall theme of the cupcake. I give this one 5 out of 5 stars for flavor, texture, and originality. It was my favorite of our little “voyage.”

Captain Cook’s offers several seating options to eat your cupcake. There are tables and chairs inside and outside; somewhat limited inside and watch out for attack birds if you are eating outside during the day. Your best option here is to carry your cupcake down to the beach and enjoy it there while gazing at Cinderella Castle across the Seven Seas Lagoon. Triple points for going at night and watching the Electrical Water Pageant and Wishes while eating your cupcake.

Our final stop was The Grand Floridian resort. We chose to walk the path between the Polynesian and the Grand Floridian to enjoy the nice evening and to work off some of our cupcake calories. You can also take the short monorail ride over. The Grand Floridian is the flagship resort with Victorian theming and lots of grandeur. The lobby is beautiful with some shopping opportunities (including a Basin store), and entertainment too.

After enjoying the band in the lobby for a few minutes we walked around outside and over to Gasparilla Island Grill (you need to go down to the main level if you took the monorail over). This is the most difficult location to find—you walk through the lobby and over to the left exiting at The Grand Floridian Café. From there you continue around to the left toward the marina where Gasparilla Island Grill is located.

Unlike the other Magic Kingdom resorts the cupcakes here are sold in the refrigerated section. These cupcakes were definitely the prettiest of all that we saw on our Magic Kingdom Cupcake Voyage. There were several gourmet choices: S’mores (that looked better than the Wilderness Lodge version), Pina Colada (should’ve been at the Poly), German Chocolate, and Cherry-Berry. Unfortunately at this point we were unable to consume any more cupcakes. Even splitting these monsters four ways we were done. My advice: bring more people, or cut your voyage down to three stops doing only the monorail resorts. If we had been able to eat more we would’ve selected the Cherry-Berry cupcake since it was the most different from our previous choices. But I also want to try the S’mores cupcake to compare to the Wilderness Lodge version.

Seating at Gasparilla Grill is mostly outside. This affords you a beautiful view of the marina and Cinderella Castle.

Although we were thoroughly stuffed and on a complete sugar high from our Cupcake Voyage (not just a walk since we took a car, boat, monorail & walked), it was a great way to visit and experience the deluxe Magic Kingdom resorts and add a fun element for my kids. My 9-year-old son loved going in to choose the right cupcake for each location and help me stage the photos. I challenge each of you to a cupcake walk/crawl/voyage on your next Walt Disney World vacation!

Now, I need your help. We are returning to the World in June and we need a new cupcake challenge. What should it be? The parks? Downtown Disney?

Note: Cross section photos were taken on a different day so that lighting would be better to see the fillings. 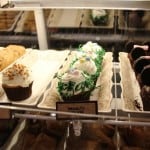 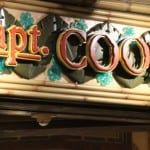 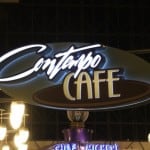 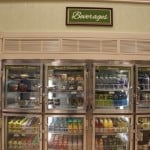 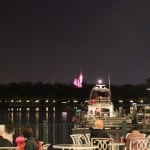 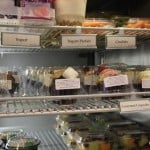 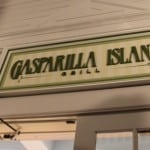 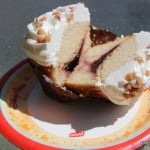 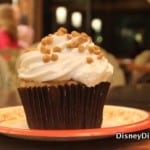 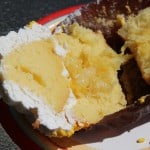 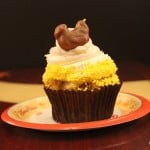 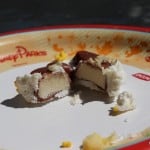 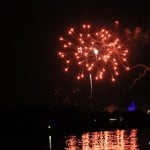 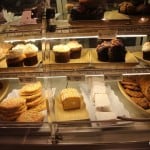 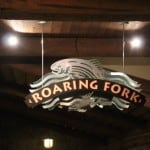 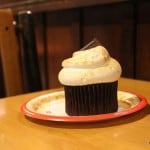 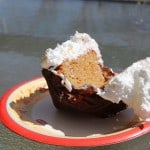