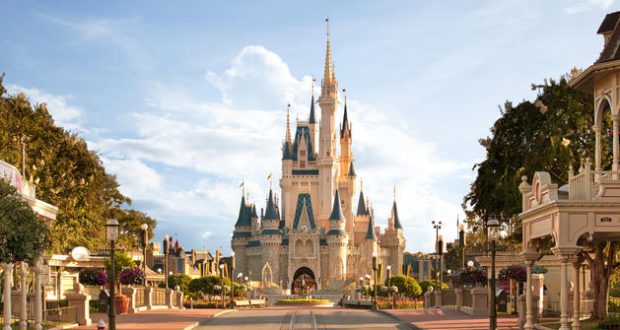 Let The Magic Begin! Details On The Debut Of The New Welcome Show at the Magic Kingdom

A new welcome show was recently rolled out at the Magic Kingdom. You may previously recall watching the old welcome show just outside of the park gates to begin your day. This show included your favorite characters riding in on the Walt Disney World steam train. In addition, a family of the day was selected to help open the park with the mayor. Then, it was a rush down Main Street as guests jockeyed for position toward the headline attractions. All of that has now changed.

I decided to drive over to the Magic Kingdom for the very first day of this new welcome show. If you have been wondering about all the recent changes, then you are in luck because we are going provide you the details so you can plan your next rope drop at the Magic Kingdom!

Everything seemed to be usual upon arriving at the Magic Kingdom that morning. We went through bag check and the metal detectors before finally scanning our fingers for park entry. The first thing we noticed was it was much less congested after going through the security check point. This is because the gates now open at least one hour before the official scheduled opening. No more squeezing in front of the Main Street Railroad with thousands of your closest friends.

Instead, guests casually walked through the tunnels into the Town Square for a more leisurely stroll down Main Street. It was evident that this change took many people by surprise. In fact, one guest stopped me to ask some questions. After chatting for a few minutes I figured out he did not even realize he was already inside the park! It was a little difficult to explain to a first-time guest how the gates were open but the park was not.

For those who enjoy getting their photo taken along Main Street this is your golden opportunity as PhotoPass photographers are on hand with little to no wait! In addition, fewer people in the park means less people will show up in the background of your pictures! Plus, you don’t have to use valuable park time getting those photos taken since technically the rides and attractions have not yet opened! Other places on Main Street are open too, including the Starbucks where a handful of people were getting a cup of coffee.

Because the hub is such a large area, the waiting time for the show to begin felt much less crowded and was definitely more relaxed. It should be noted that, at this point, guests really need to decide what is important to them. There are many great viewing spots to see the new show, Let The Magic Begin. But, if you also want to be one of the first ones into one of the themed lands, you cannot have both. In fact, those closest to the rope to enter Fantasyland have either an obstructed view or no view at all of the castle stage. Decide wisely ahead of time where you want to stand.

At 8:55AM music began to introduce one of the Royal Majesty Maker’s who opened the show. After a brief welcome, the one and only Mickey Mouse takes the stage to say a few words followed by an appearance from a number of characters. On this day Aladdin, Jasmine, the Evil Step Sisters, Tiana, Merida, Elena, Belle, Mary Poppins, Snow White, Rapunzel, Alice, Chip ’n’ Dale, Pluto, and Minnie Mouse took the stage. This makes for a great photo op! It is possible like the previous show that these characters could rotate.

After Mickey mentions he needs a little magic, we get a balcony appearance from the Fairy Godmother. Mickey then puts in his request to help kick of the magical day, and the Fairy Godmother has everyone repeat bibbidi bobbidi boo! With that, fireworks go off and the entrances to the lands are opened. The characters linger for just a few moments while waving to the crowd before disappearing into the castle.

By this time, guests are flooding the walkways to the various lands as the hub begins to empty and new guests are just beginning to arrive via Main Street. While there is still a sense of urgency to get to your first destination, the scene is less chaotic than in times past.

After taking in this new show, chatter from most repeat guests was that it while it was fun and cute, it seemed to lack the excitement and momentum the previous show offered. Nothing seems to compare to watching the steam train pull into the station while singing zip-a-dee-doo-dah, zip-a-dee-ay! Also, there is no family selected to help open up the Magic Kingdom and there is no singing or dancing at all.

Here are a few tips for making the most out of this new experience:

Have you seen the new welcome show, Let The Magic Begin yet? If you have, share your experience with us. If you haven’t seen it yet, what are you looking forward to the most? Leave your comments below!

2017-01-13
Tim Forgette
Previous: Magic Kingdom Cabana Rentals at Walt Disney World Will be No More
Next: 10 Do’s & Don’ts Of The Disney Dining Plan