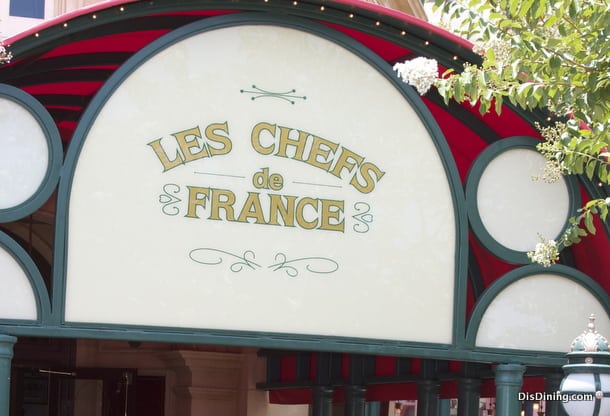 There are many places to eat when visiting Epcot, especially around the world showcase. One of the most charming places is Les Chefs de France. The food is average but the atmosphere and service is worth a visit.

We made a reservation for 4:30 on a Monday afternoon. We checked in 5 minutes early and we were seated promptly at 4:30. Our table was right next to the window overlooking people walking by and a street performance. We were both thrilled with our table location. Our server’s name was Bentoin from Lyon, France and he was everything you could hope for in a server. He was nice, knowledgeable and adorable. He told us a little bit about where he was from in France, made some suggestions and left us to decide.

I decided to first try a French beer. When Bentoin returned with my Kronenburg 1664 he explained to me that it is the most popular beer in France because it is the only widely produced one in the country. Also, he told me that it is similar to German beers because it is made close to the France-Germany border. My friend ordered a whisky and ginger-ale. Just FYI, don’t expect a lengthy list of liquor choices here.

One of the options for dinner was a 3 course meal for $39.99, including a soup or salad, entrée and a dessert. We decided that we would share this meal and add another soup because we couldn’t decide between French onion and lobster bisque. The soups were both delicious. If you like either one, you will not be disappointed. The French onion is one of the best I’ve ever had.

Next, for our entrée, we chose the beef short ribs braised in Cabernet with pasta, pearl onions and mushrooms.  Our server explained to us the history of the dish and told us that the meat was cooked for at least 4 hours. It was okay. My first thought was pot roast meets beef stroganoff. The meat was very tender so I couldn’t help but eat all of mine.

For dessert we chose the crème brulee. I didn’t like the presentation but it tasted okay. I have definitely had better crème brulee but that didn’t stop us from eating it entirely. With my dessert I had a cappuccino which was as it should be. The only complaint I have was the timing of our dishes. I felt sort of rushed and didn’t think there was enough time between each dish.

One of my favorite parts of this experience was “meeting the chef.” There is a small Ratatouille that comes out to visit each table accompanied by a host. It seems to be a dish at first but when the lid is lifted there is the “little chef.” The host and Ratatouille engage in conversation with you for a few minutes asking where you are from and recommending “extra dessert.” It’s great for everyone, especially kids.

T-Tips – Go here if you would like a more intimate experience while dining in the park.

I work as a server and a writer in Orlando. I enjoy food very much. Breakfast, lunch and dinner bring people together everyday. Dining in unique atmospheres is always fun but if the food is good than I'll have fun anywhere! I have a hard time picking a favorite type of cuisine but lately I've been having lots of Asian foods. My other hobbies include yoga, reading, shopping, being outdoors and anything art related. I've recently discovered my love for yoga. It feeds my mind, body and spirit. I also love to read. My most recent favorites are The Hunger Games and The Night Circus. Kayleigh can be reached at kaleigh@disdining.com 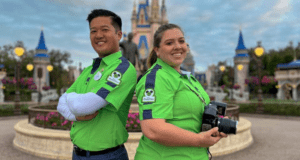