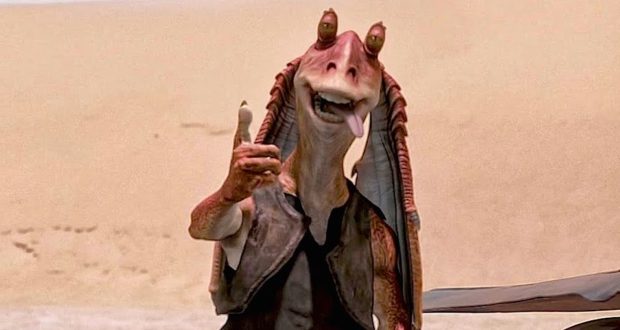 Love ’em or hate ’em- either way Jar-Jar Binks will be back in the new Obi-Wan series coming to Disney+.

The confirmation of the Obi-Wan series on Disney+ led to a lot of excitement as it fills some missing chapters in the original timeline of Star Wars with events happening 10 years after Star Wars: Revenge of the Sith and about a few years before Rogue One: A Star Wars Story.

A controversial character will reportedly be back according to editor Jason Ward.

Jar Jar Binks is going to be back and he would be crossing the path with Kenobi where Jar Jar would be bearded as he reflects on the events that happened to him and his life since the deception which ushered the first Galactic Empire. Early CGI work has been made for Gungan’s return to Star Wars.

There would also be a part of the story where bearded Jar Jar and Obi-Wan would take a trip down to memory lane and discuss the past.

With Jar Jar’s return, the Obi-Wan series can delve into various storytelling possibilities as it would be interesting to see the reaction of Obi-Wan and Jar Jar to the fall of Anakin or they could have something or anything related to Anakin and Padme’s kids.

Since the Obi-Wan series is still in the pre-production phase, there are still a lot of possibilities that could happen as Lucasfilm neither confirms nor denies the reports.

With the filming set in March 2021 and following the trend of the release date of other Star Wars shows like The Mandalorian 2 getting released about a year after the filming, the Obi-Wan series could be released March 2022 as the earliest.

How do you feel about Jar-Jar coming back?