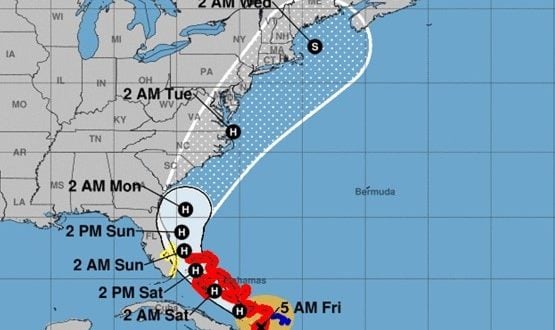 Well, it looks like Tropical Storm Isaias is now a hurricane and is approaching Florida by Saturday. Here’s the latest update for Florida residents and Walt Disney World travelers!

As shared by the OrlandoSentinel: As of 5 a.m. Friday, the storm was a Category 1 hurricane with 80 mph winds moving northwest at 17 mph and located 15 miles south-southwest of Great Inagua Island in the the southern Bahamas and 385 miles southeast of Nassau.

Isaias is expected to slow its forward motion today while moving over the southern and central Bahamas before approaching near the Florida coast on Saturday and Sunday. The forecast track now sticks the center of the storm about 50 miles off the coast of Port St. Lucie at 2 a.m. Sunday with projected sustained winds of 85 mph and higher gusts at its closest approach to Florida.

“There is a risk of impacts from winds, heavy rainfall, and storm surge this weekend along the Florida east coast and spreading northward along the remainder of the U.S. east coast through early next week,” the NHC said, though Isaias’ track and intensity forecast remain uncertain.

Fox 35 meteorologist Glenn Richards said Thursday the track trend is “good so far” as it heads east. He said current models show the storm about 100 miles off Cape Canaveral early Sunday and should be far enough away to avoid sustained tropical storm winds albeit with some gusts, especially in east Orlando and along the state’s east coast. But, as always, that could change.

“If the models fluctuate even 50 miles or 70 miles back to the west, it would bring tropical storm winds and possible damage,” he said.