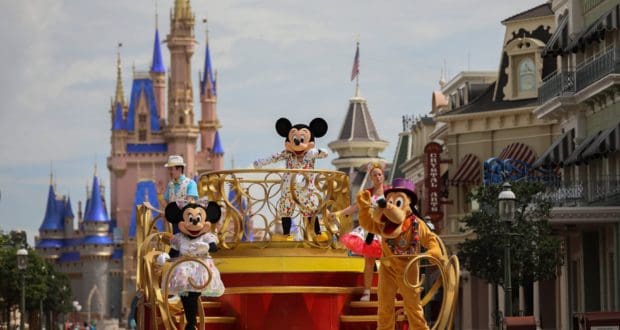 A lot of experiences have been modified and adjusted since Walt Disney World reopened in July 2020.  One of those big adjustments has been character interactions.  To help keep our beloved princesses, Mickey and friends as well as guests safe, Disney has modified how guests can see their favorite characters right now in Walt Disney World.  Here is how you can get your character fix during your next trip to Walt Disney World during this phased opening.

At each of the four main parks, guests can enjoy mini parades of characters.  These cavalcades are a great way for guests to see their favorite characters without having to wait in long lines or save a spot for a parade.

Another great way to get a character fix while visiting Walt Disney World is by keeping eyes and ears opened for pop-up characters in the parks.  In each of the four parks, it seems like random characters can be seen throughout the parks greeting and bring magic to guests.  A favorite of ours is seeing Joy and Winnie the Pooh in Epcot at the Imagination Lawn.  This interaction has been a favorite to see and a truly magical experience.  In the Magic Kingdom, look for characters to show up at the train station or in Star Wars Galaxy Edge look for Stormtroopers to be watching for Rebels.  These fun pop-up character spots are some of the most truly genuine interactions right now in Disney when it comes to the characters and we absolutely love them.

Typical character dining right now is not being offered throughout Disney property.  This doesn’t mean that there isn’t any character dining, but just that the experience had been slightly modified.  Guests wanting to see Mickey and friends have a few options still to see them while enjoying some food.

Character interactions have been adjusted during the phased reopening of Walt Disney World in order to keep everyone safe, but there are still great ways to get your character fix while visiting.  From the cavalcades to character dining, guests can enjoy seeing their favorite princesses and the main mouse himself during their vacation.