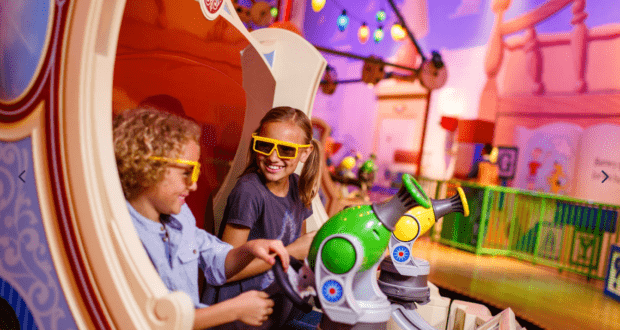 Have You Noticed These Details on Toy Story Mania?

Disney’s Hollywood Studios at the Walt Disney World Resort is home to many wonderful attractions that completely immerse Guests in worlds from some of their favorite films and television shows. Toy Story Land is a fantastic location in the Park where Guests can shrink down to the size of toys and play with Woody, Buzz, Jessie, Bo Peep, and other favorite characters from the Toy Story films on incredible attractions, including Slinky Dog Dash and Alien Swirling Saucers. 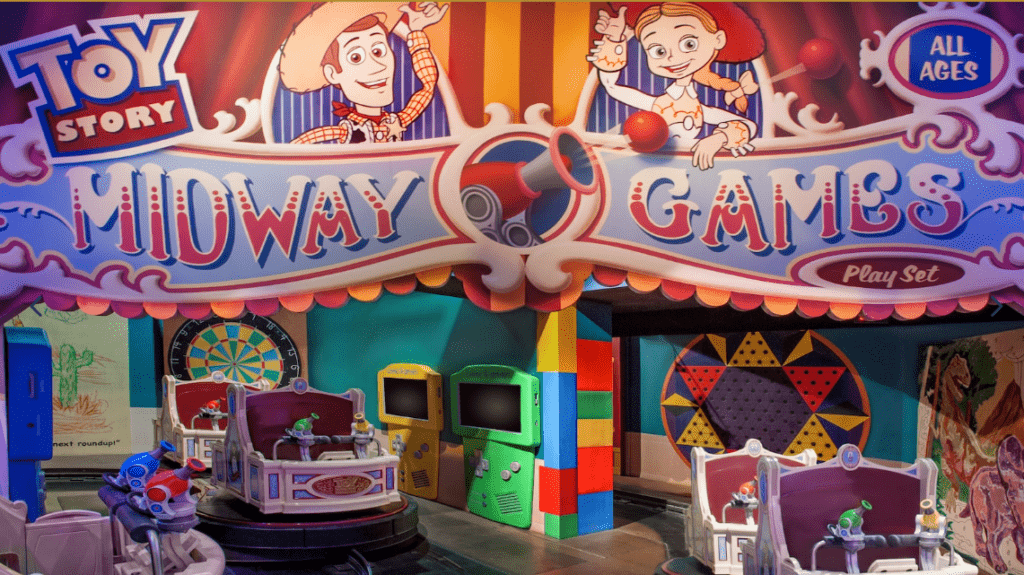 Toy Story Mania is the original attraction found in Toy Story Land that originally opened in Disney’s Hollywood Studios in 2008 in what was formerly Pixar Place. While the attraction has remained the same, major construction was done to move the main entrance upon the opening of Toy Story Land in 2018. 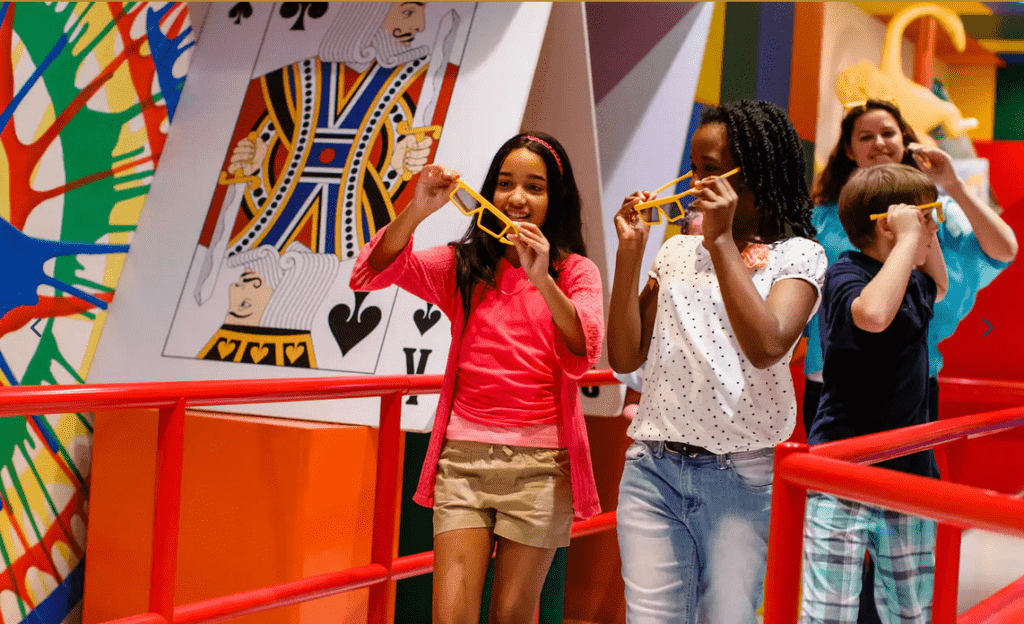 Beloved by many Guests, Toy Story Mania is a fun and competitive experience that brings Guests into a vibrant and colorful queue where they are surrounded by favorite childhood toys and games. Once on board the attraction itself, Guests compete in a series of 3D midway games hosted by their favorite characters where they take aim at targets and try to score the highest in their vehicle. 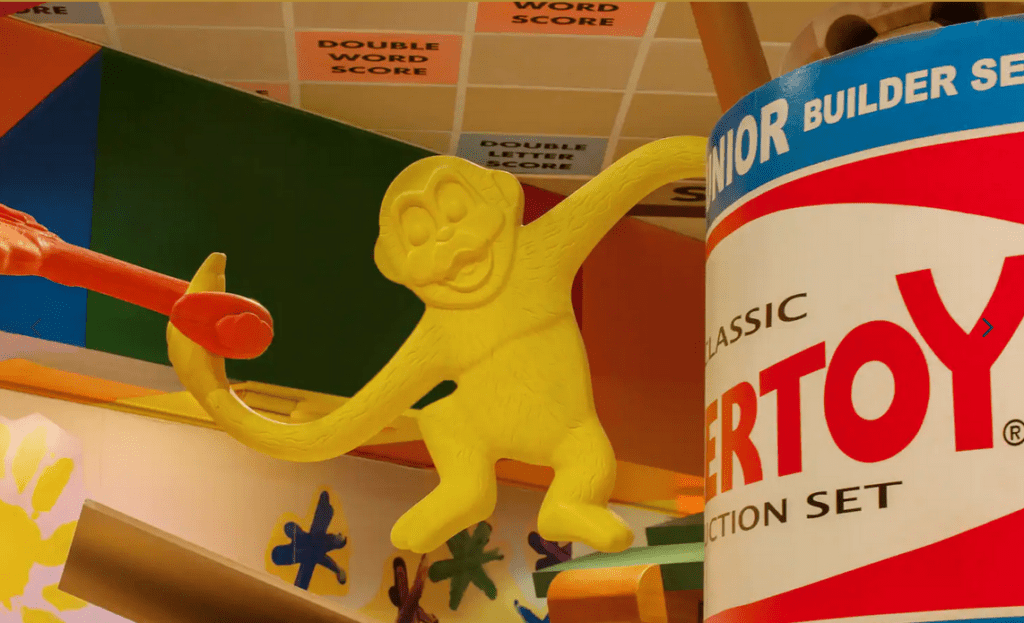 Each midway game is filled with fun surprises and happenings, and between each round, the vehicles whirl around, showcasing some more wonderful theming and nods to the films and classic toys. Overall, it’s a fun and entertaining attraction that many Guests consider to be a must-do in Disney’s Hollywood Studios at the Walt Disney World Resort. 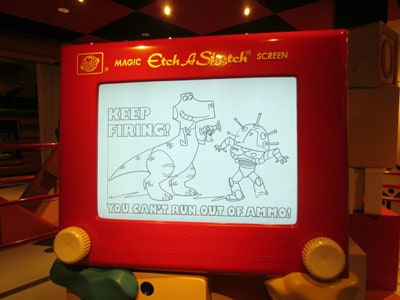 While winding their way through the wonderful queue on Toy Story Mania, Guests can spot childhood favorites used in inventive ways, including Lincoln Logs, crayons, playing cards, Chutes and Ladders, Checkers, Tinker Toys, and more. One room of the queue features a large Etch A Sketch that continually changes as Guests pass by, and the different images that are created feature helpful tips for the game ahead, as well as fun word puzzles where Guests have to piece together clues to figure out phrases from the Toy Story films. 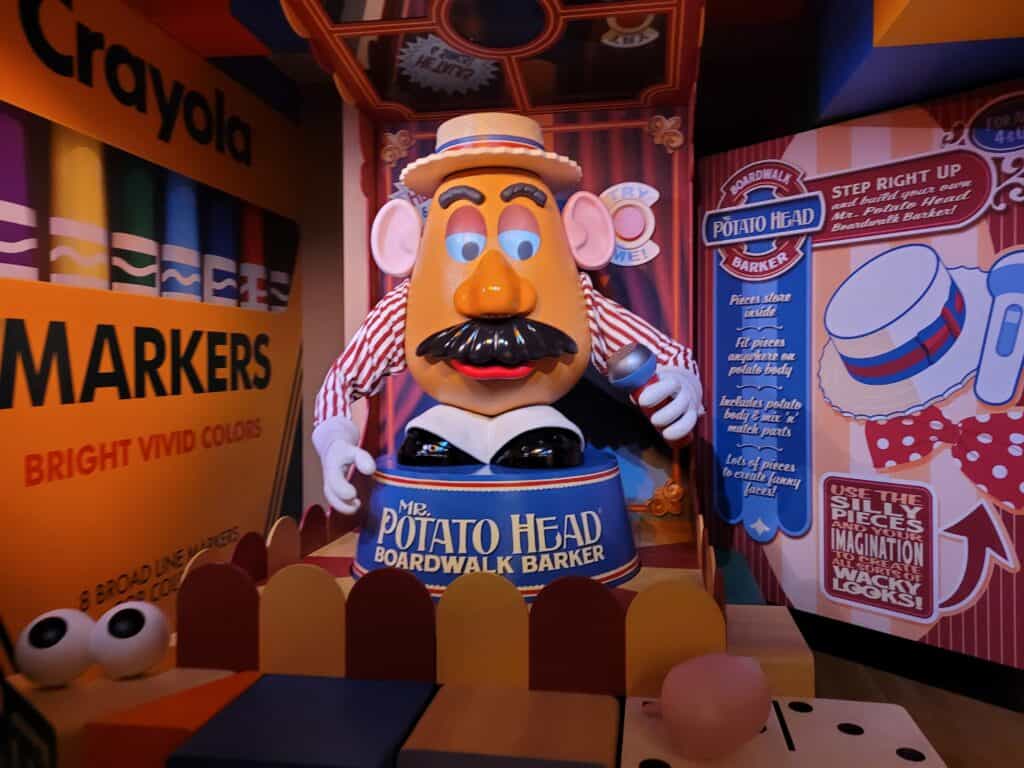 Further along in the queue, Guests encounter Mr. Potato Head, who has been given the special role of barker for the midway games. The classic character is decked out in a straw hat, striped shirt, and black and white shoes and is one of the most advanced audio-animatronics created by Imagineering. Not only can Mr. Potato Head remove one of his ears and place it back in, but he also interacts in real time with Guests as they pass by, making it a fun chance to have a special conversation with a favorite character. 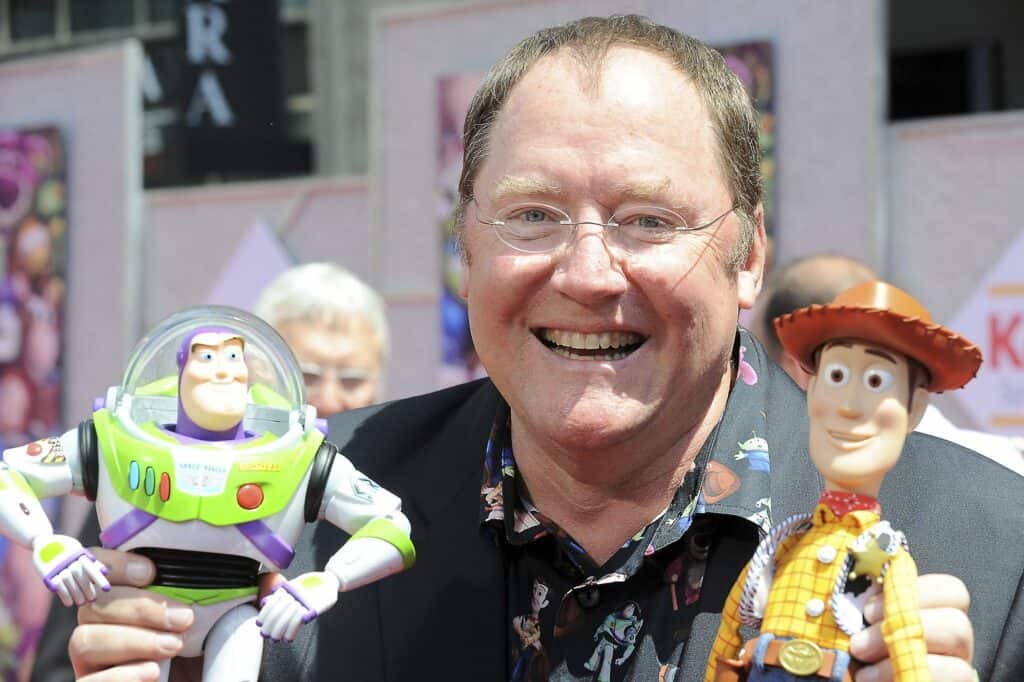 A Nod to John Lasseter

The loading area of Toy Story Mania continues the fun and charm of the attraction, with whimsical string lights hung above and the iconic cloud wallpaper of Andy’s room all around. Throughout the area, there are lots of great details including toys and books that Andy is currently playing with, and Guests who look closely can even spot a reference to a man who was integral in the creation of Toy Story. One book found in Andy’s room features the name Lasseter on the spine, referencing John Lasseter who has had a long career working in companies including Lucasfilm, Walt Disney Animation Studios, and Pixar Animation Studios, where he was a driving force behind many beloved projects including Toy Story. 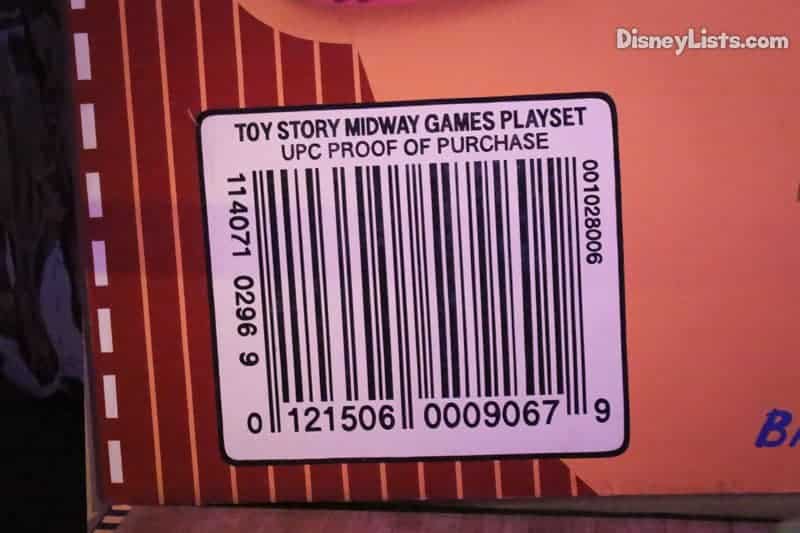 Once on board their attraction vehicles, Guests briefly pause underneath a large overhead archway that features the box that the midway games came in. Those who look to the bottom left of the archway can even spot a barcode from the box that might seem like a random detail but actually pays homage to the history of Toy Story Mania. A string of random numbers on the barcode reads “121506” which refers to December 15, 2006, the day that Toy Story Mania was officially announced to the public. 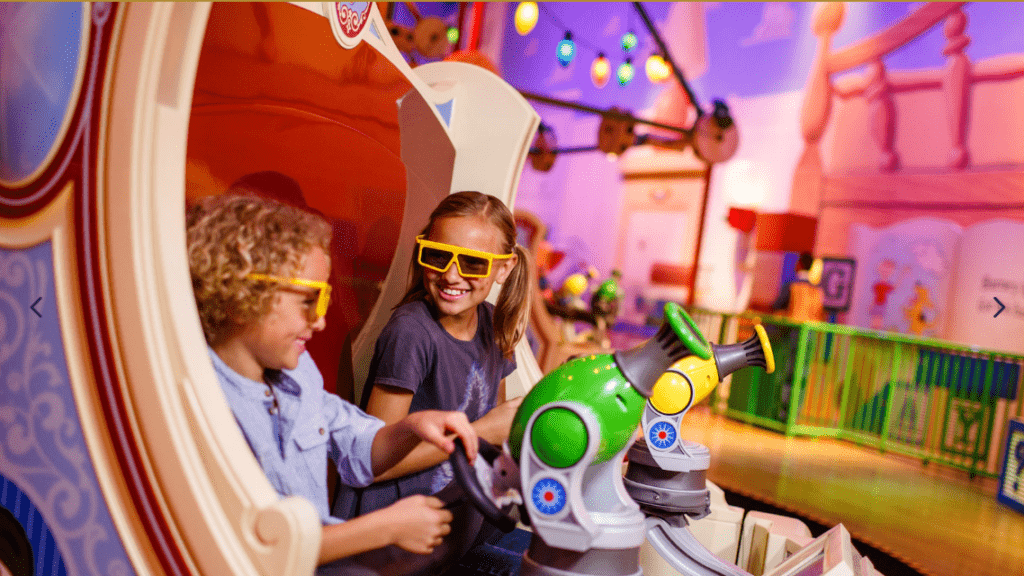 Each midway game encourages Guests to shoot away and score as many points as possible to gain bragging rights, and depending on the game, Guests can take aim at plates, targets, little green aliens, balloons, and more. Each game also features unique Easter Eggs, which are hidden sequences or triggers which unlock even more targets and higher points for Guests to truly score big. These Easter Eggs can be hard to trigger, but once Guests figure out how, they can always count on a high score! 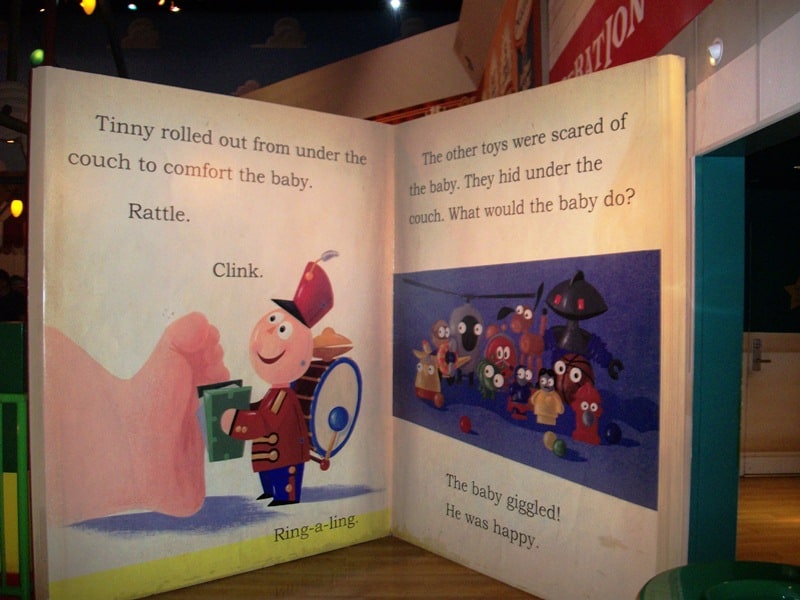 After enjoying the fun of Toy Story Mania, Guests return to the unloading area in Andy’s room and are again greeted by the iconic cloud wallpaper and fun details all around. After returning their 3D glasses and just before exiting the area, Guests can spot a Little Golden Book that has been propped open and pays homage to the earliest origins of Toy Story. The book is titled Tin Toy, which was an animated short created and directed by John Lasseter that Pixar released in 1988. The story featured a small toy that came to life and experienced an adventure, and was the direct inspiration that eventually grew into the beloved Toy Story franchise. 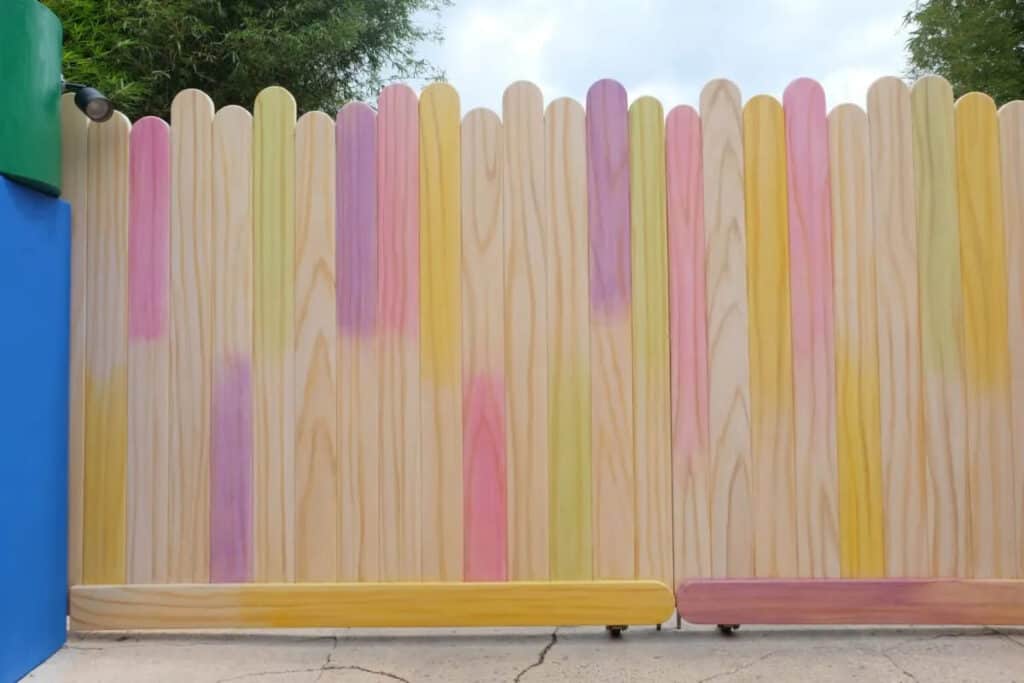 The exit of Toy Story Mania is rather lengthy and brings Guests through a series of indoor hallways before emerging on a winding outdoor pathway. While working their way along the outdoor path, Guests can spot a fun and unique wall that is a great photo opportunity. The Popsicle Wall has been constructed by Andy using discarded Popsicle sticks, and Guests can even spot colorful stains and guess which flavor each stick was. It’s a fun and unique background that makes for a memorable photo to commemorate every ride on Toy Story Mania!

Toy Story Mania 2022-07-20
Caitlin Kane
Previous: Cult, Religion, or Simply a Fandom: Do Disney Adults Worship The Mouse?
Next: The 2022 Wine and Dine Half Marathon Medals May Be the Best Yet